5e – Death in the Cornfields 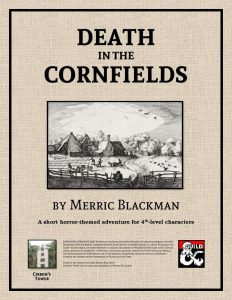 A scarecrow in a field can be a little unnerving, but what if the scarecrow is actually a young man close to death? Why has he been left to die, and what dark secrets do the farmlands hold?

Now that Dungeon Magazine is over I’m moving over to Pathfinder and/or 5e on the day we make sacrificer to Saturn. And if you’re a purist who doesn’t like it then piss off; I deserve a reward for all the suffering I endured in Dungeon. Although … I’m not sure why reviewing 5e/Pathfinder is a reward. Can’t you get an Enduring Hardship reward in Tales of the Arabian Nights?

This is a four page horror adventure, with one page being the title page. It could be one page. There’s almost certainly not enough here for an evenings play, but this were a road encounter or a wandering monster event in another adventure then I’d be gushing over it.

The party finds a teen tied up like a scarecrow in a field, relating that his possessed parents did it after he came home from friends. Lookin in on the friends finds a bloody scene with them dragged from their beds and decapitated. The parents are grief stricken when confronted, eventually perhaps noting that their son and his friends had been bitten by a vampire. Then the kid turns in to a vampire at sunset and tries to kill everyone.

“We left our son to die with the sun and decapitated his friends” is absolutly horror. The situations and scenes speak of terrible things and the imagery supports it well. Bloody footprints trail off in to a muddy trail that leads through a wheat field to the parents home … wheat fields as far as the eye can see, reinforcing the isolation and desolation.

Merric’s writing is good, even most of his read-aloud. “The afternoon is cold, wet and drizzle.” I think we’ve all suffered through one of THOSE afternoons. In fact, here’s his opening read-aloud in toto: “The afternoon is cold, overcast and drizzly as you make your way along the road. Around you are fields of wheat, stretching as far as the eye can see. The clothes of an ill-made scarecrow flap in the cold breeze.” Short, evocative. It doesn’t tell the party they are miserable, it represents data which will then cause them to think they are miserable. It doesn’t tell them they are in a desolate land. It shows them endless fields of wheat and lets THEM draw the isolation and desolation conclusion. Tis is quite strong writing.

And then he goes and FUCKS IT UP. Here’s the second and last paragraph: “Suddenly, you become aware of a moan coming from the scarecrow. Looking more closely, you realise that it’s a young man tied to a stake. What do you do?” That’s the same old generic bullshit read-aloud that we’ve all come to know and loathe. The word “Suddenly” has never been used well in read-aloud. Never. Ever. Have I read everything? No, obviously not, but I can assure you it is the mark of an amateur. Likewise the “Way do you do?” nonsense. It reminds me of a Choose Your Own adventure book written at a third grade level. When the text addresses the players the read-aloud sucks balls. And I don’t mean that in a good way.In another read-aloud section there’s a hovel with the door standing open. The text ends “Has something happened here?” If the read-aloud were good the players would all be thinking and asking each other that. By telegraphing it you break that sense of player accomplishment of figuring out the tony mystery of the door being opening signifying something happened.

There’s some gimpy shit in the adventure. Kid is left out in thew sun to burn to death, but the sky is too overcast to impact him. Hrumph. The parents saw the signs of a vampire attack, but its all healed by the time the party see him strung up as a scarecrow. Hrumph. I’ll accept his bad memory of the evening before, especially if Merric had put a big lump on his head, but the overcast and healing are pushing the suspension of disbelief just a little too far.

It’s a grim adventure. Parents make a terrible choice and are heartbroken over it. The bloody scene at the friends house. Potentially killing a teen who has not yet turned, knowing that he WILL turn, or at least suspecting it. Your friend was just bit by a zombie. Do you let them turn or kill them now? A hard choice in every zombie movie. (Except Fear the Walking Dead, where they are all too stupid to live, and Walking Dead, where your friend dies of boredom first.)

I take exception with the length. This could easily be one page long and I’d pay the same price for it. It’s padded with that sixth grade D&D writing style iwhich assumes every DM is fucktard with no ability to add 1+1. Some more personality for the boy, the dead friends, the parents, all would have gone a long LONG way to adding some lives role-play to the adventure. In the Good Place tv show Janet the hologram pulls out a sonogram and say “I’m pregnant!” in order to keep someone from resetting her. That’s the kind of stuff that would have been nice as details for the parents or kid. They across as just generic commoners and that’s too bad; its a miss to add yet another emotional heart tug to the adventure.

Backstory about the family once being prosperous and thus they once had a large nice farm and now that they are smaller its in ill repair is useless. It adds nothing.

Nice imagery. Brings the horror. Needs to be written for a fucking adult instead of ESL sixth graders.

It’s $1 at DMsGuild. There’s no preview. No previews make me sad. 🙁
http://www.dmsguild.com/product/180108/Death-in-the-Cornfields

3 Responses to 5e – Death in the Cornfields