Call of the Werewolf 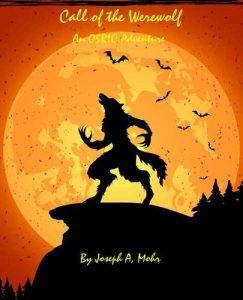 By Joseph A. Mohr
Self Published
OSRIC
Levels 4-7

Call of the Werewolf is a Free OSRIC adventure for characters of 4th to 7th level of experience. The adventurers arrive at a small village along the Blood River and discover that a Werewolf is terrorizing the locals. Brave adventurers are needed to solve the mystery of who the werewolf is and these adventurers must put a stop to this fiend once and for all.

This 43 page adventure, a light investigation and assault, details a small village and the manor home of a local lord. The village is suffering from attacks on its livestock. Clues lead back to the local lord, and werewolves. The investigation is quite simple, the text repetitive and unfocused. There’s some delight in the encounters, from mimics, to dazzling chandeliers, moving armor and paintings and the like. Those parts are charming and remind you of the reasons the classics are the classics. If you were desperate for an adventure this would be ok, and if the manor/dungeon were in Dungeon Magazine it would be Best Buy in that periodical. It’s got a decent classic vibe.

I HAVE to talk about the investigation first. I have to. It’s absurd. It’s so absurd that I luv Luv LUV it! When the players first walk up, at dusk, a few villagers are talking, having a heated discussion. They split up with one, the mayor, talking to you. Moments later there are sounds of someone being attacked by wolves. “IF the party helps then …” sez the text … but imagine for a moment if they DIDNT. They are trying to hold a conversation with a guy, who it turns out is the mahoy, while someone is being torn limb from limb by a pack of wolves just around the corner. Scream, maybe some viscera flying around the corner, all while the mayor looks on normally and tries to hold a conversation with some murder hobos … Classic D&D! A good DM troll and DM response to it. 🙂

Anyway, the entire investigation is like that. “Yes, our livestock is being attacked, No, we don’t know why/who …” with a wolf attack right next to it. Gee, think it might be wolves? “Our local lord? He lies in that big mansion over there. No, he doesn’t come out much.” Bad guy alert! Bad guy alert! The wolves all wear gold medallions with a big “M” on them … so do the local lords servants. And his name is Lord Medgar. And one of the wolves in the pack turns in to a werewolf to run away. Gee .. I wonder what is going on in this village? Now, players being players, they will miss the most obvious clues, but, geez man, this is so bad I’d play it comedically.

I already mentioned that the manor/dungeon has some classic elements. A nice mimic, a chandelier that dazzles. Animated armor. Fountains to drink from. I love that shit.

If this were well written then it would be a mildly interesting adventure with classic elements. But it’s not. It’s 43 pages of two-column for a small village, manor, and dungeon under it. That means unfocused writing.

I use that term a lot, lately anyway. I use it to describe a beginners/amateurs writing style. Someone has an idea and they put it down on paper without really understand how adventure writing should work. It could be formatting (which this adventure doesn’t have much of a problem with) or the lack of organization like summaries, overviews, and appendices, which this adventure could do better at, but isn’t terrible at, making an effort at some summaries. Frequently it comes from not understanding the purpose of the adventure and how the room keys, in particular, work toward that.

The purpose of the adventure is for the DM to run the game. It must help the DM run the game at the table. In the case of the room keys this means presenting information in such a way that it’s trivial for the DM to scan the text, describe the room, and respond as the party interacts with it. This is no trivial feat. You have to describe the room in such a way that it lodges in the DM’s head and they grok it, able to fill in details as needed. When they search the chest you need to make it easy for the DM to find that text and run the trap/treasure. Indents, bolding, bullets, italics, and a host of other techniques can be used to help with this, but evocative writing and editing can help even more. That room description has to be evocative. You get, maybe, two sentences to describe the room to the DM and lodge it in their head. “Large” and “Red” are not good descriptions, they are boring. But you can’t go on forever about the cavernous room with towering rust-colored banners. You can’t use a paragraph to describe a chest of drawers and the mundane items in it, or the mundane items in a kitchen or pantry. It’s not worth it. Focus on what makes this DIFFERENT than a normal pantry and gloss over the rest.

Here’s some text from a room:
The door to this room is unlocked. Anyone listening at the door to this room will hear nothing from inside. This room appears to be empty. It is also quite dusty and does not appear to have been cleaned in over a century. The dust here is thick. Awaiting the adventurers in this room is a particularly nasty and violent trap.

Six sentences to tell us it’s empty and dusty. In a well written room we know it’s empty. We know that you can’t hear anything because we know instantly at a glance that there is nothing to hear. We know there’s a trap because the trap is described. “Awaiting adventurers” and “nasty and violent” serve no purpose other than to clog up the room description.

In another location we’re told there’s a statue and that those statues usually have large gem eyes and ivory horns. Great! But then it says “Not this one.” Uh, so then what was the point? To bore the DM to death? It’s not a detail that’s needed and so thus it makes the DMs job harder. No, more is not better. It’s not better to have it and not need it. Put your shit in a god damn appendix if you insist.

While I’ve concentrated on room/key, I’d like to note that format is NOT appropriate for some things. The village in this adventure, for the investigation, is presented in room/key format. That’s TERRIBLE! This is a social environment, the personages are buried in their respective rooms with no reference. Their personalities and goals and what they know. You meet a guy on the street? Let me flip through the adventure and find the room key he’s in so I can figure out his personality and what he knows … is that how to run an adventure? Obviously not. A little table, with villagers names, the house they live in, and a fast personality and/or fact about them lets the DM run the adventure is a much smoother format.

This is free on DriveThru. The preview is six pages. Most of it is useless, but you do get to see the opening scene. I like the villagers discussion, even if I do think it could be written better/shorter. At least you get to see the whole gold medallion/wolf attack/werewolf thing. 🙂https://www.drivethrurpg.com/product/222818/Call-of-the-Werewolf?affiliate_id=1892600

1 Response to Call of the Werewolf