Tomb at the Dragon’s Spine 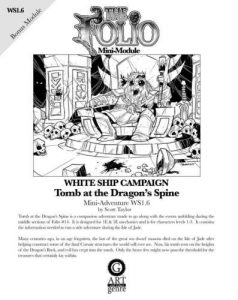 While crossing the deadly ‘Dragon’s Spine’ of the island’s interior, the party encounters a darkness at the heights. Within the ancient stones the tomb of one of the last sea dwarf master masons rests. Has the corruption of the island reached the tomb? Only exploration will reveal the truth, and the treasure.

This nine page dwarf tomb has twelve rooms in simple layout. There’s some effort to create an evocative atmosphere that doesn’t quite reach my, quite high, expectations. There’s also some above average effort to have unique treasure. This could be quite a bit shorter, with good editing. It’s not a throw-away but also doesn’t really strike hot. It would probably be fine for most people, if a little staid.

I want to talk some about the atmosphere the adventure is trying to create. Here’s some intro text, describing the mountain area where the tomb resides:
“There is a presence here, not something palpable, but an ancient aftereffect that pervades the very stonework of the hills. Crumbling stairs, moss- covered arches, and cleverly disguised passes around perilous rock faces and towering waterfalls seem to greet you at every turn. One thing is clear, whoever created this pass knew the subtleties of stone and kept their secrets well.”

You can clearly see where the designer is trying to go. I’d divide the description to two parts: impressions and conclusions. The first and last sentence fall in to the conclusions while the middle falls, for the most part, in to the description category. It’s that middle section that I like the most. Adventures are, I think, more successful when they concentrate on the impressions rather than the feelings. A good impression/description will create and communicate the feeling, without having to resort to saying it outright. Those bookend sentences almost fall in to the trap of starting with “You feel …” and I think that’s weak writing. Crumbling steps, moss-covered arches, hidden passes … those help communicate the conclusions.

Another example:
“Frost holds heavy to the dark earth along the bluffs to the east. There, amid a collection of tumbledown stone, the remains of several ancient plinths stand at odd angles. Somewhere beyond, a darkness lurks in the mists that collect amongst the stone.” Again, conclusions bookend a pretty strong impression. The first and last are, perhaps, trying too hard. I love the tumbledown stone and fallen plinths.Frost and mist can work well, along with the inky black opening, but the overly poetic language gets in the way of those impressions.

One chamber has pinprick holes in the ceiling letting in light, which is great imagery, but is surrounded by the drudgery of dimensions and the mundane. “A large forge, cold from ages of disuse … again, trying too hard. The adventure is best when giving those impressions and letting the mundane fall by the wayside.

Most of the rooms fall in to a page of bolded/read-aloud and then a couple of paragraphs of DM notes. The bolded read-aloud has the filler text, as does the DM notes. It flirts in to the realm of the conversational. “The trap cannot be disarmed but can be avoided” is the sort of detail that acts as filler, mundane details not needed that hides the better DM notes and evocative text.

The encounters proper are ok. There’s a trick or two, such as a stat-raising/lowering fountain. SOME of the treasure is good, like a lantern that doesn’t go out when submerged or a jade necklace that allows dimension door once a day. Then it falls down with simple things like +1 mace or +1 chainmail.

It’s a small simple tomb that’s supposed to be evocative and communicate a scary/abandoned vibe. The extra text detracts from that, impeding scanning and making one fight for the good bits.

It’s $2 on Drive Thru. The preview is six pages and shows you almost all of the tomb text. You can see good example of the text in rooms four and five. https://www.drivethrurpg.com/product/216048/The-Folio-146-Tomb-at-the-Dragons-Spine-MiniAdventure-WS16?affiliate_id=1892600

4 Responses to Tomb at the Dragon’s Spine