The Temple of Drawoh Rock 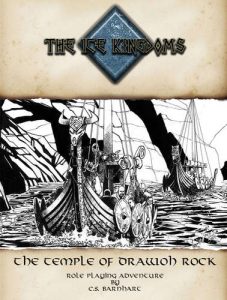 The Temple of Drawoh Rock is an adventure module for 1st level characters exploring the Ice Kingdoms. As warriors of Thane Ornulf the characters will sail the Atalac Sea, explore the Gate Isles, and raid the Monastery of Jove. But what starts out as a simple plan to rob some peaceful monks turns into a harrowing adventure as the adventurers cross paths with the machinations of a deadly sorcerer.

This is a sixteen page viking themed adventure about a raid on a monastery. The monastery is relatively small, at 11 rooms, but there is a sea voyage. It flirts with providing an evocative atmosphere, but ultimately fails to deliver on an evocative environment

This flirts with a viking theme. You’re all drafted to join your first raid , pretending to be a different viking group. There’s a sea voyage and then you end up at the island only to find the monastery empty, obviously having been raided recently. What follow is a slow forlorn explore with a slightly creepy vibe and a few monsters bursting out. There may be something like eleven rooms total and four or five monster encounters, mostly with ghoul-like monks.

The ship voyage has a nice wandering/events table with things like rocks with visible pearls … guarded by mermaids. Storm effects, and so on. The monastery text, while long-ish and unfocused, does present a kind of creepy ass vibe

You have to work for it though. The monastery isle is explained in the text, but a little simple overview map would have done wonders for it. There’s no shipmates presented, and only a throwaway reference, in about 3 words buried in text, of the leader of the expedition. But we do get a long paragraph describing the layout of the monastery … which is just describing what is on the map right above it. “At the far end is the alter (a) and to the north (b) and south (c) are two wings.” It goes on and on instead of concentrating on an evocative atmosphere. There’s a lot of art and large text … I’d estimate that only two or maybe three pages are the adventure proper.

This needs slightly more detail for the ship crew and leader, and a paring down of the text about the raid, the background, the boring minutia of the room descriptions. The treasure is generic. Religous artifacts, scraping away gold … there’s no specificity. I’m not looking for paragraphs, or even sentences, but SOMETHING is needed.

I’m being a little harsh on this. Most rooms are a paragraph or so, and it DOES provide a nice creepy vibe. It also feels overly sparse for the amount of text there is. One of the rooms is:
“
Much like the north wing, the south wing is a ten foot deep and twenty foot wide area that branches out from the nave. This area is the choir and has been built for acoustics. From this point, singing echoes throughout the nave and monastery as a whole.”

I think I’m turned off by the sparseness of the voyage/crew/island and the large amount of art … it feels like the things is SERIOUSLY padded out to make it to sixteen pages. That and the relatively abstracted treasure. But then it does things like say that if you scrape the gold off the altar then the potions and scrolls inside the temple don’t work for you … you’ve angered the god of the temple. That’s great stuff. And the bad guy sorcerer is nowhere to be seen,

This feels like a good adventure plagued by the need for a little more support in the crew and leader, and some better treasure. It also feels … incomplete. Anti-climactic, I guess. I’m not looking for a boss fight but it somehow feels unsatisfying. Maybe it’s the low treasure? I don’t know. It’s quiet, which is ok, but feels too sparse for what it is. I’m intrigued by it.

I don’t know. This review sucks.

It’s PWYW at DriveThru, currently at a suggested $1. The preview is seven pages and show you the wandering table, at the end, which I think it well done, as well as the long-ish intro. It does give a good viking vibe … but goes on and glosses over ship life too much.https://www.drivethrurpg.com/product/218033/Ice-Kingdoms-The-Temple-of-Drawoh-Rock?affiliate_id=1892600

2 Responses to The Temple of Drawoh Rock