The Submerged Spire of Sarpedon the Shaper 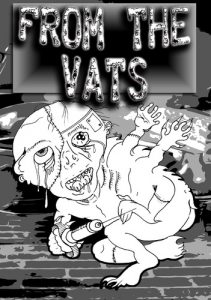 This is a 25 page adventure in the From the Vats zine. It describes a five level dungeon with 32 rooms of a sunken palace/home of a LONG dead sorcerer lord. It brings the OD&D and does a GREAT job of describing a slightly alien environment, underwater wizard, that is still approachable by the players. It brings the weird and it JUST on the normal side of gonzo, clearly D&D and yet a GREAT environment. The picture of OD&D. Vivid imagery, great encounters, weird treasure. It’s let down by the formatting, and deserves a second edition that formats it better. Oh, it’s been a great week! TWO great adventures this week, and, weirdly, both with an underwater component and/or ruins sticking out of the water. I’m bouncing in my chair; a clear indicator of being excited.

Crumbling steps spill from the shore directly in to the sea. A seaweed choked stone path can be glimpsed winding down in to the depths. A broken onion dome sticks out of the water, forlorn, the roost of seagulls. That’s good. It conjures up imagery and feelings. You build the rest of it in your head and any description that does that is the BEST kind of description. SHort. Puchy. Evocative. Easy to scan. It injects a seed deep in to your imagination and you get to build from it, the way a brain does.

Here’s another example: “A glass column dominates the center of the room, through which runs an eerie beam of green light. The column is cracked and filled with water; where the cracks show, motes of green light spill from the glass into the surrounding water. The light emanates from a hole in the ceiling at the top of the glass column. At its bottom, copper tubes run from its base into the wall. Clustered around the cracks in the column are many Luminous Jellies” That does a GREAT job of building a picture of the room. Great language, building, what do I see first and then what do I notice. I should also note that is just about my limit on schnitzengruben. Any longer and we get in to Pay Per Word dreck and problems with scanning. That description length is right at the limit of what I can stand to reference during play.

There’s reference material located after those descriptions. A description of the curse if you steal the giant pearl, or what happens when you touch the thing. The writing here is focused in a way that few adventures are. Evocative. Terse. To the point. Focused on PLAY.

The encounters proper are great. A floor, red from silt, that can get stirred up … FILLED WITH RED PARASITIC WORMS! Aiiii! Things floating on/above pedastals that you can fuck with, flicking quartz balls, a necrophidius that FEELS like it should be here! Traps of rapidly growing razor coral to trap you. The entire place FEELs dangerous, and wondrous, and alien,

I love almost everything about this adventure. There’s a nice little overview that describes the environment around the palace … as seen by the party when they approach. I wish more adventures did that to orient both the DM and players. The wanderers feel fresh, and those with a little description (more than just stats) have great little one and two sentence writeups. Those without don’t seem to need like, like schools of fish or luminous jellies floating by. They feel RIGHT and you want to use them and describe them. You’re excited as your mind races to find uses. The treasure is great, lots to loot in both “normal” treasure and in inlay pried from unremovable things and in the weird and wonderful magic items. There’s great guidelines for restocking and continuing time within the place as the party may return. Even the fucking underwater rules presented, one just one page, are not odious … which is indeed a feat! ANd the map, because it’s underwater, is essentially three dimensional with multiple entrances in to the location.

It does have a formatting problem. It’s BARELY acceptable. It generally keeps most of the description in the first-ish paragraph and DM’ish notes/reference material in the second paragraph … and that’s what I mean by barely acceptable. It’s uses single column, large text, and little formatting otherwise except giving some shading to monster stats to make them easier to pull out (great!) What this needs is some bullet points, indentation, more breaks, and occasionally a sentence moved around from the description to the notes and vicey versey. Techniques to improve the scannability and readability of the adventure. As is it veers quite close to the Wall of Text. That USUALLY means too many words but I think this is the rare example of focused writing that STILL faces Wall of Text issues. The rooms that use more breaks, and italics, and indentation (like room 15m the Hall of Bio Horrors) are the more readable ones.

Do Not be deterred! This thing is great! I’m fond of saying that most underwater adventures don’t FEEL like underwater adventures. This is by far the closest I’ve seen. It feels like a different environment, with the descriptions and encounters to match. Easily a keeper, even if it DOES deserve a second edition to take care of the formatting issues.

It’s included as a part of the From the Vats zine/thing. It’s $0 on DriveThru, which means you would be a FOOL to not pick it up, if for no other reason than to argue with me. The preview is of the zine, but the adventure is first in the thing so you get to see some of it. It’s just the wanderers table and the intro/overview, but I like both of those and while not the strongest parts of the adventure, they are QUITE above average. https://www.drivethrurpg.com/product/151451/From-the-Vats?affiliate_id=1892600

3 Responses to The Submerged Spire of Sarpedon the Shaper