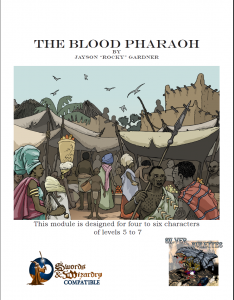 The party is hired by a caravan to guard a mysterious cargo. What can be so important to require a full group of 4th-6th level adventurers?

This is a 22 page “linear event” type adventure which has you escorting a caravan. Linear events. Nonsensical maps. Lots & lots of combat. At least there’s a lot of read-aloud? Oh … wait …

This adventure has some SERIOUS issues with making sense.

Ok, so Pharoah Bob goes to some kingdom and dies. His body gets shoved in a crate and a caravan hired to take him back home. This, then, is the very first thing in this adventure that doesn’t make sense. He appears to have no retainers and sending him home is done by … the king of the place he was visiting? Isn’t he supposed to be a living god, with lots of loyal followers? I can buy in to the dead foreign dignitary bit, but the rest of the thing makes no sense to me.

There’s a hex crawl portion. But there’s no hex crawl map even though it’s referred to repeatedly. Other wilderness maps have no scale on them … and I think it’s clear the scale varies widely on them. You’re supposed to roll twice per hex for encounters on a small wandering table … which has a 50% chance of having an encounter. And then at night you roll at least three times, meaning encounters are assured. This seems pretty excessive, especially for an early edition game with healing issues. And the wandering table, just listing a few monsters, can’t really support this quantity of wandering play. It’s like someone through it in as an afterthought.

The encounters are linear. “Night of day one” you get to have an encounter with a wild boar running through camp. Night three a demon shows up. Day three there’s some goblins up ahead. And so it goes. The read-aloud, of which there is at times PAGES worth (night three, I’m looking at you!) assumes you kill things. No talking to the goblins, the readaloud says “I’ve never seen such combat prowess!” and then goes on for a lot more …

This is just someone writing down some combat encounters and then expanding them with a fuck ton of read-aloud. Not even the addition of NPC’s named Magic Master and Stealthy Steve can save it from itself.

It’s PWYW from DriveThru, hanging out at $1. The preview is one of those “page flippers” and it WAY too small to read at all, only giving a basic overview of the layout style.https://www.drivethrurpg.com/product/220884/The-Blood-Pharaoh?manufacturers_id=11366?affiliate_id=1892600

2 Responses to The Blood Pharaoh