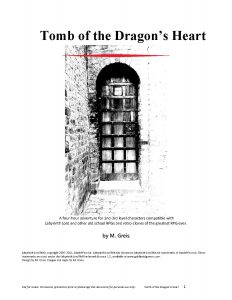 In the deep, it has awoken. Hidden in the ruins of an old dwarven kingdom awaits a powerful relic, and an army kobolds are on the march to retrieve it. Dare the heroes enter this ancient place, and will they find the relic before the army arrives. In a race against time the adventures may unleash the greatest evil, while trying to save the world from a grim fate.

This is a twenty page single-level dungeon describing an abandoned dwarf hold, with eighteen rooms described on seven pages.. Good factions and decent read-aloud and DM text make for a good journeyman dungeon. This does a good job of presenting a nice mythic vibe in parts of it, using some techniques from various blogs and media. I recall reviewing another adventure from Greis Games, The Sunken Temple, and was favorably impressed. A Danish translation, this adventure presents a good baseline level to measure adventure against. It covers all bases, from hooks to wanderers to encounters, at a level I find Acceptable.

Let’s cover that mythic vibe first. The adventure does a good job of making the events feel important without it being The End Of The World. In reality it’s no more important than the Caves of Chaos, but the difference here is that the threat FEELS real. The backstory is only a column and describes THE dragon. Not A dragon but THE dragon. This is a technique that can be used to great effect, presenting a creature as THE creature. The adventure doesn’t present the dragon as the only one, but the text implies it was the first with that name. A great enemy, defeated, but hanging on in death, now only its heart, made of gold, remains. There are several blogs describing this technique, and of course various media and folklore also. Calling it THE, giving it only a heart, of gold … it calls out to all of that folklore and imagery of our youth. It calls to its minions, a more subtle Suaron-like influence, even to the point of having a kobold shaman/prophet called Speaker for the Dragon … ala Mouth of Sauron. The halls are full of dwarf bodies, from a former battle with The Dragon, which adds to the SOMETHING IMPORTANT HAPPENED HERE vibe. Then it combines with some room elements that presents WONDERS in the dwarf hold as truly that, truly giving that feel of lost civilization greater than now that came with Moria and the like. This FEELS like an adventure in a place greater than yourselves, and its communicated pretty well.

To this is added hooks. Not just one sentence “caravan guard” hooks, but a paragraph or two for each. There’s enough detail to communicate motivation adequately and get the DM’s imagination running so they can fill in the rest. Then there’s the rumor table, telling you actually useful things about the situation in the dungeon, and other factions that may be present, all communicated in a style that represents a little vignette, in only two sentences. And then there’s the wandering table. Most of these, creatures and events, have a little bit more to them, so they are doing something. Even the ghouls are “responding to noise and on the prowl”, the shortest, conjures up imagery of them crawling along, furtively, looking for their next ravenous meal. Finally, there’s the timer. How to solve the one hour work day? The Dragon calls to its old followers and a large band/army of kobolds is responding, you can hear their horns and drums in the distance. There’s this sense of potential energy in it. And then there’s the factions: a bugbear and his band, the kobolds, an NPC treasure hunter party, and a religious sect that wants to bury the dead dwarves. This liven the place up and it truly feels like they add to the mystery and turn it from a hack mission to an exploration mission. I note that several of these elements, from the timer to the factions, were also present in The Sunken Temple, and in both used to good effect.

And, as in The Sunken Temple, the read-aloud and DM notes are both a strength and weakness. The read-aloud only lasts couple of sentences but does a decent, but not rockstar level, ability to convey a feeling. Wisps of web sway in an unseen breeze. Air heavy with dust. Bodies covered in cobwebs and white and black tiles covered in dust that make them appear grey. Stones are “mighty” and there are sounds of dripping water. And then there’s “for awhile you lose all sense of time” and “you’re brought back by …”, these first person sections being the weakest of the writing. Likewise the DM text could be a little more focused and formatted a little better to call out different sections better. Which is not to say its bad, but just that its not perfect and little more thought and focus could really punch it up a lot. The mundane treasure usually gets a little description while the magic items tend to be just book items “a potion of levitation” and could use more improvement.

The initial text, up to the keys, is a good “read once” type that you should not have to refer to again and is a quick read with bullet points and call out. The “appendix” information after the keys is most monster stats and the like, leaving the encounters proper a feel of a separate section that you can reference … which is exactly what I’m looking for in a supplement.

Multiple entrances, a chance to make a pact with the dragons heart, or abuse it for power … there’s an interactivity here that most adventures lack.d

This is $2 on DriveThru, and worth every penny. The preview is six pages and shows you the background, hooks, rumors, factions, and wandering monsters but, alas, no actual encounters of the read-aloud & DM text. Still, I think you can get a good idea of the “read once” nature of the intro portions and it can get you excited about running it.
http://www.rpgnow.com/product/216364/Tomb-of-the-Dragons-Heart?affiliate_id=1892600

2 Responses to The Dragon’s Heart