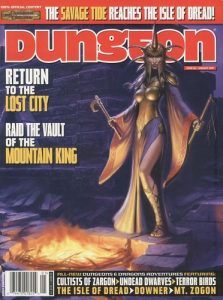 Masque of Dreams
By B. Matthew Conklin III
Level 1

Masquerade ball. Oasis. Archeological dig. Drugged food. Pretty close to shitty trope bingo! This has a social/ball/roleplaying element that then changes when the ball attendees all (except for the party) become drugged and behave bizarrely before goblins show up to attack. Tracking them through the desert the party arrives at a camp, kills the boss, and save the kidnapped guests. The adventure gets the NPC’s right, using the masquarade to give them a ‘look’ that is simple but memorable, and giving them a solid roleplaying personality, both before and after the drugging. Simple, iconic, and terse, at least as far as Dungeon is concerned. The vulture mask people follow the party around waiting for them to kill something, talk about how things taste and how to dispose of the bodies, etc. They could use a summary sheet, and there are probably too many of them presented for the amount of ‘action’ in the adventure. IE: they would work better if the “ball is attacked!” portion of the adventure was a bit more in-depth. There’s also a mix of events, room descriptions, and NPC descriptions scattered willy nilly, in a room based description style that doesn’t work with a social adventure style. It’s disorganized and hard to find things. I THINK it’s trying to be open, almost like a sandbox, with the monsters/attack, but it comes off as just some loose notes with not enough structure to support the other material. A complete rewrite would save this … and it might be worth it.

Here There Be Monsters
By Jason Bulmahn
Level 7

Your ship crashes on the Isle of Dread and you need to travel overland to get to a colony. What follows is a linear group of set pieces broken up by unavoidable events. T-rex attacks on the beach. Herbivore attack. Gargoyles on a cliff. Demon ape kidnaps a party member, and you go to the temple to rescue them. The encounters are ok but it FEELS like a series of linear set-pieces, surrounded, of course, by too much text. There’s a nice little mini-Moria where you have to go through a small eight room ruins to get through some mountains to the other side. The pieces ARE iconic, but there’s no chance to really do anything but stare blankly and roll dice for eventual outcomes. It’s hard to get in to something like this. This reminds me of those shitty ass DM’s who think they are “telling a story.” I can’t imagine anything more boring, iconic set pieces or no. You know it’s a set up. Why care? But … I still like the individual encounters. 🙂 They are just too long.

This is a short eight room tomb to retrieve a stolen artifact for some dwarves. WHo are pretending to be good guys but are evil with a ring of mind shielding. Ug. A sure sign of lack of creativity. Anyway, then you’re supposed to go get the artifact back from the evil druids the dwarf dude gave it to by invading a small underground/cave fortress with a dozen-ish rooms. It’s just an excuse to roll high-level trap saves and hack everything. It’s also COMPLETELY unclear to me how you find out the dwarf was tricking you. He thanks you for getting the artifact (the first time) then turns flies off with it. These high level adventures are such a disappointment.