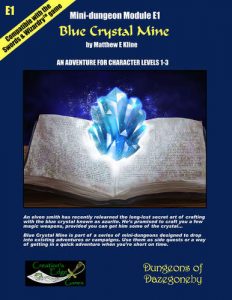 An elven smith has recently relearned the long-lost secret art of crafting with the blue crystal known as azurite. He’s promised to craft you a few magic weapons, provided you can get him some of the crystal…

A fourteen page adventure with eight rooms in an old mine. I wish this adventure, and all of its cousins, did not exist. Boring, adding nothing of interest or indeed any detail beyond the barest of bare bones, but expanded upon with great vigor of writing. There is no reason for this to exist, let alone be charged for.

Eight room abandoned mine, four bandits in the entrance their leader in another room and a giant spider in a boarded up barracks. The back half is caved in, with a couple of giants ants and a crystal imp back there. There’s an arrow trap on a door. I have now provided you 95% of the content of this adventure in far fewer than 14 pages. I know, I’m prone to hyperbole, but, seriously, I just described the dungeon to you. The actual adventure offers almost nothing else that I didn’t just describe. The text is expanded upon, but, I’m not even sure it adds that sort of mundane detail in which I loathe so much. It’s just circular, describing nothing in quite the verbose manner.

An empty barracks room with a few generic things in it. The same, bt this time the room has a giant spider in it. The same, but the bandits leader is in it, who, of course, chalks up the slaughter of his men to them fighting … so there’s a pretext for him not leaving his room. Everyone/thing attacks on sight. There’s no nuance. There’s nothing interesting. Open door. Monster attacks. Kill it. Move on.

When you buy an adventure this is exactly the sort of thing you are afraid of: nothing of interest. Look, an adventure doesn’t need set pieces in every room. Or ANY room. But you have to add SOME value. The fourteen pages of this adventure add almost nothing to the three sentence description I offered earlier. This is like one of those procedurally generated news stories. Write an app to generate maps and random dungeon with random dressings and charge $1.50 each. Churn it out and ‘win’ by flooding the market and making it impossible to find things of value. THERE’S NOTHING IN THIS.

It’s $1.50 on Drive Thru. The preview of four pages, including the cover, and shows you nothing of the room design.https://www.drivethrurpg.com/product/214985/Blue-Crystal-Mine-A-Swords–Wizardry-MiniDungeon?affiliate_id=1892600

3 Responses to Blue Crystal Mine