C1 – The Mortality of Green 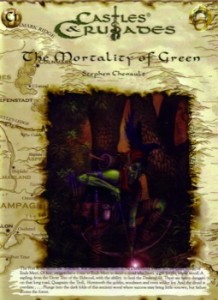 This is an adventure module for Castles & Crusades, although it can be used with any pre-4E D&D version. More conversion details near the end of the this review.

This adventure has a long history. It appears to have started like in 2000 as a d20 adventure with a generic version also available. The Castles & Crusades version came out in 2006. The history of the product shows. It is very much in the style of the d20 adventures of 2000, meaning that it’s a plot based adventure heavy on story. The story is not particularly unique: Evil tree in a dark forest directs minions to steal pure sapling. Party gives chase and confronts minions and tree. It does have a very strong aspect to it: the campaign setting.

The entire feel of this adventure is one of a dark, but realistic, fairy-tale. It is set in a dark forest environment, full of damp and with dense thickets and ancient trees cut through with bright glades and babbling brooks. The residents are fantastic but given a bit of depth and pulled back a bit to give then a realism. For example, there is a women in a small village tavern that is ugly and large, with hairy knuckles. Her description seems to indicate that while not attractive, she’s not necessarily outside of the human norm. Her stats list her as an ogre. The same village has a beautiful woman with a morose streak. Turns out she’s a dryad who’s tree was killed. There’s a potential encounter with a mad little gnome, of the more traditional fey variety, in an orange hat who eats fish and lives under a tree. Everything in this module has that same sort of feel. As if were set in a German forest and you stepped JUST over the line and crossed in to fantasy. A feeling of just barely fey. The cover art does a pretty good job of depicting this atmosphere. And yet there are fantastic elements. Horntooth the goblin bandit and Quagmore the Troll Lord are both clearly fantastic, although with a very strong fey leaning. This kind of setting appeals to me immensely and I found myself wanting more … so much so that I may break my long-standing pledge to only buy modules. This is one of this modules strongest points.

Although the module has 24 pages there are really only three encounters, with a few optional ones thrown in. There’s the kick-off/hook encounter, a decision point encounter that probably involves no fighting, and then the climax encounters, a set of three fights in three nearby locations. The rest of the module is filled with backstory, descriptions of locations, motivations, and so on. For example, the DM is encouraged to get the party to follow the marauders trail after the hook encounter. Something along the lines of “do everything reasonable to keep them from doing something other than following the trail.” There then follows a 5.5 page description of the town of Ends Meet, and a small adventure there, in case they continue on their journey. And if they do so then they essentially fail the adventure and will not find the other locations. Although there will be no immediate effect to the local environments for failing. It’s a very confused kind of thing. The side-trek and the village descriptions are very nice and extremely evocative, but seem very out of place.

The chase through the forest after the marauders is going to take DAYS, which is something many parties may not be accustomed to. There is a nice set of wandering monsters provided, with a check being performed six times a day and six times a night, with a 1 on 12 indicating an encounter. The creatures are nice for a dark forest: a hill giant, a Will-o-Wisp, wild animals, spiders, exotic fey creatures, and others. They all have a pretty good fey feeling, except perhaps for the orcs that are listed. The only reason I can accept goblins as fey is the strong write-up and cover art. Yes, I know they SHOULD be fey, but they’re used so much as sword-fodder that it’s easy to loose sight of their fey heritage. There are a couple of optional encounters. The village and side-trek adventure it contains would be one of them. There are two more, both of which _should_ be handled by diplomacy. They provide a very strong yet subtle fey feeling as well. The gnome fisherman I mentioned above is one of them, and the goblin bandits another.

This is, at it’s heart, a small little adventure. There is a significant amount of exposition in it that helps contribute to the atmosphere. Every small locale in the general area has a nice multi-paragraph, at least, write-up that is full of flavor and atmosphere. The creatures are either human stand-ins (orcs, goblins, etc) or are fey with their trickery-like powers. The magic items are fairly typical, with little in the way of customization. That’s not so great; I expected more in that area given the atmosphere of the module. The maps provided are regional level maps and perhaps a large area map or two. This is not a tactical module in any way.

This is available at Drivethru.

2 Responses to C1 – The Mortality of Green