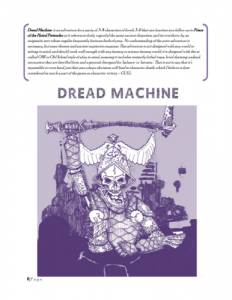 This 52 page adventure describes a cavern and the machine at the heart of it, that can resurrect the dead. Three’s a small region presented around it, with the cavern locale having about five encounter areas, each with about five more keys, and then the main area with about twenty-one keys. Gus has a very descriptive and evocative writing style, although it gets verbose. The maps are cramped, but the entire thing is imaginative and full of interesting rooms to get in to trouble. He does a great job on imagination but this could use a good trim to make scanning/use at the table easy.

I sometimes talk about hooks appealing to players, and this adventure is a good example of that. Anything can be a quest, but if you can integrate your adventure in to what the PLAYERS want then they’ll be a lot more motivated to not jack around and be involved in the adventure. At some point resurrecting the dead is going to come up, either because of some plot of the characters or because one of them died. That’s where this adventure comes in to play: it features a giant machine rumored to bring back the dead. And it does! Instead of it being a screw job the party can instead find a machine that uses souls to bring the dead back to life. The ‘souls’ thing is going to limit it’s power, but even that opens up more hooks for the players. This is more than the usual fetch quest or hired by blah blah blah to do something. There’s personal interest at stake.

Gus does a good job with creating evocative environments with his writing, interesting things in the room/areas to interact with, and encounters in which there is potential energy. Farmers, hunting the party for a perceived slight, led by Pops Bonder. Zombies lurching hungrily, trailing eviscerated innards. A black pueblo under a curving cliff wall. A room braced with massive tree trunks waxed to a high sheen. An artificial wall covered in a maze of gears, pistons and metal plates. Gus presents a situation and dares you to go forward, giving the players a choice in their doom. An obvious blade trap over a door invites you to climb the wall and try to disarm it. A room has a whirling vortex of blue energy. A catwalk is covered with a slick oil … with a tantalizing view at the other end. The encounters invite the players in to them, almost daring them, tempting them.

The entire place feels coherent, alive. The farmers in the surrounding barren yellow plains make sense. The caves around the Dread Machine fit in with the farmers and the machine. The rooms of the machine are tied back with theming that’s obvious and not buried. The place feels different but not in a gonzo manner … at least until the machine proper is reached. The treasure, both mundane and magical, get just enough description to make interesting and more than throw-away items. A destroyed staff of the magi with some power remaining (inside a blast crater in the mud), a lump of golden metal (formerly a delicate thaumaturgical calculator), a gold ceremonial shark mask inlaid with mother of pearl.

The writing, colorful and evocative as it is, is also verbose. We’re not talking Dungeon Magazine standards, but it’s not uncommon for there to be two encounters per page, each being about half a page. There’s a header/summary at the start of each, so it’s not quite as bad as I imply, but it is still quite lengthy. The Secret Shrine has four paragraphs of text to describe a shrine with a treasure hidden in an idol. Two paragraphs paint a rich picture of the room while two more describe the hiding place and the treasure. “If the totem’s head, a twenty pound hollow ovoid of iron plate with indistinct features, is placed on the altar, the altar’s secret compartment slides open with a hissing gush of steam” That’s a great description. Or “Above the altar is a rough metal totem cobbled together from plates of black iron, welded and joined with thumb sized rivets.” Again, another great description. Almost EVERY sentence is a great description. But there are too many. It makes it hard to scan the text and find what you need to describe NOW.

There’s an attempt to mitigate this with a header section for each room. It describes the rooms appearance, smell, lighting, traps, treasure, and inhabitants in a little offset section. In theory this would be great. In practice … not so much. The summary attempts/descriptions are not particularly strong. “A dusty shrine to evil gods. Racks of skulls line the walls around crude totem and alter. Secret door on East wall to #3.” Both the initial “dusty shine” sentence and the “secret door” sentence are redundant. Instead telling us it’s a “crude black iron welded crude humanoid totem” and an “chromed sacrificial altar with pipes”, or something similar, would have helped. The players just walked in. What do I need NOW? Then the summary can kick in. And while they debate I can then scan the main text, which can call out important features with bold, or underline, or reformat so the more important sections are near the front of the sentence. That there fancy font don’t contribute to readability either.

The maps are a bit of a pain also. They range from half-page to third page creations. “The Black Pueblo” gets a little half-page isometric thing, trying to show the interior and exteriors of a location with ceiling access on moth rooms. The shading used to do that makes it seem a little busy. The map of the main location, a traditional map, has four levels snugged in to about a third of a page. It’s readable, but just, and a squinty chore that doesn’t exactly contribute to ease of use.

This is grade A highlighter fodder. It’s evocative. It’s got loads of interesting encounters. But it’s too verbose, which tends to hide what is going on in the rooms. The writing needs more focus on the editing side. I LUV those painting with a lot going on in them, every time you look you see something new. This adventure is like those paintings. Wondrous to enjoy, but if I tried to give you directions using the painting you’d get lost.

It’s free at Dungeon of Signs blog. Take a look at page eight for a nice wandering monster table, full of color. Pages eleven and eighteen have good sample maps to illustrate my points. The Secret Shrine room is on page twenty. Take a look at the summary section and then revel in the descriptions underneath.
https://drive.google.com/file/d/0B_4yfZaJH0e5Y2k5RzEtSURjUTA/view