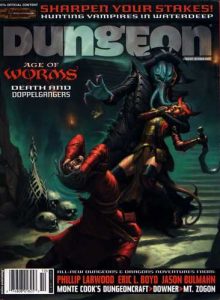 Do you want something other than linear combat adventure? Then Dungeons & Dragons is not for you. After wading through all of these Dungeon Magazines, the Internet shift to the OSR makes complete sense.

Why are you still reading these “Reviews”?

The Hive
By Phillip Larwood
Level 5

The Hall of Harsh Reflections
By Jason Bulmahn
Level 7

Part blah blah blah of the Age of Worms adventure path. It’s hard to muster much enthusiasm for these. Gate guards abuse you, a couple of COMPLETELY telegraphed street encounters. A fight in a bar. Raid the doppelganger lair. Raid the mind flayers lair. “Oh no! The chimera in the parade has escaped!” Who cares. “Oh no! Combat in the bar!” Who cares. Some attempt is made, in the beginning to add a bit of variety. Wanderers include bandits, who flee when one of them is killed, and trolls, bitching about some adventurers that raided them. The corrupt gate guards exemplify things. They try to shake you down. They bake off if you insist on your innocence. What if you just kill the fuckers? Are you prepared to deal with that? I mean, the designer instigated the scenario and killing the asshats is certainly in the cards. Pages of text is used where a couple of sentences could suffice, especially for the shit that passes for “adventure” in this thing. The man behind the curtain is boring.

Vampires of Waterdeep, part two. This is a 36 room dungeon with a decent looping map. It’s at its worst when it’s engaging in Forgotten Realms simulationist/historically accurate fetishism, with mountains of text and long ineffective read-aloud. Lots of opportunity for useless background data “A year ago a destrachan crawled up from the underdark and fought some adventurers and died, resulting in this rubble filled room.” Note the contrast between this “explaining why” and Curse of the Shrine Goddess, where stars disappear from the sky with no explanation of why. One concentrates on play and creates fun. The other concentrates on some historical novelization of the adventure, and sucks shit. There’s some flying finger/hand monsters. Those are nice. The whole plot thing is is garbage, but can be easily ignored, thank god. Not odious, just not good.