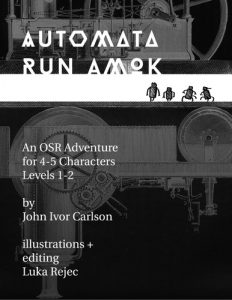 Out-of-Control automata have driven a wizard from his shop. He would like the PCs to solve the problem (without damaging his creations) while his rival will pay for evidence of the wizard’s dabbling in forbidden knowledge.

This is a 22 page adventure in a wizards tower with about nineteen rooms. It’s laid out quite well, using a bullet-point style, and has several great new monsters & magic items/treasure. The tower is in a city and there’s enough extra detail about the city to allow the DM to spice things up a bit before, during, and after the tower adventure. It’s a little one-note for me, being just “monsters in a guys house”, without the house itself adding much. It’s PWYW, so for a $1 it’s worth checking out the interesting format used.

The adventure is laid out in three sections. The last section is the appendices, with the bestiary, magic items, and the like. The middle section is JUST the wizards tower, and it’s laid out in landscape format, further delineating it from the first and third (last) portions of the text. The first section is all the introduction, lead-in, context, and follow-up to the keyed encounters. I find this quite interesting. It recognizes that the adventure is really in two parts: the dungeon and everything else. It’s a small point but I think it shows that the people behind this really thought about how to use the thing. In addition to this the monster stats are found on the map of the wizards tower (which has a front door, back door, and balcony entrance!), allowing for a quick reference kind of thing, and little mini-maps are scattered throughout the dungeon pages, on facing pages. Again, the way these features contribute to the actual usability of the adventure is quite nice.

Complementing that is the format used for the rooms. Each room has one sentence, which could be mistaken for read-aloud, that gives the vibe of room. FOllowing that are some sections headings like “Occupants”, “Exits” and then room features like “Shelves” or “Display Case.” Under each of those section headings are some bullet points, one per interesting thing, with some text. What this results in is a way to quickly at a glance scan the room to relay information as needed. It’s like heaven after all of the wall of text stuff I’ve seen!

Copy/Pasting a room wouldn’t do it justice. Here the “description” for the study: “Expertly staged salon for impressing clients with plentiful money but little sense.” That’s followed by several section headings. One for Exits, another for bookshelves, fireplace, and high-backed chair. Thus we now know, at a glance, that bookshelves, a fireplace, and chair are major features of the room. For the fireplace we get the following:
Fireplace:
• Imposing stone replace occupying the entirety of the study’s western wall
• Stocked with Birtmin logs, which release a heady scent and blue ame when burned

Just the basics, expertly arranged for use in play.

This is all augmented with a nice little section at the beginning, about a third of a column, describing the city and major events going on, complemented by a couple of great tables that describe some random encounters, etc, tied in to city events. It’s a nice little additional that really supports the DM well in bringing THIS city to life. The adventure pretext provides, in very little space, five different ways to get the party involved in the adventure, all related. Two groups on the docs, some beggars, some children and some shop folk. Eventually one of these is going to catch the party’s eyes. It’s a great example of providing multiple opportunities to hook the party without it feeling forced. Those hooks are complemented by the nasty little guys who are interested in the party’s services. Academic, rivals, guild members, they don’t like each other, and thus you have the opportunity for backstabbing as well in some loose “outside the dungeon” factions/complications. (The preview on Drivethru shows most (all?) of this lead in to the dungeon proper. I’d check it out!) Scattered tips through the adventure are also pretty useful for running the game. It has a nice little “Playtest notes” kind of vibe to it. Finally, ALL of this is complimented by the art for the monsters. I don’t usually mention art; I think I have only a handful of times. The monster art is quite nice in evoking imagery, particularly the “Undying” piece in the bestiary. The treasure, both mundane and magical, is well done and a cut above the usual book items.

Clearly, I want to like this adventure, but it’s got a problem. It’s flat. Or maybe I mean One Note. The amount of interactivity is a little low. Other than the monsters roaming about, the rooms proper don’t have much going on. Oh, there are details. And things to look at. And things to search for loot. But, other than the combats … there’s not much else to interact with. It’s a bit like walking through an Ikea, except some rooms have a monster in them. You look around. You pick things up. You move on. Without the extra interactivity of the tower you’re left with the room descriptions being out of place. By this I mean that MOST of the descriptions are superfluous to the adventure. The fireplace, above, doesn’t actually have any impact on the adventure. It’s window dressing. As is almost everything else. An item or two serve to house some treasure but the rest just EXISTS, as if you’d succinctly described the major features of the rooms of your house. It’s not that I don’t like window dressing. I think it can do a good job helping a DM paint an evocative picture of a room. (Sometimes …) But in case it’s ALL window dressing. Or, close enough to “all” to be functionally the same. That same sort of thing DOES contribute to a more dynamic combat environment. Monsters climbing shelves, pulling the shelves down. Using an large armchair in combat, all of that is great detail for rooms in which combat might take place. I know this isn’t DCC, but a dynamic environment is still appreciated, and the rooms, with their descriptions, certainly do provide that. I might be a little unfair with this. I seem to be saying it’s not a classic exploration tower. And it’s not. The adventure is more of a “clean the spiders from the basement” variety. If that’s all you’re looking for then this does that and does it well.

It’s Pay What You Want on DriveThru, with the preview being most of the first third of the adventure. IE: everything that’s not an appendix or the dungeon proper. I think the preview is worth checking out, and the adventure proper, also, for the formatting/layout used, if nothing else.