The Mines of Wexham 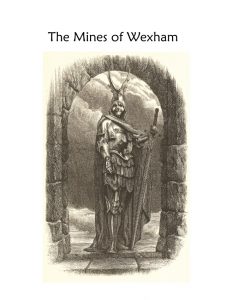 This thing goes by Mines of Wexham and also by Mines of Wexcham. The adventure says Wexcham while most of the marketing/references not in the adventure refer to it as Wexham. I believe the designer has passed away since publishing, and I think I tend to grade on a curve when details like that pop up. Be Warned.

This is a nineteen page adventure in some old caves/mines with small wilderness portion. It has some of the charm and all of the problems that one would expect from an pre-1975 adventure. Minimal keyed in places, weird formatting & layout that do NOT contribute to usability, and, in places, the idiosyncratic encounters of imagination before rules. I’m not sure what the history of this is; it looks like a kickstarter add-on, but I THINK it’s a new adventure, not a find from pre-75.

You get a map that shows the supposed location of a legendary lost mine from an ancient empire. It’s three days by foot or a day and half by ship. EITHER you’re playing the pre-gens provided OR they are a rival NPC party (or, more specifically, YOU’RE the rival party to them!) Anyway, off to the mines you go. The mines are presented on three maps: the ground level, an old troll cave, and the underground mine map proper. The maps are basic but well done, by which I mean they provide the complexity required to run an exploration adventure. Loops, with all three maps connecting, and multiple entrances/exits from the maps lead to an element of mystery, with about 34 locations total across the three maps.

The encounters fall in to three types. First you have the traditional minimal keys. “6 giants rats” with stats, is the total of the encounter description. Two trolls. Four spiders. You get the idea. The second type is that of the “old room.” The old room has something old in it. Duh. 🙂 Some old bones. Some bits of leather. And then when you touch something it disintegrates due to age. These almost always have some sort of clue or minor treasure associated with it. Finally, there are the Type III demons. These are the core rooms with something nontrivial in them. There’s really only one or two of these, and the clues and several minor treasures relate to it. There are ghostly soldiers in the mine (but … not actually undead that can be turned …) They attack those not associated with their old empire. You can find some objects, like armor with insignia, that let you pretend to be old empire soldiers also. Eventually you find a banner which will allow you to command them. The clear presumption is that you will use them to attack … the room with seventy orc warriors in it … Yeah. The last couple of rooms have masses of orcs in them.

The wilderness adventure is laid out on a day by day basis. One day one roll for wandering monsters twice. On day two rolls to hear a howl in the distance. On day three … and so on. If you instead choose to go by ship something similar ensues, except the DM gets to roll every other TURN for monsters … and if you roll a 6 you see a pack of sharks in the water … This is all mixed in with what I presume to be read-aloud, not set apart from the text, and the phrase “How do you wish to proceed.” It all a colossal mess. You can decipher it, but it’s VERY stream of consciousness. The “Wish to proceed”, being used as a section break, tapers off through the adventure, disappearing halfway through the mine room descriptions. To be fair, the nonsense settles down by the time you reach the mapped/keyed encounters with only the introductory pages and wilderness adventure being victim to the issues.

There’s a certain nostalgic charm to this adventure, that kind that comes from the early days. A clumsiness of format/layout combined with the sorts of minimal keying with the sort of embedded-adventure that one would find in B2/Borderlands. The kind that fights you all the way. A good DM can take this and run the hell out of it. But then again a good DM can do that with anything. It’s hard to suggest this, even to the nostalgic crowd. Other older products, like Dungeon of the Bear, conjure much of the same vibe.