They Met In A Tavern 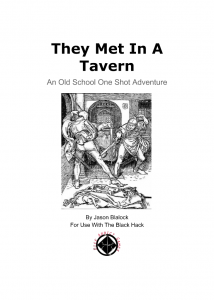 About a day’s journey by loaded wagon from a good-sized trading city, at the edge of a small farming community, sits a moderately successful inn and tavern called The Merchant’s Rest. Due to an unlikely confluence of circumstances, four exceptional people with as many reasons to mistrust each other as they have to cooperate, are about to caught up in a tide of violence and dark sorcery which will threaten not only their own lives but those of the local populace.

This is a 21 page adventure hook. A one-shot, set in a tavern, provides a VERY strong initial set up position in a tavern … and then says “wing it” for the rest of the content.

There’s an inn/tavern on the edge of a village. Four pregens are there. The scholar (a MU) has rooms. He’s got a bit of a heretical past, but s tolerated by the authorities because of the help he provides. The stablehand/blacksmith is a former soldier (a Fighter) in the religious wars. The Pagen (the thief) is cousin to the stablehand/soldier and has gotten himself in to DEEP SHIT, because of a cult he joined and an artifact he stole for them. He’s come to the soldier for help, who wants to introduce him to the Scholar for help. The Inquisitor (cleric) shows up to see if the Scholar “yet remains a friend to the faith.” Very strong archtypes.Very strong backgrounds. Custom made to interact with each other and generate conflict. I can’t emphasize this enough. I have played in a shit ton of con games with pre-gens of every style and RPG imaginable. These may be the best four pre-gens I’ve ever seen. Usually you’re lucky to get MAYBE one in eight with a background this strong. They have a relationship with each other. There’s this simmering tension, massive loads of potential energy, buried in the relationships with each other. And yet probably no outright conflict. All done in one digest page each, with an OVERLY generous font size, line spacing, and margins. BAD. ASS.

The characters are at the inn or show up shortly. Then the shit starts. The cult leader shows up and wants the artifact back. “Young mean with taloned hands and the heads of antelope will appear as if they had been lurking in the shadows of the common room.” Combat!

That’s it. You get almost nothing more. A brief sentence or two about the inn and the proprietor. (2 sable boys. 9 rooms upstairs. The innkeep lives beside the inn.) A couple of notes about there being a church nearby with a holy silver maul and how to destroy the artifact.

I get it. Some people wing it.

This is one of those products that wounds my inner child and makes me feel ripped off. (Pay What You Want aside.) The setup is wonderful; one of the very best. Nice villain. Nice monsters. AND NOTHING ELSE. This approach to adventure products is antithetical to my foundational beliefs. The purpose of the published adventure is to help the DM run a game in which the players and DM have a good time. The DM has had a shitty day. In ze’s job as an assistant crack whore trainee ze’s had to take shit from their boss all day. The kids are being teens. Traffic sucked. Dinner was cold. And ze needs to run a game for their friends in 90 minutes. They go buy this. Does it help the DM enough? Are their (my) expectations crushed?

In this case, Yes, expectations were crushed. The set up is rock star quality. It’s just missing anything other than “dudes show up and start fighting.”

This needs just a little more. Just a page of single sentence set-ups. They come crashing through the roof. They set the kitchen on fire, or a few NPC’s to toss in to the inn for preamble fun or combat complications. They don’t needs stats. They don’t need to be complicated. Just enough to get the MD’s imagination going for livening things up a bit beyond a straight up “Roll for init!” callout. An unrelated conflict in the inn.

1 Response to They Met In A Tavern