Lost Lair of the Lizard Laird 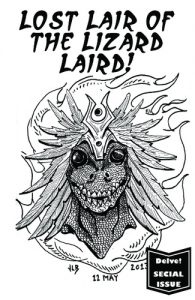 …the tribe is willing to release them and forgive the party’s trespass if they will perform a task on behalf of the tribe. Tsoraz Tsoraz believes that he has found one of the entrances to the upper halls of the great kingdom of Saralan Smasah – the Upper Halls of the Sun and Stars. If the party can recover the Scale Heart, one of the Lizard Laird’s badges of office believed to have been part of the treasury at this site; then the party will have earned the gratitude of the tribe and be free to go. If not, then they may well find themselves invited to dinner – as part of the menu!

This is a forty four room dungeon on a non-linear map with a “ruined halls of the lizard man king” theme. It has a decent mix of encounter types but a very … utilitarian way of describing rooms. The utilitarian description is then expanded upon with mechanics that are a touch too verbose for my tastes. The designer is going someplace and I get where they are going. They just don’t make it too terrible easy to get there. Ruined jungle/swamp temple with vines, a crazed madman alone in the ruins, fungas-bug zombies and a final room with a giant fungus/fly/decay pit in a ruined sun god temple with a towering cracked dome … it’s all there. It’s just presented in such a way that doesn’t make it easy to put it together in your head.

Mechanical bits first this time. And I shall start by being petty: there’s no level designation anywhere I can find. The map, taking up most of a page, is nonlinear … thank god. It’s got a decent mix of twists, turns, hallways, loops, secrets and so on … enough to make a party wary about that hallway they passed up, in the dim torchlight. I like a map that gives the party some place unexplored to flee in to. Some place for monsters to come up from behind them from that offshoot they didn’t explore … the impending sense of dread caused by not knowing. That’s what a good exploration-adventure map should do and that’s what this map allows for. The wanderers are just all vermin, snakes, flies, spiders, ants and the like, and the monsters are all book standard except for a few with a fungus infection that regen a little bit. The treasure descriptions are a step up from the normal, with silver daggers with swan hilts and supple knee-high womens leather boots. (Sharing violation Johnathan!)

Back to those monsters, the ones that regenerate because of the fungus. One of the first rooms has evidence of a fire. There are four ant bodies in the room … thus a hint that the ants may have something special about them and the party may need to burn the bodies. Another early room gives the party a hint about a trap later on. You encounter fungus-zombie vermin a couple of times. This sort of interconnectedness between rooms is something that’s critical for an exploration dungeon and something that is almost always missing the smaller plot/lair type dungeons. They give the party small victories as they learn that their actions DO make a difference. Rather than just say “Fuck it!” and hack something and move on they are rewarded for using their brain-noggins a bit. The dungeon has puzzles and mysteries and things to discover … and that’s fun!

This isn’t a bad adventure … but it’s not particularly exciting or inspiring either. I think sometimes people misread me when I talk about those things. I’m not referring to gonzo, or other weird elements like crystal people or so on. I’m generally looking for a writing style, for the fluff/description part of the room, that makes you want to run the room. I think that’s a writing style which conjures up a picture in your head … without droning on. You want to see descriptive text that your mind latches onto and fills in the rest. “Ruined jungle temple” is some pretty plain text. “Crumbling pillars with vines snaking up them and a low mist hugging the ground” is better … but remember, I’m terrible at this. The text in this adventure is a little too utilitarian for me. “A relief of a stylized grinning lizard face is located in the northeast corner of the room.” is a decent example of text from this adventure … followed by three sentences of mechanics for a poison gas trap. Or “The end of the hall is covered in an ornate relief that depicts the sun with several celes al bodies in varying orbits around it.” or “A life-sized statue of a lizardman holding a large snake over its head dominates the room.” These are all pretty … generic? descriptions. Again, I’m not argue for more text, I’m arguing for DIFFERENT text that is more evocative.

It’s a decent adventure and certainly better than average. If I bought it I would not be bitter that I had been ripped off. It just needs a bit more to push it over the top in to excellence.

1 Response to Lost Lair of the Lizard Laird