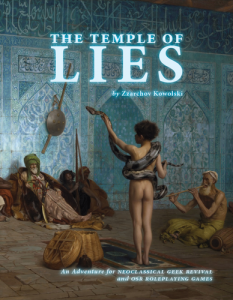 The Temple of Lies is a small light hearted adventure about the typical shennigans one gets into involving human sacrifice and severe opiod addiction.

Black Lotus Peddler: “Two or three years ago it was just another snake cult.”

This two level dungeon, for an urban environment, is an opium den with a cult temple under it. Seven up top and eight rooms underneath form a simple, but not completely linear, map. It’s conversation style assists scanning during play by highlighting with color certain text. The most obvious details. The treasure. Potential hostiles. What we end up with is a nice little gritty urban dungeon that can be used with the cult actually having magic powers or with the cult being charlatans. It’s got a definite Conan vibe going on, with low magic, gritty environments, and communicating the sense of dust and dirt and bareness (in a good way) that the Conan urban scenes did.

Two hook ideas are presented: a loved one is kidnapped and you chase the kidnappers to the opium den, or someone who owes you money, etc, is kidnaped and you chase the to get what you want from the victim. The adventure points out the major issues with any hook for this adventure: you need to want to get the kidnap victim back and there has to be some reason to not go to the town guard. Loved One hooks are completely lame and cause the party to not form any emotional attachments (the downside of murder-hobo’ing, I guess) while the second hook is more interesting. The whole “I don’t give a shit about the dude except for the fact we need something from him” is a nice classic twist.

The rooms are pretty focused on what’s important. If the room is important it’s longer. If it’s less important it’s shorter, maybe just two or three sentences. But even then there’s something to loot/glean. The mud room is a good example. There are 12 cloaks on hooks and 40 shoes & boots. In most adventures this would be the kind of extraneous detail that just clogs it up. In this adventure it’s a clue that there’s something hidden and more people about than just reside in the opium den … ie: we need to find the hidden area with the other people in it.

There’s a good trap example here also. Many adventures have traps. A lot of those traps are seemingly random. This can force the party to slow down play as they go about searching for traps everywhere because the shitty DM & adventure sprang one on them once. Slow play is not fun. In one room there are two massive quartz crystals leaning against each other to form an arch. You have to walk under it to get to the doors on the other side. Also? A tripwire. The players are cued in by something unusual, giving the non-stupid ones a clue to search. Traps done right.

The room styles are very conversational. Very. I’d normally rip something like this apart because of the difficulty of scanning the text during play. Zzarchov instead provides assistance to the DM in the form of color coding. The text for the “Latrine” room takes up about a quarter of a digest sized page. Ug! Gotta read it all quickly at the table to run it! Instead, though, the designer has provided his own highlighting: Three stalls are made of cheap pine. This is generally enough to get the party going We know it’s a latrine, in an opium den, and that it has three stalls made of cheap pine. This gives you enough time to scan the rest or run it from memory. In this case I remember that the middle stall has a scone right over the hole, making using it awkward. And that it’s a tie point for a rope to get into the temple, below. More than enough.

The treasures and magic items are well described, in an appendix, and suitably unique.

It’s a nice little urban adventure. I enjoyed the opium den and the temple level at the very start (crystal arches and rope pit to get in) the most. A writhing masses of snakes in a room, snake nuns, ancient sarcophagus, and the required giant snake. Except this time its in the process of swallowing the kidnap victim.

4 Responses to Temple of Lies