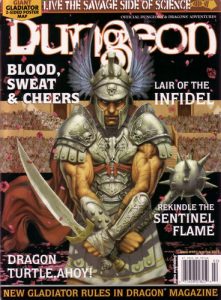 Short “reviews” this time around. I’ve love to do something more in-depth. But that requires Dungeon having something worth the analysis.

Speak of the devil! A decent adventure in this issue!

Side-Trek. Six orcs in a dragon turtle shell boat attack a village. All of the villagers run away. The only good part is a conclusion/follow-up: it’s suggested that the chieftain of the renegade orcs can coerce the party to making him a wig from the hair of a fiendish dire wolf.

Provincial Prior Cause
By Johnny L. Wilson
3e
Level 1

Pseudo-historical adventure linear enough to count as Scene-based rather than Encounter-based, even though it’s numbered like an encounter adventure. This is seriously one of the most basic things I’ve seen outside of RPGA/Adventurers league 90 minute adventures. Land on a beach, go to an empty island hut/hermitage, go in the root cellar

Pandemonium in the Veins
By Frank Brunner
3e
Level 5

Gladiator-based adventure. Here’s some highlights from the summary: “when faced with evidence a contingency spell whisks him away” and “his son, who survives as a ghost possessing a black pudding, harasses the party.”

In spite of that nonsense, this is a pretty decent event-based adventure. It’s divided up into three acts, each with its own set of events and its own “Gather Information” table. This is tied together with a decent overview table. The entire thing is supported with the kind of tidbits that I’m looking for in NPC: something to hang your hat on. Weather it vaulting over tables to support the table or tucking his necklace into his shirt before fighting, the NPC’s here get something to make them distinct from each other, even the ones on the rumor/Gather Info tables. Mixed into all of this are actual gladiator fights. You end up with an adventure in which the party wanders around investigating and questioning folks, having gladiator fights in the arena, and then experiencing some events also. This is a great way to handle an adventure of this type. The party still drives the action and the events are triggers for more to happen, rather than being on a bullshit railroad. It needs help, in particular it needs some reference tables to summarize events, NPC’s, and so on. This is one of those rarest of things: a Dungeon adventure worth your trouble to run … and put effort into running.

Beyond the Light of Reason
By Caine Chandler
3e
Level 13

An adventure that wants to be good and fails. A village will be attacked soon and they need you to go to the mountain next door and relight a lantern they have that wards off evil. It’s got about forty rooms scattered between an upper cave level, a lower cave level, and a ruined temple. The upper/lower caves is trying to do a faction thing with a creature or two you can talk to, but the map layout isn’t exactly conducive to this. And your ally is probably an Aboleth … and I don’t think that monster works EVER. There’s lots and lots and lots of backstory in each of the room descriptions. In one you get the entire recent history of a group of manticores … for no reason at all. It adds nothing. “The manticores are growing weaker through hunger after the frost giants in room U2 killed three of their pride a few days ago. Two more attempted to leave the mountain but were killed by the dragon earlier this morning as she left (their bodies were taken as snacks to eat as she flew)” And that’s the adventure being terse. The temple area just ends up being a rooms after room hack with slaadi and devils. There IS a decent encounter with a disguised chain devil, but for the most part this is just drudgery. The concept of the villagers impending doom is a nice timing effect, but the rooms just stink.