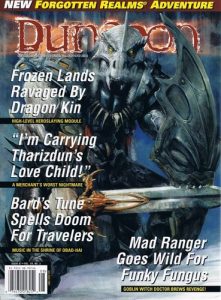 I think this issue had a CD in it? But my second-hand copy does not. 🙁 Nor does it have a cover.

This is a rough one to review. It’s essentially an adventure in two parts: an investigation around a ruined keep and then an assault on a Zhent citadel. The first half is a pretty nice ruined keep, and environs around it. Just about everything you find is related to everything else, with lots of clues and one thing leading to another. This includes the wandering monster table, which is both useful for the overall mystery and in what’s in the ruins. Things to talk to, places to explore, a nice variety of environments, creatures, and types of encounters. Almost a picture perfect example of a nice small build-up area to a main adventure. This then transitions into THE WORST WALL OF TEXT I’VE EVER SEEN. The second half, a Zhent citadel, is nigh incomprehensible because of the wall of text issue. Two sentences, or less of room description gives way to a half page stat block, or more, with other “Requirements” providing lots of words and little usefulness. It does have a nice order of battle for the citadel which is always useful for an inhabited area. Both areas also have decent maps, with lots of ways to get between places that add much needed variety and tactical options. A couple of empty crypts in the ruined keep seem out of place, but one of the hooks is nice: one of the characters relatives was involved in the original siege of the keep and has left you a map. I like this adventure. I like the beginning a lot, especially, but the second half is essentially unusable as written.

The Cradle of Madness
By Rob Lee
3e
Level 6

A mediocre, at best, adventure with few to no redeeming qualities. It’s got a nice column long read-aloud, those are always fun, right? How about making the main enemies cultists who all have a suicide tooth that they use to kill themselves if captured. No? How about death traps everywhere in the dungeon. No, again? I know what’s fun! How about an arch with a high save disintegrate trap! And if you fail you also take a lot of damage! With a high spot check! You know … if only some of those cultists could have been captured,, I bet they could tell us all about those traps! Look, I ain’t got a problem with death traps, especially at high levels, but I do have a thing about stacking the deck against the party. It’s adversarial, and D&D ain’t adversarial. If your DM is adversarial then tell them to Piss Off and go get a new DM. It’s like, at high level, you had a no save death arch and put in a note “any augury/commune/legend lor, etc spells will show the arch to be friendly and giving a boon.” This is just some lame ass shotgun shack evil temple with lame theming, lame opponents, and little connection between the hook/plot (A damien-like Tharizdun pregnancy) and the actual environment.

Eeek! The title art, of a dragonborn, gives me horrible flashback memories of Hoard of the Dragon Queen! Man, Hoard sucked shit. This is a journey to, and then assault on, an ancient white dragons lair. The lead into the lair has about a zillion ice golems. Every time the party turns around there’s an ice golem attack. The journey to the lair is linear, boring, and the encounters mostly disconnected from the actual adventure, except for one or two. (IE: in contrast to the first adventure in this issue which did an excellent job of tying everything together.) “Bob wear a hat of disguise and has an undetectable alignment spell.” Ug. Lazy. The dragon’s lair has a nice entrance thing going on, but the inside just feels like room after room crammed full of high-level monsters. I’m not particularly fond of G2/Jarl, but it has A LOT more character than this place does. Has there ever been a good dragon adventure? There’s the Kramer one, but even that one did a better job on the environs than the lair, IIRC.

Valley of the Snails
By W. Jason Peck
3e
Level 1

You’re implored to go find a guys missing friend, and the signs lead to a valley. He’s deranged, because of some goblins running around the valley and their blowgun poison. It’s long. It’s not very interesting (especially compared to the first adventure in this issue, also a level 1) and it had the stats for a small wood box. Yes, that’s righ, a box … used in a fox trap. ‘Wood. 1” thick. hard=5, hp=10, dc=16’. A hidden valley, hidden ways down, weird things in it … it should be great … but it comes off as boring. Tediously long and boring.

Uh, an ogre and a druid in a 4-room temple. I guess this is the 3e version of a side-trek? It’s too bad this is so simple, it’s got a nice little setup and (possible hook.) The origins of the temple are very folklorish “I’m throwing my hammer in the air, if it don’t fall back I’ll do it!” sort of thing. Related to that it’s written in a … plot-neutral manner that allows it to be slotted into a larger campaign. “When the party needs an oracle/question answered then drop this thing in.” It even can end with the “Saint” reappearing. That’s all nice. The cartoony bad guy and simplicity of things is a turn off though. Find a good temple and slot this hook/background into that.