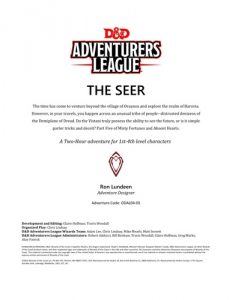 The time has come to venture beyond the village of Oras?nou and explore the realm of Barovia. However, in your travels, you happen across an unusual tribe of people–distrusted denizens of the Demiplane of Dread. Do the Vistani truly possess the ability to see the future, or is it simple parlor tricks and deceit? Part Five of Misty Fortunes and Absent Hearts.

Uh … derp? I don’t get this one AT ALL. It randomly places you in a forest in order to encounter some Vistani. You are then led through three forced combats and two roleplaying encounters. End. I just don’t get it at all. It doesn’t look like it’s connected in any way to anything else going on and is just dropped in the laps of the party. It’s as if someone said “We need a unconnected adventure!” and someone else replied “Well, how about they meet some vistini while wandering in the forest?” and then it went forward.

The idea is that you meet some friendly vistini, they ask you to look into a bridal matter with another family of vistini. That group tells you that the bride ran off with an outcast. You “track her down” (which in this context means just having a forced combat) and then find out she’s a vampire spawn and kill her. Done! There’s just nothing to this adventure. It literally starts with the group wandering through the woods and getting attacked by bears. Then, Vistini group A, Vinstini group B, undead attack, Finale. There’s no real game here, just rolling some combat dice. I guess the bride/marriage/outcast thing could count as depth development … if we ever see any of these people again in another adventure.

I’m not sure what’s going on. It’s like someone said “ok, three fights and a little roleplay.” This adventure is not even trying. This fucking review is short because there’s nothing to review! I think I count 5.5 pages of content? And one of the fights is supposed to be removed if you’ve less than 45 minutes remaining? I guess … yeah? I mean, it was just a railroaded forced combat after all, but …less content?!

Look, I like a terse style, but fuck man, there’s VERY little content here. Two vistini families, or different personalities … is that supposed to be the adventure?

2 Responses to The Seer