DDAL4-1 Suits of the Mists. 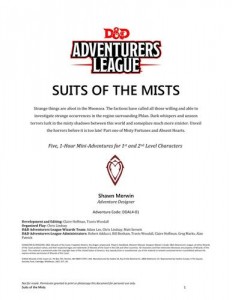 As you can see, I have hoped for the series.

Strange things are afoot in the Moonsea. The factions have called all those willing and able to investigate strange occurrences in the region surrounding Phlan. Dark whispers and unseen terrors lurk in the misty shadows between this world and someplace much more sinister. Unveil the horrors before it is too late! Part one of Misty Fortunes and Absent Hearts.

Five one to two hours that dump the party into Ravenloft at the end. Boring, mechanical, and suffering from the pedantic Adventurers League Overhead tax. Only an adventure if you consider five combats, one in each mini-”adventure” to be an adventure. It’s not. It’s an encounter. And a boring one at that.

Oh god. Six pages of logistics data before the adventure background. The general usefulness of data is suspect … at best. It’s all very simple advice like “read the adventure first” or the minutia of adventurers league mechanics. The seven pages of boilerplate will, I’m sure, show up in every AL adventure this season. Or past seasons. It makes reference to your faction raising you and so on … ignoring the fact that the party is dumped into Ravenloft and no faction support is available. (Ok, I’m supposing this is the case in future adventures. I could be wrong. But I’d guess not.) I wish they would yank all this shit and just put it in the DM’s guide for AL or maybe just cram it into a DM season guide. It just clogs up the thing and takes away from the better bits that are mixed in, the localization bits. There is an overview of the Ravenloft, and the highlight is one of the better parts of the CoS adventure: the cosmetic spell mods. Skeletal phantom steeds, alarm spells with piercing scream, and so on. The other really nice bit of this is in the spellcasting services. Mixed into the pedantic minutia is something interesting: Jeny Greenteeth is the only one available to cast spells for the party “back in town.” She’s a hag you meet. In any event, the adventure notes “This will no doubt lead to some uncomfortable situations and unforeseen consequences.” And Fun! Don’t forget fun! How bad you want that Remove Curse bucko?! Bwa hahahahaha! I love it. This entire thing needs more color and flavor like that and less generalisms.

The major flaw with the adventure is that it’s boring. It’s a boring adventure and it’s written in a boring fashion. There’s no joie de vivre in the thing. And I don’t mean Ravenloft Dread. I mean it’s all generically mechanical. The hook/backstory is two pages long and devoid of life. Nothing specific, just generalities. All abstracted. You get to an inn, the folks are upset. There are four DM bullet points about some stuff the romani, err, sorry, Gur, stole. Asking around gets the DM to give the players a handout. It has generic information about the four “normal” encounters. “A man in his 30’s named Bob was seen in the vicinity of the stables.” Can you see the abstraction here? No color. Just summary information. Pick something off of the list and your journey and follow up will be abstracted also. Until you reach the read-aloud, which triggers the encounter. The ability to role play or be creative is severely constrained here. There’s just very little to work with, either from an environmental standpoint or a “something other than a combat” standpoint.

The two most interesting of the five scenarios are the ones that break away. One is a meeting with the hag. The PC garbage that surrounds her is lame (“What to do if the party objects til killing an elk on moral grounds”) IE: the writer goes FAR out of his way to introduce an evil NPC and then back off to list multiple reason why to not kill her and to convince the party not to kill her. In this case the designer does a poor job of communicating danger to the level1/level2 party. Making her an old woman in a floral dress is fun with a stained him is fun … but it should have been accomplished while simultaneously communicating the danger she poses to the party if they fuck with her. IE: just go on the evil NPC’s fetch quest. (Which is a stupid “hunt” for elk, by which I mean a couple of lame paragraphs on running a combat with elk.) The other interesting scenario is in a fortress filled with evil humanoids. But they are all inside/asleep/down below and what you want is in the relatively unguarded courtyard. Drawbridge, an implied 2 levels (the fortress walls), a cart, rubble, trees, a cage. Making a goofy plan and watching it fall apart is a classic part of D&D and this encounter does that.

The encounters are better when they are more than just a forced combat and offer the party an environment they can breathe in and stretch themselves. And the text is at its best being it’s giving out those nice little flavorful tidbits. “Hush now dearie or I’ll carve out your eyes.” MOAR! More of that! Less pedantic DM advice. Less trying to give advice on every action the party could take. The railroads are lame as well. If the party manages to pick a fight and actually kill the hag then their victory will be taken away from them as she comes back. (At least that’s what’s implied.) That kind of shit needs to fucking stop. If they kill her then she’s dead. And no, they don’t get a replacement for her. No rez for you, you killed the spellcaster dipshits.

The maps are lame. And only the fortress one offers anything useful to the DM. The cave map may be the worst. Literally a small loop on a full page to represent the cave. Wow. That adds so much to the adventure! Each adventure also gets about a three page prologue, with a page of “story awards” and a page of monsters and then the lame ass map.

I heard a rumor that the designers of these AL adventures are now paid, and the speculation was that the quality would be higher. I don’t know what they were like before, but this one stinks. The designer needs to cut words and focus on specific bursts of flavor. “SHOW, don’t tell.” Is common advice … but this seems to reverse that with an almost unerring compulsion to “TELL not show.” Whoever oversaw this (the editors?) needed to go to town with “prune this” and “condense this” comments.

This is $3 at The DM’s Guild. I’d recommend you not buy it, but if you want to play AL then you have to.

Finally, to be petty, the “Suits” thing is never explained. Each adventure is themed for one of the five suits in the Ravenloft tarot, and has a brief section on it, but there’s no explanation of how it all ties together.

3 Responses to DDAL4-1 Suits of the Mists.