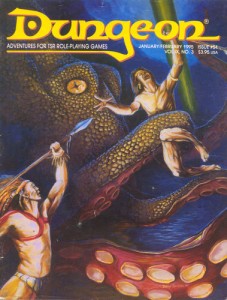 This adventures does what few can: marry a location to events to make it seem “like a living place. Well Done! A haunted room in an inn has teleporters to several other locations. This noted as a solo/5th level adventure or a group adventure for levels 1-2. It’s also an interesting idea that could use expansion. The concept is that there’s this room that weird stuff happens in, which turns out ot be haunted, have a variety of teleportation portal devices in it, and has at least one other thing going to. You “discover” it your first night at the inn, but you could just as easily slip in into a haunted hut, tower, etc, as an adventure locale. I think that’s what this one interesting: you can use it as locale and insert your own McGuffin. The premise is nice, it’s got a nicely described magic item, the command words to the various objects make sense and discoverable with a little work in town, it’s got some nicely developed NPC’s and at least one very good “scene” that’s not a railroad. It’s also wordy and presents information awkwardly sometimes, like when it’s describing the various rumors and NPC’s you can meet. But the core here is good. Teleportation from a normal room is a nice fantastic trope (Lion, Witches, and Wardrobes anyone?) and it’s done well here, like one inside a sea chest with a rope ladder in the inside top. Why’s there’ a rope ladder in the inside top? Well …. There’s also a very nice scene with some classic headhunters doing a ritual, and giant octopus rsing holding them in tentacles, etc. A little buff on the baddies and/or quantity changes could make this useable all the way to levels 3-4 or 4-5, I’d guess. The rumors & NPC’s are in paragraph form, which makes it awkward during play and in picking out information. I’d also like a little more “salty flavor” in my Sailor Jerry’s inn rumors, but at least you get some nice NPC’s to go along with them. Also, a very nice scene in an evil temple, complete with supplicating worshippers, etc, captured in media res. All Dungeon adventures seem to need work. With work this one could be VERY high on the top tier..

This side-trek to a dragon graveyard is generic and lame but for two details. Someone in Fort Thunder tells you about an elephant graveyard that is three days away. (Seriously? The region is THAT unexplored?) The journey is not provided, but the graveyard/volcano caldera is guarded by a stone golem at the entrance rift. What’s interesting is the footprints the golem “stands at rest” in will perform a stone to flesh if you stand in them. That’s a nice detail. The actual dragon graveyard is boring and no well described or imaginative at all. There IS, however, a dying white dragon desperate for more life that is willing to bargain with the party. I love adventures where you can talk to monsters and make bargains. The dragon here is presented as dying in a day, or maybe just a few hours, and the bar for healing it is quite high. Lowering the bar or somehow buying more time would be a nice adventure hook. Also the adventure notes that he dragon might keep its side of the deal. This is a momentous day folks: this is the first time I can recall Dungeon magazine allowing an evil monster to not just be a total dick and renege. This location/dragon could serve as a nice sage location: you need some info the dragon has, it bargains for more life, etc. You now have everything you need for that; the DUngeon adventure will provide no more useful information or ideas.

This is a dragon hunt sandbox that reminds me more than a little of 100 Bushels of Rye, and excellent Harn adventure. As these go, it’s not terrible. The hook is probably the worst part: a bard hires you to track down and study a new type of Dragon “Guerrillas in the Mist” style. There are some villages to start in, villagers/farmers/refugees to question, and an outdoor expanse to explore, with a halfway decent events/wandering table. There’s a strong “Don’t kill the dragon” thing going on, and a magic item that allows you to reset time for that video game “checkpoint” vibe. The magic item is very nicely described and themed, if a bit powerful and gimmicky for the adventure. The wandering table has a nice mix of rumors from people, helpful ranger allies that are not TOO helpful, and random dragon stuff, like sightings, scales, claw marks, etc. The dragon gets some “you can talk to it” treatment, as well as some options for it living in “harmony” with the locals … or at least as close as you can get with a greedy evil dragon. There are some nice complications thrown in with an asshole guide, crooked guides, a vengeful villager, and a few other things like that. Nice sandbox layout with good supporting complications. The usual wordiness, and the “mining camp” needs some more life to it. It could also use some more … interactions? The dragon “actions” table is a little light, as is the wandering table, for the amount of time the party may spend wandering. If you can make the hook more interesting/plausible then this would be a decent adventure to steal.

There are rumors of a witch living in a mountain cave, but it’s actually a three room harpy lair. There are two invisible traps, one of which provides a warning: “you hear the faint sounds of tinkling” that can be used by smart players to investigate safely. I like traps with this sort of warning mechanism. The second is just an invisible spiderweb. Webs are classic, but the invisible part feels like a gimp. The harpy also has just exactly the magic items she needs, from a sleep spell protection amulet to a couple of rings of animal friendship and the like. This smacks of “providing explanations why there is an invisible spiderweb in the lair” … which is lame. Just. Do. It. The mundane treasure is well described, which I greatly appreciate; for example a thick gold chain with a dragon head pendant and with pearl eyes. Not a lot of extra words but it does wonders for enhancing play. The rumor table tries hard but suffer from META. “A witch who uses air spells lives up there” or “a bard from a far away land.” This should instead be things like “A witch who throws tornadoes at you and whose gaze causes the wind to gust!” or “Princes Arda from the Lands of Musfta.” Must more interesting. Still, the core of “witch on a mountain”,” rumors”, and “windchime & spiderweb trap” are classics, and I LUV the classics.

A “Tuckers Kobolds” adventure. AKA: Killer Kobolds. Something is attacking caravans in the woods and there are conflicting descriptions of what it is … because no one wants to admit they were defeated by kobolds. The party encounters an ambush by the killer kobolds, tracks them through a trap-filled forest, and then enters their lair for a pitched battle. I’m torn on this. I like using the kobolds to maximum effect but the entire adventure smacks of rules-lawyering. “They get a -2 because of close combat” or “+4 because of the dark” or “-2 because of the cave height.” IE: the kobolds are given some fighter levels and “feats” and then every modifier in 2E is used to give the kobolds the advantage. It takes a page and a quarter to describe the 7 kobolds … with quote a lot of repetition of their abilities, all fully described. “Usability” may have been misunderstood … The kobolds are given personalities, which is interesting and a waste because they are just going to be hacked down and/or run away. There’s an optional NPC in the forest which does have a personality that comes in to play. A potential guide with several anger control issues. It does the “attack for one round and then stop” thing, which I can’t stand, but the concept of the NPC is a good one: a troubled creature with anger management issues who flies off recklessly at times. It’s written quite effectively: terse & evocative. There’s also a nice “Warning” in a description … a bird cawing right before the ambush is actually a kobold warning. Hidden things, like traps and ambushes, should get a warning thrown in with the flavor text. Inquisitive PC’s are then rewarded when they follow up with “What kind of bird?” or “What killed the guy by the door?” There are a couple of PC gimps in the adventure, the worst being a portcullis. “Hold Portal won’t keep it from dropping.” That’s lame; it discourages creative play. There’s some throw-away line in a LotFP adventure about how a body will stay dead if “Bless’ is cast. That’s in addition to the mechanical bonus. As the DM, never let the text of the rules inhibit creative and imaginative play. Finally, the rumors are presented as a little read-aloud scene. I like where they are going but dislike the monologue scene. Rather than large chunks of read-aloud for each rumor it would have been better to have a short bullet-list with a sentence or two of flavor. “Ol, Marty, that dwarf cobbler, sez they ‘er trolls. Smelt them they did since it was dark so’s he couldn’t see them.” Done. Next!

Utter and complete piece of shit. This, gentle readers, is the adventure that signals the End Times. This is it. 1995. The year RPG’s died. Previously Dungeon adventures had just been wordy and poorly written attempts at translating the designer’s vision to the purchaser. This one though … this one represents The Beginning Of The End. This is a fourteen page movie.

The characters, guarding a caravan, are caught in a sandstorm. Unknown to them, they are trapped beneath the sands and are slowly suffocating. Their spirits have entered The Borderlands between life and death. Travelling through the desert (they still don’t know they are dead) they encounter several strange things. They then find an oasis. The Last Oasis between life and death. There they meet the guardians and then five events happen on their way “back” to the crossover point between life and death, to return to their bodies. There is no meaningful choice. It assumes you kill the ghul you meet. It assumes you can’t keep up with people you meet. (It’s D&D. the players ALWAYS do something else.) It’s just a movie. No choice before the Oasis. In the Oasis the events start. No choice after the Oasis. The encounters after the oasis are represented as Events but they are actually Scenes. Events imply you have a choice. Scenes imply you do not. You. Do. Not. The movie keeps moving as planned.Do whatever. It doesn’t matter.