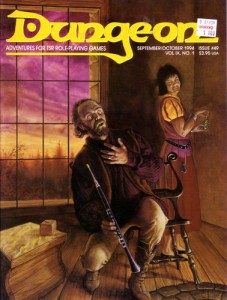 A cover painting of a poisoned flute? Oh, this should be gooooood …

A Predator-clone so clone-like that it suggests you watch the movie! I kind of enjoyed the backstory, for once. It could have been cut WAY down, but a demon that stops fearing the townfolk and attacks day & night, picking them off, paints a nice image. It is,of course, completely irrelevant to any actual play, but any port in a storm. Anyway … while reprovirioning a ship there’s an abandoned town run across and a demon playing Predator with hit & run attacks. The party finds a missing sailor, who, while a COMPLETE coward, tried to convince the party to be brave and save the first mate or the ship’s captain will be mad at them. The juxtaposition between the sailors words and actions seem lost on the man. The hit and run attacks then start. In another stunning example of middle-class morality, you get more XP for letting an undead possess you and less-than-book-value if you kill it. Lovely. Finally, the backstory is told through a found journal entry. Here’s a tip: if you have to tell your story through a journal/diary/etc, then you haven’t done a good job with the adventure and need to edit it again.

I really want to bitch about one thing though: the purpose of the adventure vs the content provided. THINK. What is the purpose of your adventure? Your content should match that. In both this adventure and in another recent Dungeon one (the middle-eastern one with the guy coming out of the paint and killing people) this problem is quite noticeable. In both the room descriptions are presented as “normal.” IE: too much text telling you irrelevant things; aka the style of the time. Instead the text should be used to … support the adventure! Stunning thought, I know. In this adventure the demon is supposed to be doing hit & runs on the party. The text for the rooms should be supporting that. Instead of giving us a long paragraphs on describing a well in the parade grounds it should instead be loading us up with ideas. It hides in the well, ready to yank someone in looking over the edge, and things like that. This one tip would save a billion trees and immeasurably improve almost every adventure ever published. Figure out what your adventure is supposed to be doing and use the text to support it. Really THINK.

Jesus Fuck, two and half pages of backstory for four pages of adventure! That must be a new Dungeon record. Leprechaun steals from party to lure them to a locale and trick them into killing some mudmen that have his pot of gold. Annoying fey (“Oh boy! Kender!” has never been uttered, ever, in the history of RPG’s) and DM fiat combine to provide a frustrating experience for the players. I love fey. The backstory here is not bad, especially if shortened to two paragraphs. This isn’t a fey adventure though; it’s more DM torture porn. Adversarial with none of the heart and soul of a fey adventure.

Two full columns of read-aloud start us off on the right foot. The party is hired to investigate some missing ships/suspected pirates. It leads to a battle on a ship at dock, a brief sea journey, and a small eight-ish room cave complex; the pirate HQ. The port town descriptions are a bit above average, but don’t really impact the adventure very much. Generic port town or the port town this adventure takes place in? Decision time, authors! The town portion does have a bit of a sandbox feel, and it quite open ended in the solutions available to solve the town portion. That’s very nice. Perhaps frustrating for less creative parties, and thus some DM advice could have sprinkled in. Town leads to caves adventure in the pirate base, and most likely a big battle and some chasing through the caves. The cave maps are above average, and can provide a good non-linear environment for this sort of thing. Overall, not bad. It lacks colour, but most things do.

This is one of those “you are the subject of a monster summoning spell” adventures. One PC keeps getting sucked back in by a certain wizard, compelled to obey. A little of this goes a long way, and it’s hard to work the rest of the party in. As a running gag it could be good, with the PC trying to ferret out where/who the wizard is so they can encourage them to stop. But again, a little goes a long way in the “compelled/annoyed” category. See Also: Leprechaun adventure.

Some people love this one but I don’t get it. The party is forced into helping an elf maiden, finds a wizards tower, hits a town, goes up a mountain, and then explores a small castle. There is nothing remarkable about this adventure. Well, ok, no. It does recommend some musical pieces to accompany some of the scenes. Evidently, it was an experiment. Some artist was complaining that words came first and then the art. Why not the other way around? Art, then the adventure text!

Layers and layers of text pound you into submission. The setup/hook is a total railroad job where a group of 15th level adventurers are expected to be caught with their pants down. You’re forced to trust the NPC … it goes on and on. One of the worst hooks I’ve ever seen. At least “caravan guard” doesn’t insult our intelligence. The main villain is a 15th level bard … who defrauds people 50gp at a time. Uh … The castle was magically built for a different bard, a blind one. It features intelligent flesh golem butlers who lie down to rest, magic kitchens, and gelatinous cube garbage disposals. Reams of text. No charm. Nothing interesting. I suspect not even a challenge for four 15th level party members. Gee, hmmm, a sucky high-level adventure. That’s a new one.

There’s a Demotivator that goes “Mistakes – Perhaps the purpose of your life is to serve as a warning to others.”