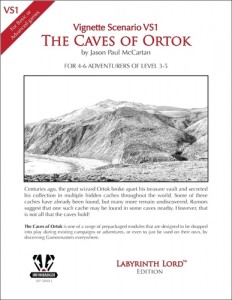 Centuries ago, the great wizard Ortok broke apart his treasure vault and secreted his collection in multiple hidden caches throughout the world. Some of these caches have already been found, but many more remain undiscovered. Rumors suggest that one such cache may be found in some caves nearby. However, that is not all that the caves hold!

This is a short nine room adventure through a cave & dungeon, with the front half being combat heavy and the back half puzzle focused. A sub-par effort in producing an adventure that, explicitly, wants to support the DM during actual play at the table. The “support” seems more like filler, and the actual parts of the adventure that need the designers help are missing. Sometimes, explicitly so. Combined with unremarkable ideas, lots of text, and an uninspiring premise, this is just more fodder for the great morass of “buy 1 get 3 free” vendors at the cons. Content is King … and this has little to none. If I were mincing words I would say that the designer is very unsuccessful in communicating their vision.

The adventure is wordy. Ignoring that, it’s also aggressively generic. Almost none of the descriptions amount to more than “There’s 2 Sahuagin in the room.” Take the rumors: “Pearls can be found washed up on the beach.” or “Many people explore the caves and never come back.” First, these are generic. They are fact based. They communicate no life and no soul to the DM. Second, they don’t really add anything to the adventure. Compare this to Blackeswell. There the rumors guided the party to adventure. But here they are simple facts only very tangentially related to the adventure. Yes, they communicate about the beach and the caves, sometimes. But they don’t do it in a way that adds anything to the adventure, either for the players (“we should follow up on this!”) or the DM (”Oh Boy! Now I can X, Y, and Z!”.) There’s a partially submerged stairway. It’s described as a crude steep and slippery stairway. That’s boring. Dollars to doughnuts the designer had some very strong idea of how this looks in their head. I’m guessing it was exciting. But the language used to describe comes out cheap and uninspiring. The purpose of those room descriptions should be to immediately and solidly build a strong visual image in the DM’s head. The DM’s imagination will fill in the rest once they have an inspired solid foundation. This lays a generic foundation.

Moving on, the product claims to want to support the DM. There are pre-gens. Yeah! They don’t have HP, or spell slots. (Because they are written for third THROUGH fifth level ..) And then there’s the main treasure. The mighty artifacts that Ortok is rumored to have hidden. The goal for the entire adventure. “Gamemasters are encouraged to enter their own treasure here.” There’s a little treasure, like “3d1000 in mixed coins” or “Dagger +1 with a Special Property.” AGGRESSIVELY generic.

Finally, I want to note that there are some puzzles in this adventure. Three if I recall correctly. The adventure makes the fatal mistake, like so many others, of not providing clues. Instead the players must use trial & error to discover that A) deadly stuff ahead, and B) puzzle solution. This is the worst kind of puzzle. It doesn’t support play. People get bored, give up, mess with their phones. Good traps/puzzles foreshadow themselves with clues ahead of time. Both that they exist (“Gee, why is that body chopped in half?”) and in a general line of inquiry for their solution. (“Remember all those murals of Ortok paying a harp?!”) Otherwise they are random. There may be place for that at higher levels, with Augury, etc, but not at low levels.

Ortok, Ortok, See what you have done. You may be dead but the module-people said “Let’s make Another One!”

1 Response to The Caves of Ortok