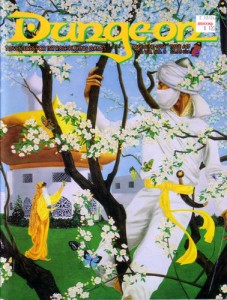 This is, essentially, a set piece battle in darkness. The party stumble on village whose manor lord has just been killed. Looking in to the manor discovers a few clues to what’s to come, and then it’s off to a four room cave in the basement filled with Dark Creepers and a Stalker. This is the darkness set piece. A little role-play in the village, a little investigation in the manor, and then a rough fight in the darkness with 1 HD monsters. It’s an inoffensive little adventure. I think I’m predisposed to like these sorts of “one notable encounter” adventures, but dropping it in as a diversion seems simple enough. Also: there’s an odious section where the party meet some people who fight with the flats of their blades. IE: a designer who can’t stomach the consequences of what they’ve written.

Retaking a wizards tower from an NPC party. The NPC’s have personalities, and there’s a roleplaying element possible with them. The wizards tower tends to RenFaire wizard rather than gonzo sorcerer. There’s quite a bit of detail, and while I can quibble with the boxed text the content of the rooms are at least passable. The NPC locations vary throughout the day and they have a plan for invasion. There’s a little too much exposition of the tower, especially when you consider the core is the running battle/stealth from the NPC party. IE: this is keyed and described like a typical location and yet the emphasis is not on exploring a location but rather taking it back from the NPC’s. That’s where the emphasis of the text should be, with only the best of the wizards tower details remaining, after a good strong edit.

Who likes seeing alignment used as a bludgeon! You do? Great! Better not ignore the NPC Wemics plea for help when he asks in this Side-Trek! There’s a puzzle element, in stopping the fire, a combat element when you discover a fire elemental, and a roll-your-eyes element as the adventure implores the party to recognize the destruction the fire has caused and the need for a create & food water to keep the little animals and Wemics fed.

This is the poster-child for 2E Dungeon adventures … the good and the bad. The hook for this reads like a Paranoia adventure, replete with experimental devices that may work the way you want. Four pages of hook/introduction, the tinker gnome subculture, each gnome fully realized with personality and backstory, backstory upon backstory. A brief overland with a fully described wandering monster table. All ending in a small 12-ish room bandit cave that takes many many pages to describe. Full detail. Rich environments. Interesting trivia. EVERYTHING spelled out for the DM in detail. All ending with a gnome in an Apparatus of Kwalish. The detail is a mix of trivia and gameable content, but the content tends to be over explained hand-holding. The kitchen table and it’s stools are described, including one slightly higher for a gnome to sit on. WTF is that? Trivia. If you arrive before or after an ambush you get some DM guidelines. If you arrive at the exact moment you get a wall of read-aloud text. Many of the bandits get A LOT of backstory. You can probably run this, with some furious note taking ahead of time. You will probably have fun. It’s unclear though that the effort will be worth it. I like the ‘quiet’ nature of the adventure, the monsters who may parlay … Again, it’s just not clear to me that there’s something of substance here. Like I said, good & bad … This could also be a hidden gem of your game, if you put the work in to it. No thunder, just little works for 1st level adventurers. Kind of the opposite of a DCC adventure; still involved, but not in a gonzo way.

The Assassin Within
by Paul F. Culotta
Al-Qadim
Levels 3-5

This is a sad, sad adventure. You’re supposed to be guarding a university professor from an assassin that is targeting his family. It’s marred by glaring issues. Way WAY too much backstory on motivations of everyone involved (justifying what’s going on in the adventure.) Forcing the party to do what the designer wants them to do. (There can be no appeal to the authorities, the university colleagues, or anyone else.) The usual “the enemy has exactly what they need to forsee every situation the party comes up with so the way I want to adventure to proceed can’t be messed with.” And, worst of all, no real Al-Quadim flavor except for mindless trappings like changing the names of the currency, etc. Finally, the adventure lacks focus. The focus is supposed to be on the cat & mouse game the assassin plays. But then the adventure, it’s descriptions and locations, are not focused on that. It’s all over the place, describing this and that, bits thrown in here and there. Know what the purpose of your adventure is and focus your writing/descriptions on that.