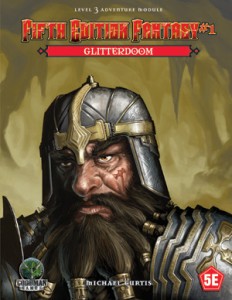 Centuries ago, the glitterdoom came to the dwarves of Steelhand Clan! This divine curse transformed the dwarves into hellish forms with an insatiable greed for gold. Now, a chance encounter breaks open long-sealed gates to unleash the glitterdoom again. Can your adventurers delve into the forgotten halls to confront the subterranean menace?

This is an unremarkable adventure, fairly typical of the printer adventure module market. The formula is a simple branching map, a simple storyline, and a couple of goodies: spells, races, feats, etc. It’s serviceable as long as you’re not looking for anything interesting. Recall that demotivator poster: Perhaps the Purpose of Your Life is to Serve as an Example to Others? Let’s do that here. I noticed one MASSIVE missed opportunity, that I’m going to discuss at length, and one more one, that I will discuss first.

First, let’s get the boilerplate out of the way. Too much backstory reveals a dwarfhold overcome by greed, an ensuing curse, and the hold lost to time. Random dwarf dude hires the party to help him search it for clues to a DIFFERENT lost dwarhold. All he knows is that there are undead inside. Ok, done.

Point Of Interest Number The First: Rewarding Players.
At one point in the adventure the party stumble over a trapped hallway. The ceiling of the hallway has collapsed and it’s evident that there are a number of skeletons underneath … one bony hand stinking out of the rubble. If the party take the time to search then they find nothing. This. Is. Lame If your group dives to the bottom of the upside-down waterfall, then there should be a treasure. If they go out of their way to swim the underground river then there should be a treasure. If they climb to the top, or bottom, of a gorge/chasm then there should be a treasure. If they dig out the bodies of a bunch of dwarves so overcome by greed that they were cursed … then there should be a treasure. When should there not be a treasure? Sitting on the middle of table in an empty room that you have to pass through. The idea here is that the common, the mundane, the easy have all been snapped up. A thinking party, going out of their way, should be rewarded for thinking. That ENCOURAGES them to think. Stonesky Delve did this. A couple of DCC adventures have done this. (I’m thinking specifically of the one with the island under the castle, and there’s a flowstone formation going up, with a treasure at the top if you follow it.) Frequently there will be a magic sword, etc, at the bottom of a chasm in the dungeon … usually with a beastie nearby. If your adventure has someplace weird/hard to get to/hard to explore in it, or that’s non-obvious, then put in a treasure. A clever party, searching the rubble and finding nothing, will give up on being clever because it’s not worth it. This was perfect opportunity to put some gold in the skeletal stomachs of the dead bodies, or in their mouths … so overcome with gold fever they ate it to protect THEIR gold from the other dwarves! Freaky! Helps tell the story of the place! Rewards level/inquisitive players! But instead … the adventure has nothing to be found under the rubble and I get to say that this is more similar to 3E shovel-ware. Not-terrible shovel-ware, but, still …

The Core Issue: Suspension of Disbelief/Theming.
I don’t know what to call this. I’m a plebe from a public school so I’m going to compare it to the suspension of disbelief issue in Science Fiction literature. Basically, you can get anyway with any major deviation form now, but the rest of the story must flow from that new fact. I might back comparisons to theming. If you are writing a horror book it PROBABALLY shouldn’t be full of AHNOLD-style action. Your theming should be consistent. That’s not the case here.

I’m going to focus in on one line in the adventure. Just one. It may be the best idea, by far, presented int he adventure. At one point the party is inside a giant mining bucket, using a winch inside to descend in to the darkness. Then they hear a number of ominous whispering voices saying “Come down and play with us.” Holy Fucking Shit! Are you kidding me? If I was faced with that my PC would shit their pants and I’d start winching the thing back up, regardless of the feelings of the others. That’s a GREAT line. That line could have set the tone for the ENTIRE adventure. Imagine the entire thing … you’d have something like The Inn of Lost Heroes, one of the best published adventures. Instead, nothing else in the adventure is consistent with that line. It’s a generic monster slugfest. Enter room. Kill monster. Next room. It doesn’t matter that the main enemy is undead dwarves. They are just treated like Yet Another Thing to Kill. They get treated a bit like zombies, who can move through rock like ghosts, and who can drain stamina like a shit-your-pants stat-draining undead of old. Instead, they get boring old descriptions and are treated like a orc who can move through rock walls. Joy. At one point they fire at the party with their crossbows through a portcullis. Uh … Undead using crossbows? Not quite the cold murderous rage of the intelligent undead or the mindless death-dealing of the skeleton/zombie class. There’s nothing SCARY about them. There’s nothing scary about the environment. What’s that Dragonsfoot series? Where the Fallen Jarls Sleep? That series had good undead. (and devils, for that matter.) It gave great advice for making the undead scary and real.

Look, I’m not saying Curtis should have written a horror adventure. What I AM saying is that he’s got a TERRIFIC line in this adventure. On a second draft I wish he would have recognized that line and gone back and started over, building off of that line. Consistent theming. Building tension. Freaking the fucking players out and making them really, really REALLY want to find a vault full of gold in order to continue on with the horror. Not unfair combat. Not overpowered monsters. Fear. Dread. Apprehension. Fear of the Unknown. Just exactly what IS in the black hole in ground? Treasure, for sure, we know that. But at what cost?

Instead, a generic hack.

I got some backlog to review with DCC & 5E, and then on to the more recent OSR adventures.