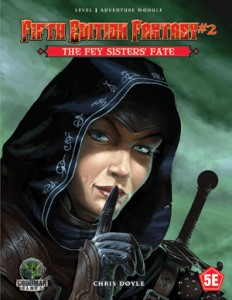 The cries of battle echo in the rustic wilderness, as a pair of fey sisters defend the ancient Briarwood against invaders. When the town of Bur Hollow sends militia men to support their fey allies, they disappear without a trace. The adventurers must enter the Briarwood and save them!

Chris Doyle, the designer, shows a shred of promise. There are some very bright parts to this adventure. Unfortunately, they are the window dressing, and the core remains mundane. It is, however, more than you usually see in an adventure. If this were his first adventure that he’s written I’d say he showing some serious promise but needs an editor and needs to jump in with both feet. It’s his 25th-ish adventure though, and I’ve not seen the other 24 so … . This is one of the most conflicted reviews I’ve written in the last seven months.

This is a simple linear journey up river and through several set pieces until you defeat the bullywugs … err.. frog folk. The adventure quite verbose, perhaps because it was one of the first 5E products. It’s also pretty simple, being a linear track. It has some good monster and treasure descriptions, which, at least seven months ago, tended to be few and far between in published adventures. There’s some morality embedded in the adventure which I always hate to see but is easily enough ignored. There is at least one encounter worth stealing.

There’s a page of so of backstory here which details how two dryads have been harassed by some bullwugs, and how they’ve responded by manipulating goblins and townsfolk. The end-all is that the town send you to find some missing guardsmen, which leads you to a dryad and another “quest”, which leads to the captured guards and another “quest”. You fight a bunch of bullywugs. It’s all quite linear. Go to A, then B, then C. The writer acknowledges that. I’m not sure that makes it ok, but they do at least tell you that they didn’t try when writing it.

The adventure proper … is …. I don’t know. Not good … with a single exception. Linear. There are only a few forced fights in it and they tend to be at the beginning and end. Most of the rest of the encounters can be approached with creative thinking. IE: it’s still linear and you’re still going to have to face the encounter, but it’s not that 4E nonsense of REQUIRING you to fight. Instead you could sneak around or light some fire or let loose your bag of possums or whatever. Two of the big encounters are on multi-level platforms in a tree and along/around a crude beaver-type dam. They are not very good. I get that the writer is TRYING to set up an interesting environment, but I don’t think it works. An interesting environment must communicate a picture to the DM. It’s hard to be specific here. The DM must grasp the environment well enough in their mind that when the players say “is there a chandelier I can swing on?” that the DM can Yes, even if the text doesn’t say there’s a chandelier. You must have enough of a picture to have the ogre grab a muddy decayed tree root from th beaver dam to throw at the players. No encounter description can ever provide the degree of detail needed to support this type of play. What it CAN do though is paint a picture of a scene that the DM’s mind fills in. Sound murky? I didn’t say it was easy. This adventure, and most adventures, generally fail in this area. They don’t inspire.

But Generally Fail doesn’t mean Complete Fail. This adventure hits one VERY high spot and almost succeeds in another place. There’s an earthen “dungeon” of a few rooms under a tree. Mostly it’s mechanical text. Thrown in the middle is some description of tree roots hanging down. That INSTANTLY brings to mind the witch scene in The 13th Warrior. Perfect! I grasp the whole thing instantly and can fill in as needed. In the by-far-the-best-encounter, the writer not only creates an interesting encounter but he also manages to paint the picture. I’m going to try, but I’ll fail: There’s a pretty, short, naked girl on a rock in the middle of a small drying pond. The landscape is full of dried up marsh type stuff; almost no water of any size to speak of, but enough mud, dried & wet, to make life a pain for the party. The nymph has crossed dry land from a nearby drying-up pool and is exhausted form the trip. Eventually she tells the party her sisters are there and need help; they can’t make the journey and there’s a mean bear trying to eat them and their pool is drying up, etc. The writer, unlike me, paints a good picture of environment. The encounter is a good one: not a straight up fight, magical creatures who are not being straight-up dicks, and a PROBLEM to solve. Sure, you can beat on the bear, but you could also lure it away, etc. The nymph at the other pool need some help. The lone one gets a name, but the other five don’t get names or personalities, and should have. Just something like “Marydale; flirty. Lillysun; bold”, etc, would have helped a lot. There’s always a nit to pick, but this encounter is GOOD, and worth stealing. More writers need to do more things like this. Brave Little Tailor, HO!!!!!!

The monster descriptions have some nice bright spots. The mosquitoes have delicate gossamer wings twice their body size, and black coloring with a foot long proboscis and a pair of bulbous multi-facated eyes. The dryad looks like a delicate elf maiden with brown-red hair, and ashen skin etched with wrinkles, with dress covering the curves of her body. There are a couple of other examples. These are pretty good. I’m always looking for a decent monster description. Not just “its a goblin”, but rather a description of the goblin. It’s doesn’t have to be long, as these examples illustrate, but they do need to have some adjectives & adverbs in there. You can see that in a curvy body or gossamer wings or multi-facated eyes. It may sound hokey, but just a little of this can go a LONG way to cementing a kind of platonic ideal of the creator in the DM’s head. Then the DM can take it from there. To be sure, some of the descriptions suck, like the ogre description which is quite bland. And other creatures don’t have a description and could use one. For example, there’s a bear with no description. But it’s clear from the text he’s wounded. A flap of raw skin exposed, or his skeleton showing through his leg, or a stinking gangrenous wound would go a LONG way to helping out. I would note that I misread the Bullywug … errr.. Frog Folk Taskmaster entry and thought that he could remove his tongue and use it as a whip. That would be pretty cool! Who wouldn’t want to use a giant bullywug tongue in combat!

Similarly, the treasure descriptions tend to be above average. There’s an ivory box decorated with a coiled dragon, housing an electrum hourglass filled with powered emerald sand. Who the fuck in their right mind wouldn’t want THAT hourglass for the inn back home? This is SOOOO much better than “trease parcel worth 250gp” and it requires almost no more effort. It fires the imagination. It leads to questions. It inspires. It treats you as if you are playing a game of imagination and wonder, instead of yet-another-resource-collection-game-“you find 4 yellow cubes that you can spend with your 6 red cubes to make a black cube that give you +1 on attack …” The magic items have that little bit extra also. Parmalae is a magic rapier. Thin & delicate, gilded in pure silver, when you swing it blue runes appear on the flat, with an electrum hilt in the shape in the design of ivy. Once per day, on a hit, the target can be gilded by a glittery fey lining. THAT’s a fucking magic item! It SCREAMS fey origin. What’s it’s history?! Who Knows?!? Who gives a shit it’s a +1 weapon, that’s the kind of magic item someone will keep LONG after they find a boring old +2. (And if your group has someone who would keep the +2 then you kick the asshat out of our group. Why play with the soulless?) There are other examples as well.

The writing style is verbose and it’s readability is further marred by by an overly large font and the use of italics for large blocks of read-aloud text. All of these, together, make the adventure difficult to read. Guy Fullerton wrote an entire series on adventure layout. If you’re an amateur, go read it. If you’re a professional, go hire James Kramer. I hate bitching about this kind of stuff. It seems petty. It’s not content. It’s gotta be pretty bad before I complain, and I’m complaining here. Readability is pretty poor.

Finally, the writer embeds morality in to the adventure. Fuck. You. Chris. Doyle. If you fight to subdue some dazed guardsmen you get an XP bonus. If you turn down a reward you get an XP bonus. Don’t tell me how to play/run D&D. That shit belongs in a DMG, not an adventure, under “alternate/sucky-ass play styles.”

Is this thing worth $10? I don’t know. How much is a gallon of milk in 2015? $10 is 2 beers, or also, less than the cost of one top-shelf/mixology drink. Its it worth that much? Yeah, I think it is. Would I run it? Hmmm, no. I have impossible high standards. You might like it though, especially is you think most published adventures are ok.

4 Responses to The Fey Sisters Fate