FT1 – Creeping Beauties of the Woods 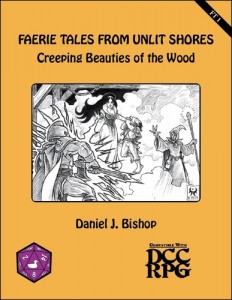 The faerie tales of old have been conveniently ‘cleaned up’ from the days of old, when witches were considerably less beautiful, and being woken from a death-like sleep by Love’s First Kiss usually resulted in- more death. Big Bad Wolves, Tin Woodsmen, animated trees, Talking Animals- all just a little more creepy that we remember as children. But the rewards are great, as well… marrying the princess, gaining the throne, and gold and wealth, too! Explore the macabre wares of the Goblin Market, the Grave of the Sorcerer, the Elf Mound, and many more fascinating phenomena from anceint faerie tales. But don’t leave the path…

The party is encouraged by the Baron to scout out the Grimmswood forest and look for the dead Prince Charming’s three re-animated brides: Ella, Beauty and Snow. Since the previous adventure, FT0, they’ve been running amok killing everyone in the forest and thinks are getting harsh because of the lack of trade. Your reward for this, for once, is something actually good: the hand in marriage of the princess. Yes! No longer under the threat of death! No longer “or else!” An actual reward befitting of an adventure! Fairy Tales to the rescue! Hooks are a hard thing to write. The best ones motivate the players instead of the characters, making them WANT to send their characters in to peril. The hook here is good, which is why it’s a classic. It could have perhaps used a couple of more words about the princess in question, to be married off, but otherwise it’s fab. Short, sweet, to the point, motivates, and the Baron is direct without being an asshole. Achievement Unlocked – Hook!

The heart of the adventure is a little hex-crawly thing through the forest, most of it on trails. There are 16 or so encounters, with a couple of them being small location with six to eight locations, like a small cave, mine, or inn. Of these three are the main encounter locations, the locations of the three brides, and three are ‘on the way.’ The others are on small side-trail or out of the way locations. I’m not sure how I feel about this. If you stay on the road you complete the adventure with only 1 “side trek” encounter. There’s a LOT of good content in this adventure that will never be encountered if that happens. It’s not so much that “ZOMG! The players won’t get to see the cool stuff!” but rather the core encounters, the three with the brides, are so … easy? To get to. An analogy may be: in a dungeon with 100 rooms the two main encounters are the two rooms directly to the left of the entrance. Uh … ok. No, I don’t have a good suggestion in fixing it, other than moving them about on map.

The encounters in this are GREAT, across the board. The wandering monsters are all very interesting, with just enough fairy tale influence to be evocative but not so much to be kitsch or tired. Animated apple tress, “old style” jerky ethereal elves, and the like. The designer has done a great job of taking fairy tale elements and themes and twisting them just a bit to keep them fresh. This extends to the actual encounters. From a goblin fair to ancient barrow to a behemoth of necrotic flesh, it all recall an earlier, non-Tolkein, view of fantasy. They show an understanding of the source material AND of fantasy RPG’s, marrying the two together without being ham-handed. Many of these are classic tropes which live up to their classic nature. The goblin knight, guarding the bridge, is an excellent example. He disappears when the first rays of morning light strike him each day, to return at dusk to challenge all who would cross. These encounters pretty on your memory. They leverage all of the myths and fairy tales you’ve read over the years, your mind filling in the blanks and giving life to them. Excellent! Until it’s not …

Just as in the last adventure, FT0, the adventure suffers when it attempts to break away in to something larger. It’s not that it ‘breaks character’, but rather the darker imagery isn’t as successful. In FT0 the fish-men and the bug in the kitchen were, I believe, attempts to appeal to a darker, Lovecraftian, imagery. There are elements of that horror here as well, in particular with the Burnt Brides & Grooms. For whatever resin the imagery here isn’t as strong and they don’t communicate THE HORRIFIC. Just as in FT0 they tend to send more of a “just another monster” feeling. I’m not sure why. There have been strong portrays of things like this in Inn of Lost Heroes and the Fallen Jarls series, but here things just don’t seem to click. Weather it be the setting, the thumbing, or the descriptions, they just don’t work as well as they should.

This is a fine DCC adventure and my quibbles about the map and the weaker “horror” encounters shouldn’t dissuade you. This is turning out to be an excellent series.

2 Responses to FT1 – Creeping Beauties of the Woods