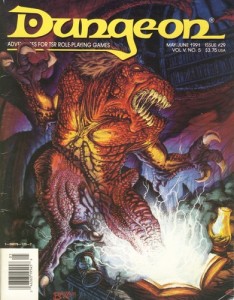 I drink heavily in order to forget previous issues of Dungeon Magazine. This makes me prone to saying things like “This is the BEST ADVENTURE EVER in Dungeon Magazine!” My humbleness is matched only by my propensity for hyperbole. The last adventure in this, from Willie Walsh, is VERY good. I’m as surprised in saying that as you are in reading it, if you’ve been following along.

This is a wilderness/cave exploration mission to find a potion for a nymph. She wants you to go to this cave full of orcs/ogres and get this potion to save her nymph sister, who has been cursed. The wilderness has three of four adventures and the cave has another twenty or so encounters. When the party comes back they find out (probably) that the nymph is actually a hag and the potion lets her regain her true form. There’s soooo much going on in this adventure, from a design standpoint, that I don’t really understand. You meet some Harpers in the woods. They are powerful and if you mess with them then you get your ass kicked after the adventure by a different group of Harpers. Why? Why not make them weak and give them some great treasure to loot? Put the big red shiny button in front of the players. The potion turns out to be a potion of magic resistance … but it only works on the hag. Why? Why not let the players use it if they want to? It’s not going to unbalance things. After the party gets the potion for the hag she attacks them. Why? They did a great job for her! WOuldn’t the game be much more fun if the party had this kind of amoral/evil associate they could go visit from time to time? Just like with theHarpers … why not give the players a choice and tempt them instead of deciding why they HSOULD do and enforcing it through the rules of the adventure? Everything in this adventure sucks. Monsters attack out of spite, even though they should have other motivations. The treasure is all book item items, and boring old +1 swords and shields at that. This should be a great little place of ruff & ready dudes, a bro-house now that the master is away. Wrestle some orcs and kick back, maybe! The adventure is SOOOO much more limiting the way it is written.

This is an exploration of an old library to recover books. It has a gimmick; the library is made up of rooms that slide around like one of those sliding tiles puzzles, you know, the ones with the empty tile spot that you slide the other tiles around? Same thing, but the rooms of the library slide around without the control of the party and they are trapped until they find out how to control it. The tiles were included as a supplement to the magazine. (Mine were partially cut out and missing two.) This has two sections: one in the buildings outside the library and one in the sliding library section. The mundane section is boring and has some hevuvas running around doing “evil things” such as “praying in a mocking way” and the like. Uh … show, don’t tell. Maybe it’s a problem with the Standards people, but I hate being told something is evil. Show me. Put some heads on stakes. Flay someone, still alive. The reaction of the PLAYERS will be better. Then again, we’re in the 2E demon-but-not-really-called-that era, so this may be a Standards thing. Idk, all I know is it sucks. Lots of long descriptions of mundane rooms with nothing interesting going on. There ARE some special mechanics listed, such as “scrambling out of a pool of water when being attacked by dismembered hands” and other sorts of things. I like these sorts of things, as long as they don’t take up too much space. They get a little long in this adventure, but I appreciate the idea. The moving rooms section is LAME. You have this very cool mechanic but it’s not taken advantage of. Instead you get a bunch of books, most of which are cursed in some way to summon monsters or kill you. And yet you need to open the books to find the puzzle solution to get out of the library. Maybe I’m being too harsh. It just seems VERY repetitive. Find book, open book, kill summoned creature. Move on. Certainly there is some room there to come up with some interesting tactics to minimize things, but 15 rooms full of this overstays its welcome. It needs other hooks. It doesn’t have them.

FUCK! After reviewing that Willie Walsh adventure I have no patience for this or Ex Libris. A ghost and a Groaning Spirit live in an abbey, according to the WAYYYYYYY too long backstory that attempts to justify every detail of everything. They ambush travelers and have a trap set up so that a mezzoloth is let out of an Iron Flask when a door is opened. This is just one of the numerous death trap adventures where everything is set up and the dice loaded against the party. “They anticipated …” this and “they have prepared …” that. It’s nothing more than an 11-room eight page 4e encounter. There’s a metric shit ton of justifications for what is going on: the pits were dug by Justin when he was soul jarred” or “the magic webs are another one of Justins creations before he was killed” and so on. Just let magic be magic. You don’t need to explain magic, Mr. Technocracy. I DESPISE these sort of set-up adventures. There are a couple of interesting treasures. A cursed scroll that causes you to grow an extra head that babbles gibberish all the time, and a music box that, when played, causes all to hear it to covet it. Also, a human skull hanging from a thick iron chain, a Greenstone amulet. These are all great. If the adventure, encounters, and rooms had detail like this then I would be lauding the adventure instead of damning it. The ghost used a wish spell to attach the Iron Flash to the back of a door. Seriously? You think that’s fun and/or interesting? That’s lazy.

This adventure is absurd, in every wonderful sense of that word. It may be the best adventure Dungeon has published up to this point. You know how good it is? I LOVED THE BACKSTORY! I HATE long backstories, but I LOVED this one. One of the things I like about D&D adventures is when the players come up with crazy ideas on how to do something and we get to watch the comedy/tragedy that unfolds as they implement their zany plan. In the same genre is the adventure where the characters are the straight men. There’s some kind of zaniness going on around the characters and the players are trying to wade through it all. This is, probably, one of the few ways to do humor in D&D, and I LOVE IT. Everything in this adventure is completely plausible and makes sense. And when you take it as a whole, as an outsider, you’ll be left saying: What the FUCK is going on here? Are you people INSANE?! This is a faction adventure. And therefore an adventure with NPC’s . These are very good things to have in an adventure. The players and their characters will always interact with the world around them, especially in a village adventure like this, and having strongly imagined NPC’s goes a VERY long way to brining an adventure to life.
[Pontification OFF]
In a small town one of the scribes has invented … a metal nib for the end of a quill. The guild of scribes now hates him. The ink makers love him. The Goose Breeders Association hates him. The paper manufacturers are in both camps. The druids hate him. Essentially, everyone in this small town has an opinion, entirely plausible. And then the scribe turns up dead. The council, divided in to the two camps, seeks an independent prosecutor to investigate. Oh, and there’s a Committee on Public Recriminations running around also. And in to this quite plausible and quite absurd set up the party is tossed. And it’s wonderful. There are mobs laying wreaths and jumping to conclusions, the competent, the incompetent, random wanderers … in fact, lets talk about the wanderers. There’s a small overland adventure to get to the village. The party is accompanied by the messenger who delivered to them the offer. Except there are two, one from each faction, and they hate each other and compete to see who’s better and yet won’t go so far as to kill each other. It’s brilliant! And then the wanderers come in to play. There are 8 or so of these and each has a little set up to riff off of. One is with a normal hedgehod. If asked, via a Speak spell, he comes down completely neutral on the issue of the quill nibs, as long as hedgehog quills are not in consideration. THIS IS BRILLIANT. EVERYONE should have an opinion! (Not all do, but as the DM I’ll sure as fuck riff on that one things and turn EVERYONE in to having an opinion!!!) This thing suffers a bit from ’the style at the time’ issues. A summary of NPC’s would have been useful and some of the text gets a bit long. But, the adventure is GOLD! If you need to suffer through one old adventure with too much text this year then THIS is the one.