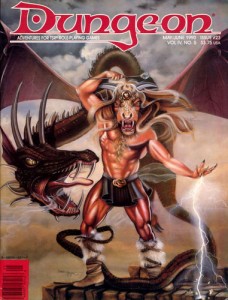 This is a Scandinavian/viking themed adventure. The party wanders around the countryside having encounters on the way to/from two adventure sites. The countryside encounter really makes this adventure, and if you read those encounters first (which are at the end of the adventure) and then go back and read the other encounters, you’ll have a much better time in your head figuring out the adventure. Giant locusts are eating the locals crops. There’s no lord, this is an independent freehold, and no one wants to invite a jarl in. The group is hired to go after the locusts while the locals are out battling the locusts. That has a hint of lameness about it; how many times have we read “we can’t be bothered” or “were busy and cant do it” as a lame excuse to get the party involved. And that’s exactly what I thought, but then the wandering encounters do something more. There are some large battles between the locals and the various bad guys. This background scenery adds a lot to the adventure and to the hook. We get to see groups of farmers and locals banding together to protect their lands. Rather than their being some paternalistic “were too weak to defend ourselves” nonsense, there is instead much greater buy in to hook. The group eventually learns some lizard men are behind things. The vibe here though is not the noble savage but rather a kind of cannibal beast-man feel, fitting in well with the lower-tech/lower-fantasy environment. Captives, refugees, burning farmsteads, wandering mercenaries, large pitched battles, all very nice and fitting in well with the lower-tech/magic theme. The first adventure site is nothing special, just a cave with shriekers and a giant toad. The second is a kind of ruined courtyard with a lot of lizard men running around in it. Or, rather, parts of it. It would have been nicer, I think, if the lizard men were out in the compound with guards, cannibal feasts, etc, instead of hold up in buildings lie the barn. But … then you get to burn the barn down and kill the folks running out, so, six of one. The mundane treasure here gets a little love, with silver-inlaid scroll tubes and jeweled dagger sheaths, but then nothing is done with the magic items. The wandering encounters are what really bring this adventure to life and add the flavor.

Evil demon is luring adventurers to their doom in a village temple. Most of the village is willfully ignoring what is going on. This has A LOT of backstory, three pages worth. It all amounts to a MOSTLY buried clocktower showing up one day in the middle of a village. Hence the “buried pyramid.” The demon at the bottom corrupts a priest and he starts modifying the local festivals to include animal sacrifices … and luring adventurers in to it. He does this by … sending out people in to the wild to spread rumors .. that they believe so detect lies/alignment/blah blah blah don’t work on them. I hate that shit. It’s a weak way for the DM to screw over the party and a crutch for not putting in the design work required to get the hook moving. The village is described in WAY too much detail. Almost every entry seems to give us a short tutorial on how medieval farming practices work. There’s also a nice section how the gatekeeper purchases vegetables from the local general store. WTF? NONE of this is relevant to the adventure. It’s absurd. Underneath the clocktower is a small portion of a ruined city. That could be cool, but there’s too many creatures hanging out in their little houses and not enough “sneaking through he ruined city” going on. There’s an attempt to add color, trolls with livestock and mephits in hawaiian shirts and fedoras, but there’s not enough interactivity to support it. It’s combined with a “bad guy wears a ring lets him control the area the undead can roam in.” LAME. Just do something else. The magic treasure is generic and the mundane treasure little; gems in particular just get generic values. I like the Marlith demon being evil and corrupting the villager thing, but the entire clocktower and ruined city are boring and generic.

This is an absurd adventure, but its got a big chaotic ending. In a port town, a lords prize fighting dog is missing and he needs it back. The party is hired, investigate, find some clues, go to a ship where the dog is, and then all hell breaks loose in three or four way fight on the ship. This may be the closest thing I’ve ever seen to an actual “big crazy pirate ship battle” outside of the movies … and there are no real pirates and the ship is probably at port when it goes down. It doesn’t mess around at the beginning but jumps right in, which is VERY unusual for a Dungeon adventure. It’s got some good city encounters, including a noble lord running down people in the street, good natured constables who shut down investigations, drunks, beggars, and gamblers. There’s a good inn encounter with a couple of loose rumors about the dog which are handled well: a minimum of words and nice little surround of “treat the staff nice/work on their defects” to pump them for information. The ship is built to be snuck on to, by a variety of means/mechanisms, from stealth to social. After that, guards & wards show up and three factions duke it out on the ship. Maybe a little more description of crazy shit to happen on the ship would be nice, but it’s an otherwise great setting for an almost mass combat. Seven pages make a tight little adventure for a great night of play.

This is a frustrating adventure with some Ogre Magi, in both an ambush and a lair, who are pretending to be someone else. There’s s nice little scene with a town meeting to start the adventure off. The various NPC’s in the town are all there, along with others, and the party just kind of stumble in to it. It feels like a real town meeting in a rough & trouble place, and the various NPCs have more color and personality to them than is usual in a Dungeon Magazine … without it being overboard. The town is a little over-described … I’m not sure I need to know the full story of how The Iron Horse Inn got its name, or that food prices ate 102% of book standard. There are a lot of rumors, which is nice, but they are a little generic and could be beefed up with some more exciting language. “A hermit lives in the wooded vale south of the pass. Don’t disturb him – he owns a powerful magic staff.” That’s too generic for my tastes. I’m looking for a story about crazy old ben who has a lazer staff , or crazy old Ichibod and how he fought off a giant by using his staff to turn him to a manta ray. Effects and color, not flavorless fact. The Magi attack the parties caravan in the pass, but they are all disguised as something else and pretending to be mages, etc. Face magic wands and staves and the like to cover up their powers. To win out the day the party needs to get of the 7 magi down to 2/3 of their HP, which causes them to flee. The lair portion of the adventure then comes in to play, with the lair housing a great number of charmed people/creatures in the service of the Magi. The lair map is moderately interesting but it suffers from the usual lack of a coordinated defense. The Magi are supposed to be super intelligent but instead tend to hang out in a single place and each area ends up being mostly isolated combats from the others. The charmed NPC’s are moderately interesting but they all attack immediately and thus die without that coming in to effect. The rooms in the ruins are not that interesting, being little more than abandoned rooms with dust and broken furniture occupied, maybe, by a charmed person who attacks immediately … in isolation from everyone else. The Ogre Magi, working together, are good opponents, and the concept of the charmed staff could have added a nice touch. The lack of social element and/or the gimmick of them pretending to be other creatures/mages when they attack, feels out of place. The lack of the fantastic in the locations, magic, and treasure, is quite disappointing.