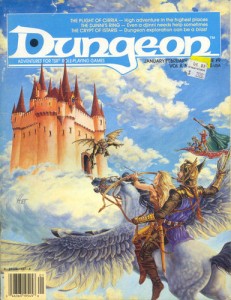 Dear Lord, why did I ever choose to do this?

Six pages that boil down to “a couple of orcs break in to a library.” The library is exhaustively described to a degree where all of the words run together and you don’t get a good picture of what it is. The party stumbles upon a scene In Media Res and are told a tentacle came through a wall and grabbed people. They are expected to look in to things and explore the library to eventually stumble upon the orcs. An effort is made to give the orcs and hostages personalities but its unclear if that’s ever going to come up in play. I suspect that the orcs are just gonna be hacked down. In spite of the length this is, in reality, just the barest outline of an adventure.

Oh boy, a full page of read-aloud! Soliloquy, HO! AND a page of useless background?!! And useless fresco’s on the walls showing suffering?!?! Say it isn’t so! A symmetrical star layout?!?! Hot diggity dirt! Ok, I’m being a bit unfair; it has some bad points but it is virtually chock full of interesting rooms. There’s a nice statue trap/puzzle in room 3, a set piece with piercers in room 4, weird experimented on ogres ala Doc Frankenstein in room 6, weird nozzles and gas in room 7, and a strange ceiling in room 8 … and so on. There’s some bullshit “only 20% of the time” and the like nonsense. This is a tournament module, and so that explains a lot of the set piece type encounters, but it’s also got some nice environments, descriptions, and the like, especially for the time in question. It’s much closer to the positive aspects of C1-Hidden Shrine than it is the crapfests that usually appear in Dungeon.

This is a Choose Your Own Adventure solo adventure with an elf in an Arabian Nights type environment.

This is a linear wilderness adventure. You’re on a mission for a village, wander down a trail meeting people, and then end up at he adventure site where the thing finishes up. One of the things I like about the OA adventures in Dungeon, thus far, is how the spirits are much closer and integrated in to the life of the surrounding lands. This adventure is no different. A remote farming village is experiencing a drought and the old head man knows that someone has to go to their sacred site and see what’s up with their protective spirit. As usual, no one in the village s brave enough to go. The party then has ten or so encounters in the wacky & wonderful world of Dungeon OA. There’s a nice fairy tale feel here, with injured animals, old wells, haughty warriors blocking a shrine, and a forceful merchant. It’s exactly the sort of content I like to see in an adventure: whimsical and fanciflul, appealing to some of the old historical tropes. There’s a good mix of combat and role-playing. I approve.

This isn’t really an adventure but rather an encounter with a ghost ship. A port town is having trouble with many of the ships coming in being attacked by a ghost ship. The characters get hired to do something about it. That entails hiring a ship and sailing out, having no encounters, and meeting the ghost ship. Which is actually just some pirate aquatic elves. Eight of them. Adventure over. There’s not really much here, in spite of the page count.

This is a tedious wilderness adventure followed by a tedious cloud castle adventure. A poly’d dragon hires you to find her mate and hands you a map. The map, a collection of symbols and directions, may be the best part of the adventure, although it’s very simple. You then get to make 80 wandering monster checks over 20 days. This takes you past a number of mundane encounters that tend toward either the environmental or normal. You also pass two monster hideouts, which at least provide a speed bump. It never amazes me how something exotic and fantastic, like a cloud castle, can be made in to something boring. The descriptions are mundane and boring. In the end you kill a couple of demons and wizards. Joy. Boring. There’s a convoluted trap room that you might be able to salvage, but not much else. It’s just a flat and boring adventure with charm, depth, and very very little interesting and gameable material.