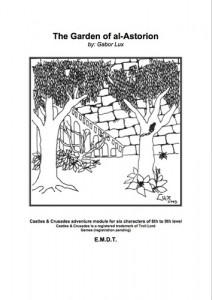 This is an adventure is a secluded valley. It presents a place for the party to wander around in, along with a kind of villain that serves as a kind of “boss fight” to entire valley setting. It’s got a great weird vibe with a lot of the ‘unusual’ mechanics and features that I love so much. ‘The Garden’ proper is lacking a bit in actually being a garden, but man the bad guy who lives there is well done in his villainy and has some nice guardians/creatures in his garden.

I apologize in advance for the crappy review. Real life has me in a slump but the only way to get out is to start back up again. I’m gonna use an older Melan thing to get back in the groove again. Gabor Lux deserves more exposure, it’s just too bad it has to be by me today. One day I need to do a compendium review of his Islands from the various mags he’s published in. Hmm, let me go put that on my list.

The adventure setting starts with about a page of background. I can’t fault that much in a 44-page adventure but what struck me about it was that it was mostly meaningless. It did very little to add to the story of the valley or help me, as a DM, run it. In contrast, the hooks and rumors, taking up about another full page, do an excellent job. There’s a great variety in both the hooks and rumors, which I love to see. Rival groups, merchants wanting to plunder the garden, and Ye Old Disappearing Mentor make up the hooks. There’s a kind of non-generic continuity thing suggested by the first two, especially the rival parties thing, which any decent DM should be able to grab on to and expand to a whole lot of fun. The rumors, twelve or so, are a decent bunch of crazy ass shit with some decent detail/imagery to them. There’s enough to work with in the descriptions to easily work them in well to a local area or a PC encounters.

The garden only makes up one part of the valley it resides in and a decent amount of the adventure is devoted to the valley setting. Rather, to the encounters in the valley. There are a number of sites scattered about, 20 or so, with the chief threat being some degenerate ape-men. There are a couple of beasts and plants to worry about, as well as a tribe of sprites. The other major foe in the non-garden section is an ogre-mage. This section of the adventure has a decent variety and some interesting encounters. There are ruins and caves and lost towers and foul beasts in ancient temples. The imagery here is pretty decent but I had frequent problems in two areas. The first is petty: the large font a larger margins combined with the long text blocks make everything run together. This make digging through the adventure more like a chore than discovery of wonder. That’s too bad because there IS a great deal of wonderful things to discover, buried in there. Secondly, the various groups within the valley don’t really seem to interact much. Except for the Ogre and the Sprites they seem to exist in a vacuum. That’s really too bad. I don’t really expect the apes and deep ones to ally with the party, but examples of internecine warfare or predator/prey stuff could have been interesting, as could EVERYONE in the valley being terrified of big al-As. In fact, that’s really a third criticism. al-As is one of the best bat-shit crazy villains I’ve seen. Everyone talks about reprobates and insane spellcasters but this guy actually lives up to his rep. What rep? you ask? Well, that’s a good point: he ain’t got a rep yet. Here we have a great mad sorcorer-type dude who has done some fuck-ed up things to people, but there’s very little to no build-up to him. If there had been some in the valley akin to what’s in the Garden then the players would be quaking tin their boots on their way to visit him. The designer has really come up with some great ‘punishments’ for the previous parties he’s caught, punishments that are safe for work, but the group will only experience them once they hit the garden proper. The garden also lacks a certain ‘garden’ quality. There are a lot of these weird gardens in modules and I’ve seen very few done well. The garden level of S3 did it ok, and the color map of Plantmaster did a decent job of conveying the garden, but otherwise gardens usually don’t end up being that cool. I just didn’t get the garden feel in this one. Gabor does a GREAT job of filling the garden with great creatures, plants and Peacoctrices and the like, but it just doesn’t ‘feel’ like a garden to me. Hmmm, maybe because my first garden was S3 and that’s the only thing I recognize now? I don’t know.

I spent a lot of time bitching above, more than I should have probably. This is a good adventure with a lot of potential. A little more work could turn it in to a GREAT adventure. I seldom do a very good jorb (Strong Bad reference!) communicating the good parts of an adventure and I don’t think I’m doing a good job here either. The valley set up is a good one with a lot of interesting features sticking out to entice players to them. Ruined temple on a hill? Murder Hobo’s …. HO! The encounters, while somewhat lengthy, have some good details and imagery in them. Locked door? Get a smith to make a new key. Pentagrams to depress, fruit to eat, and just a ton of weird shit to mess with. Weird metal rods? Let’s forge them in to magic weapons! Gabor does a decent job imbuing old-school in to something stat’d out with 3.5. Unique monsters that didn’t get come out of some book, and weird unique powers/abilities tacked on to things. Way back when I started reviewing I went through a LARGE batch of products that were clearly written for 3.5 and ten converted to an older system by simply swapping out stats, etc. None of the charm of the older products was present and thus the conversions missed the point of older play styles. This is almost the opposite. It’s like he’s taken one of the old school sandboxes from Judges Guild and restated it for 3.5, expanding the terseness of the JG original. He’s included a few good unique magic items, like the a ring of rainbow bridges (cool!) but there’s also a lot of the boring old +1 plate, +2 bastard sword stuff. Bad Hungarian! As punishment you must spend 10 years pondering this adventure and how it could be improved!

Don’t let me turn you off to this with my bitching above. It’s worth having, expanding on, and using.

Finally, I come to the real reason for this review. When you have your life-long and greatest dream crushed, get kittens. Introducing: Prince Voltan and Prince Barin! They LUV sinking their claws in to the italian sofa. 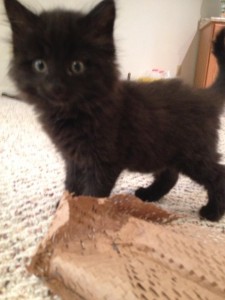 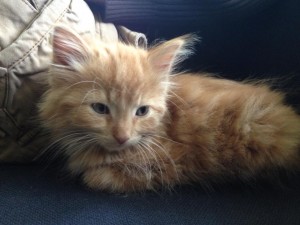 4 Responses to The Garden of al-Astorion