AA#21 – The Obsidian Sands of Syncrates 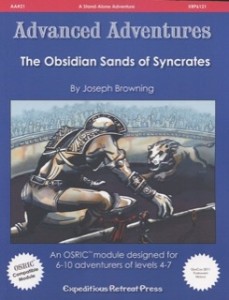 The setup is cute. While sailing back from some faraway land the parties ship becomes becalmed. After a day or so black ash starts to fall from the sky. The ships two native guides begin working themselves up, then repeatedly stab themselves in their chests with their own daggers and throw themselves over the side of the ship to drown/bleed. How’s that for a “I know something you don’t know.”? The party falls asleep, and the adventure begins …

They awaken on their ship which is now in a giant arena, miles and miles wide with the floor covered in a fine black obsidian sand. The walls are a thousand feet up and no flying abilities/spells work. In the arena is a giant marble statue of a lion and an even large marble statue of a man, while the stands are filled with other, more normals, marble statues. The statue of the man has a doorway in it’s heel. Adventure awaits!

It turns out that Syncrates is a god of entertainment. His statue dungeon acts as a proving ground; any group that can get through it and bring the giant statue to life if probably going to provide a good show for his godling guests. If the party can make it through the dungeon and figure out how to animate/control the statue then the statue and the lion comes to life and the lion attacks the statue the party is in control of. A pretty nice climactic battle to the adventure, I’d say, and a set up that seems quite a bit less absurd than most ‘proving ground’ dungeons.

The statue has 15 rooms with about 9 or so having a combat encounter, depending on the actions of the party. Two are empty, and most of the rest of the 13 or so have some kind of puzzle, even if they do also have a combat encounter. The puzzles are good ones, not too hard and not trivial, and obviously present. Look, a pentagram! Do you break the plane? Pools of liquids on the floor and some kind of contraption. Nothing to see here, move along … The worst that can be said is that the party may have to do a little backtracking to pick up a few things from other rooms they didn’t know they would need. One encounter sticks out for me: the party see what seems to be an illusion of themselves having a discussion, which breaks out in to an argument, and then a fight, which ends with the wizard fireballing the room and killing everyone. If this doesn’t ring true to the DM/players then you’ve got a total bunch of n00bs at the table. I can’t count the number of times this has happened. Both the argument and the fireball, although they usually are not related. There’s no wandering monster table, since this is a tournament module. There are a half-dozen or so new monsters which is almost welcome and certainly appropriate for a tournament module.

Despite the fact that it’s a little bit puzzle heavy and a gimmicky set up, it could work as a mini-level in a megadungeon or through the original set up scene if you wanted to use it without having a tournament. It does require a rather large group to run as written; at least five of the party have to ‘solve’ the riddle of the statue in order to animate it. as the module is written. It comes with pre-gens, so it would be great as a one-shot between other games or at a meet-up, especially if you’re fine with a player running more than one character. Overall, I’d say this is a fine example of an OSR product. A few mandatory combats, a few that can be avoided, a few that the PC’s errors can cause, and a few puzzles to figure out that are not maddening but are interesting.