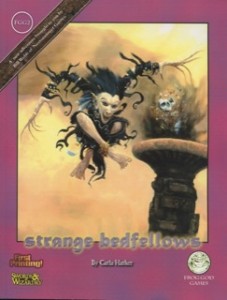 This is a longer than normal module with several parts. The module is set in the Three Points region. It’s a small collection of three villages with their surrounding fields. The villages share a common background, having been founded by three brothers. Each of the villages has it’s own character. Harmony is a village that lauds the arts and music. Stone’s Throw specializes in commerce more than the other two. Thorbold has a strong village militia and surrounding wall and believes in law & order. Each of the villages is described, and their individual characters come through well. About a half dozen individual locations are described in each village, along with their proprietor and their owners personality. Some of the villagers have small tasks that need to be done that can help serve to embed the characters in the villagers life. This runs the risk of devolving in to a series of fetch quests however if it’s handled well by the DM then it can really bring the villages to life. The leading personalities are described, as well as their involvement in the situation that leads to the core of the adventure. It seems a few years ago the village leaders got together and decided to clear a forest to make more room for their numerous sheep & goats. First, of course, the needed to hire some mercenaries to clear out the druids in the forest. What’s with these people in fantasy worlds? “Gee, we need more pasture so let’s go piss off a large group of magic-users.” How about diversifying your economies guys? Huh? How about that? As far as the villagers know, they got away with their violence scott free. There’s a pretty good wandering monster table, which in Brycelandia means that the creatures are given reason for wandering around. I like that.

A traveling circus comes to town and the villagers convince them to put on a few shows. During the last show a large group of goblinoids attack and massacre a bunch of people. The party is enlisted to find & stop the humanoids. This probably leads to an investigation of the circus, which is a little problematic for the performers, since they are actually a front for a smuggling operations and are carrying poisons and cursed magic items to sell to an evil clan in order to overthrow a local lord. So … the performers are not too amenable to having their tents searched. This almost certainly leads to the party killing some clowns and other performers before they find a hole in the ground in one of the tents. Down, Down to Goblintown!

The hole leads to a three level dungeon complex that was once home to a small village of evil gnomes. This leads to a town like atmosphere in the dungeon, with wide corridors that serve as streets & avenues. The complex has three levels and each level is occupied by a different faction of humanoids, who, as is standard, hate each other and won’t come to each others aid. HOWEVER, the humanoids on each level do have individual factions, so it’s possible for the party to work the humanoids to get information on the levels and current state of affairs. This kind of detail is gold; it really serves to turn the creatures in to real living and breathing inhabitants rather than just a set of stats waiting to be killed. In addition, each level has an “order of battle”; if a fight breaks out and help is summoned then you can follow the chart to determine when more monsters show up and who they are. I love seeing this sort of intelligent additions to modules; again, it contributes to a more realistic environment. Stooopid PC’s are gonna get their asses kicked. The various personalities on the levels, and many of the rank and file, have their own personalities detailed which allow for much more varied play … THIS is what I expect from a published product. In addition there are several tricks & traps and other sorts of dangerous situations that don’t just involve humanoids.

The dungeon levels eventually lead to an abandoned tree-top village that once housed elves. About a thousand years ago they hung an innocent man and he cam back as an undead menace. They hung the wrong guy because of an Insanity Witch that was lurking about. These two folks still lurk about the forest floor, and their backstory is very well done. The village is now inhabited by the druids who were run out of their forest, along with some guards and their animal companions. The druids have a couple of factions also, which can make for some interesting play. An order of battle is not presented which is noteworthy, for both this section and circus section, since it was presented for the dungeon levels. The party can kill the druids or try to patch things up with the villagers in order to resolve the adventure hook.

This is a good solid product, which makes it a stellar product given the large amount of dreck in the RPG adventure module market. It does have a couple of issues. First, there is no map of the villages or of the circus compound, which I would have liked. The minor quests in the villages have some pretty big payoffs: “Go deliver this routine letter and I’ll pay you 50gp” sorts of issues. The backstory of the hanged man and insanity witch are good, but how they interact with the current inhabitants, the druids, is mostly passed over with just one or two references. I’d think the druids andtheir animal friends would have more knowledge of what was going on and be more worried. It also clearly started life as a 3.5/Pathfinder product, since there are references to masterwork weapons, healing kits, and the like. I consider every edition of D&D interchangeable (except for The Abomination), so it’s not such a big deal. It’s a good adventure and should be a lot of fun for a thinking party, and a good slog for the hack n’ slash crowd.