Footprints #17 – The (False) Tomb of Horrors 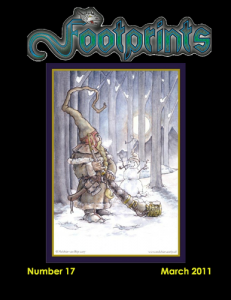 This Tomb is meant to be played prior to the real one. It has several clues to the location of the real Tomb of Horrors and some misleading encounters that will help the party get the full Tomb of Horrors experiences once they make it there. For example, there’s a green devil face whose mouth can be climbed in to and searched. This would tend to encourage players to do the same in the real Tomb, to predictable results. There are several encounters like this and several themes repeated, such as the hunt for triple keys to unlock things, etc. The triple entrance seems to be favorite of Tomb of Horrors clones and it makes an appearance once again here.

I find it super interesting that Acererak would leave real treasure in his false tomb, as well as clues to his real tomb. What’s the point of that buddy? A throne set with giant expensive rubies? What, are you just tossing those out, they aren’t worth putting in your main tomb? And why do you have that Mist of Miracles in your tomb? To give robbers wishes and experience levels? I think not. Weird.

As for the rest, you know the deal. Save or Die. Touch it and take damage. Demons materialize in. Die with no save. Go blind with no save. Generic treasure. Generic magic items Generic monsters. Yeah, it’s s super deadly tomb and the room entries are long, just like in S1. Yeah, there’s a lot set pieces and a lot of stuff that has to be used in just the right way and a lot of pixel-bitching traps and secrets and the like. It’s the Tomb. That’s what the Tomb is.

Want a Tomb of Horrors? Go get this. Or The Howling Hills. Or anything by Alphonso Warden. Those all think The Tomb is a Gygax masterpiece also. If you think the Tomb of Horrors did real damage to D&D by teaching the wrong lessons, like, say, “it’s Gygax’s masterpiece!” then this ain’t for you. Or me.

(Although … using Howling Hills and this adventure just before the actual Tomb could be cool. A kind of trail with some practice runs. If you and you players are masochists.)

1 Response to Footprints #17 – The (False) Tomb of Horrors