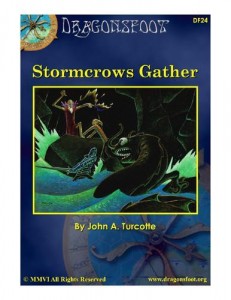 A brutal winter has fallen on the Land of Song. Weakened by incessant attacks throughout the autumn by humanoids and worse descending from the Trevärä Peaks, its hardy people now struggle against the unrelenting elements. An ancient enemy of the clans seeks to reassert her cold iron grip on the northern reaches. Sharp checks have been dealt against her and now the clans are holed up in their ancestral halls and strongholds. Waiting out the storms of ice and snow, they hope their meager stores will last.

This is a wilderness adventure with a viking theme and set during winter. It has some great little encounters and is reminiscent of a hex crawl, but with a purpose, goal, and some hints of direction. It does a very good job of invoking the feel of a epic. It feels like a tale out of myth or some Scandinavian story. A story about the heroic deeds of men without jumping the shark in to superhero land.

This is part three of the Her Dark Majesty series, set in the Land of Song. Let’s get this out of the way: this should have been the first fucking module in the series. If this one had been first then the other two, Where the Fallen Jarl Sleeps and Under Black Towen, would have been much better. If you’re planning on running these then I’d take a long hard in-depth look at this one first. I’d use it to replace all the wilderness and background in the first two modules and then run this ones quest as a part of those two or after those two. This module makes the Land of Song come alive. It’s fabulous. It feels like the land of a Scandanavian epic. The land comes alive. It doesn’t come alive because of umpteen pages of background or because of some bullshit short fiction in the beginning, like so many other bullshit modules include. It comes alive because of encounters and the little bits of pieces of text in each one that add on top of each other building towards a land with a rich history. Most hex crawls feel a bit disjointed and don’t deliver that rich history. Of course, this isn’t really a hex crawl in the traditional sense. It does have a hex map that the players will be traveling through, and there are encounters in some of the hexes. Hmmm, that’s a hex crawl. I guess it’s that rich history and sense of purpose behind the travel which make me think it’s not s hex crawl.

Those cowardly Northmen are at it again! Having saved their asses twice now the party is called upon to do it again. Please oh pleas Outsiders, go find the two missing magic war horns that we lost a long time ago. Ok, so, the hook probably works better if the party is from this land or nearby ;a kind of 13th Warrior “Uncle Thufnir wants to see us because he can’t protect his own hall” kind of deal. There’s a good selection of rumors and the players start with two to kick start their travels: Horn one disappeared over at geographic feature X during an invasion and horn 2 was given to one of the sons of Chuck a LONG time ago. Have at thee Player Characters! Unknown to the players, there are at least two other groups roaming the Land of Song who are also looking for things. One group are evil clansmen bent on discovering the horns for themselves and will ambush the players at some point. The second group has a different purpose. Having thwarted Her Dark Majesty twice now the players are the target of her anger … a diabolical hunter is after them. And WHAT a hunter! A bone devil by the name of JSJHGDJSGDK, aka “Joy Taker” wanders the land as a tall emaciated woman wrapped in a pale sheet and barefoot despite the freezing temperatures. That’s good detail. It’s a devil but not a ‘just hack it down and move on’ devil. It’s got style. It’s got theme. Just that one little brief description gets my mind going. I can visualize it. That’s exactly what I’m looking for in an encounter description. The rumors are good with a nice Scandinavian flair to them, and the section on wilderness travel lists both miles and hexes per day, exactly the way it should. It’s brief, to the point, and has exactly the information needed. The wilderness wanderers come in the form of six tables with sub-tables for herd animals and men, all broken down by terrain type. The tables are heavy on animals and light on the fantastic, which is very nice. You get giant weasels, wild boars, and spiders with a smattering of ice trolls thrown in. It feels like a wilderness table in the wild frontier of the North. Most don’t have a lot detail, being just entires on a table, but about fifteen (of a hundred or so) get some additional detail.

This one has about 25 encounters with each one taking up from about a paragraph to a column of text or so, with a handful being major sites that are a couple of pages long. This is on a map that is 32×35 hexes long, so it’s not like the party is going to be stumbling over encounters with every step they take. Instead some of the initial rumors lead to encounters which give hints to other encounters, and so on. FOr example, the Jarls favorite son was Bob. Bob went to live to live the elves over by blah bah blah. Going there perhaps means being sent to kill the great beast of Gershain, and so on. If I was in a bad mood I’ call this a series of fetch quests. The encounters are what make this stand out. The Summer-Eater is a legendary gigantic winter wolf that roams the land, moving steadily towards civilization. The Handsome Folk are a group of people who have set up a recent settlement on the shores and look completely different from the Northlanders. Mammoth Hunters, rampaging cavemen, flocks of devil birds, ghostly warriors and a few other beasts of legend all abound in the land. These all have enough information to spark my own imagination and get it going which lets me fill in the rest of the encounter on the fly. That’s exactly what I’m looking for in an encounter. There’s variety, not everything in an enemy that attacks on sight, and they all have a touch of myth to them. A couple of the adventure sites are also very open-ended. There’s a hostile settlement and there’s something inside you want … GO! Frontal assault Stealth? Deception? Diplomacy? It’s scoped down enough that as DM you’re not left wondering what to do and yet open-ended enough to allow for multiple play styles.

As is usual for this series, the mundane treasure is well done. A silver necklaces with cavorting dolphins, or a skull drinking goblet done in gold. My standard here is: would I want to keep this because it’s cool, or sell it off for GP? There’s lots of gems, jewelry, etc that I would just want to keep. Magical treasure continues to be an issue. There ARE a decent amount of unusual items in this module: magical millstones, or sails, or intelligent swords. There’s also a great number of “shield +1” or “+2 chain mail.” I’ve always felt that magical treasure should feel unique, either through description or through being very non-standard. To mimic my previous statement: is it cool enough that a player wants to keep it long after they have found something with a higher “plus”? So, decent job on the magical treasure but it could be much better.