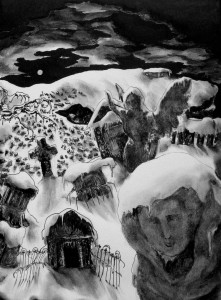 Up on a mountain sits a house by a cemetery, haunted by the memories of atrocities past. People remember that horrible things happened up on that mountain, but not exactly what those things were. Still, they stay well away, and live long and prosperous lives for their wisdom. But rumors of abandoned treasure and magic always bring those wishing to recover it. Brave, skilled men need not fear that which terrifies the common folk. The cult on the mountain is long gone, yet the music of weirdling death carries on the wind. The mountain is cold. So very cold. And the greedy and the foolish will march bravely up the mountain for gold and glory. Who Will Survive, and What Will Be Left of Their Souls.

This is probably the defining product for the publisher, the Lamentations RPG, and the designer. It has a near perfect antechamber/lead-in, lots of unguarded loot, tons of weird shit, is very deadly, and can totally change and/or wreck a campaign. It’s a perfect pick-up-and-play adventure and for cons. Running this in a home campaign is akin to throwing Tomb of Horrors at your players unannounced.

The lead-in on this adventure is very, very good. It consists of two or three parts: an old man, a graveyard, and maybe a cabin. I say maybe because at some point there a transition from the lead-in to the actual adventure. The point of a good lead-in is to transition the players from the real world of villages, towns, farmers and merchants in to the world of the fantastic. This serves a couple of purposes. It does a wonderful job of setting a mood and getting the players attitudes transitioned away from works, wives, and the IRS and in to a different mode. It also serves to note that the game world rules have just changed. The characters have entered the realm of the strange, full of deadly traps and creatures. The intro in this adventure involves a peaceful meeting with an old mountain-man. His self-given job is to make headstones for all the people sacrificed by the cult that used to live in the dungeon. He’s a disgusting old man but completely friendly. He has two good lines, beyond relating the dungeons backstory. If attacked he states “I know what happens to the souls of men who slay men. Do you?” with astonishing clarity. He also tries to physically restrain people going up the mountain, and after failing he yells at them “Your doomed. All Doomed!” This is a WONDERFUL preamble. It immediately sets the stage for whats to follow. More tension and atmosphere is added by the small area surrounding the cabin: a graveyard. The mountain man has put up hundreds of tombstones and statues. There’s a hanging tree, eerie music, scraggily dead trees, a snow covering everything, an old well, and a fresh corpse in the snow. Oh, and the souls of thousands of murdered people lurking just below the surface of reality, waiting for a Speak with Dead to be cast. By this time the party should be both quaking in their boots and terrified. This primes them for the cabin encounters, which may actually be the start of the dungeon. It’s shabby and run-down with sagging roof, and every bot of its surface covered in intricate minute calligraphy. Has the party run away yet? No? Ok. The cabin is the final room of the antechamber. It’s got some classic spooky elements. A clock that impacts time. A freaky painting. A giant book full of the names of murdered people … and a chained-up trapdoor that leads to a black pit under the earth … The party should now be completely freaked out and they haven’t even got in to the dungeon yet.

The dungeon underneath has about 31 keyed encounters and maybe 50 rooms. The map design is branching hallways with rooms hanging off of them. Not the most complex of designs. But then again, there are no wandering monsters and not really any monsters at all (for certain definitions of ‘any’) so the exploration elements of a loops map aren’t really ready to be taken advantage of anyway. The dungeon has three parts. The second portion leads to the third and both the second and third are going to require some … uh .. hard decisions to get in to. This is a good example of ramping things up in the dungeon. For example, getting in to the second part requires someone to pluck out a tooth. Getting in to the third part will require something else. There’s a great deal of unguarded treasure in the dungeon. There are also a great many ways to die and/or get SERIOUSLY maimed. It’s also pretty obvious when you are going to do something that will screw your character, so I’ve no issues with that … with a single exception we’ll cover later. The place is freaky and very atmospheric. It utilizes a lot non-standard mechanics and there are only a VERY small number of monsters, one of which offers EXCELLENT roleplaying opportunities. Oh, and the players could cause the campaign to end in two different ways. They could awaken a giant so large his fingers are hundreds of feet long. They could also cause about 12,000 undead (zombies and ghouls, mostly) to reanimate, kill them, and then proceed to devastate the known world. It’s not too difficult to make either of those outcomes come to pass … and therein lies the problem with the adventure.

The adventure is very very good. It’s also a bit slow and, tossing this at your normal campaign players, out of the blue, will almost certainly end your campaign. The designers message is that messing with things, especially those you don’t understand, will get you killed. And he’s serious about it. There’s sooooo many good things about the adventure, from the curses and other shit you can play with to the weird magic items to the reclamation of the Bless spell. And then your game probably ends. The roleplaying encounter is a GREAT one. It can also be used to keep your players alive when the dead come back to life. Soo … everyone is alive but you’ve release TWO great evils on the world. Hmmm…

It’s a VERY good adventure. It’s atmospheric. Good things to play with. Great roleplaying and tension. Maybe a little slow. And then your game probably ends. The problem with it is that the ‘game ending’ scenarios are baited traps … at least one them is for sure. It’s less making a choice and more ‘HAHAHAHA! You caused the game to end!’ I’m not cool with that, or rather, I’m not cool with the total picture. The roleplay encounter can save the party, but they have to do something they know will cause problems later. And to get to the roleplay encounter they have to find a secret door. While the world is ending. Making that secret door more obvious is probably the key to turning this from an unfun disaster to a fun ‘actions have consequences’ plot hook.