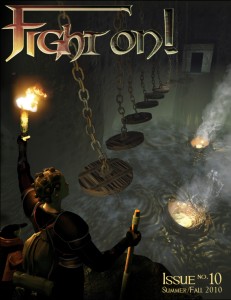 I’m working my way through reviewing all of the adventures in Fight On! magazine. It’s a great magazine that reminds me a lot of the early days of The Dragon or White Dwarf. There’s a lot of good material in each issue to get your imagination going. In particular, this issue has a large adventure setting called Lost Dragonia that’s very nice, although outside the scope of these reviews. .
Khosura – Part 2 – The Undercity
by Gabor Lux

I hesitate on reviewing this. It’s part of a series that describes a city with this portion describing the undercity. I don’t do settings, however this is close enough to a dungeon that I’m making an exception. It has a very Empire of the Petal Throne feel to it. It has … 140? keyed encounters in it spread over over … 9 maps? There are multiple ways on to and off of many of the levels as well as lots of room with nor encounters in them at all. The various encounters in the undercity range from crypts of former resident to cults and building basements. The encounters are all very well done with a lot of interesting things going on. Weak walled chambers that can flood an undercity level, a floating scepter glowing in a field of golden light, dead thieves, streams of sewage, secret arenas and, well, just about anything else you can imagine! The overall feel is a kind of undercity of Paris combined with some Tekumel. Catacombs, sewers, basements, and the like all mixed together. The create encounters range from undead to men to vermin, all highlighted in the text to make picking them out easier and many with unique properties. The magic items and mundane treasures are generally non-standard as well. I love this since it helps recreate that sense of wonder that can get jaded from always finding ‘Book’ items. This is an EXCELLENT resource for anyone planning on running a city game, either as a campaign or as a single adventure. The area is more than large enough to support repeated play and forays in to it. Build up the stories for players and they will soon dread their visits to the undercity.

The Shrine That Glittered
by Patrice Crespy

This is a strange little adventure. Either I don’t get what’s going on or the adventure sucks. It’s a little linear 19 room crawl with Morlocks, cavemen, and a medusa or two. Full monster stats in all their MULTILINE glory are present for each encounter. One state per line. That means about ten short lines of text per encounter. This seems like filler and I will never complain ever again about only seeing monster HP listed in an encounter description. It’s like some weird flash-forward to 3E or 4E stat blocks. The actual encounter rooms are generally nothing special. The mundane treasure is interesting in a primitive/bronze age kind of way, which fits well with the morlocks and cavemen. Skins, fungus, unprocessed gems and the like. One or two of the rooms and items have something interesting: an ESP skull hidden on a pillar of other skulls is a good example. I really don’t get what this adventure is trying to do. Full stat blocks for every creature but a maddening lack of detail in other areas … which the designer readily admits. It seems very uninteresting … I just don’t get it.mIt’s like the opposite of a sandbox: a linear crawl with creatures but no indication of why. It’s more like the base framework used for an adventure design contest

The Darkness Beneath – City of the Ancients
by Chris Robert

Awesomeness Alert: Carcosa was used in designing this level. The City of the Ancients level is a sandbox level in the overall sandbox megadungeon. This level is quite looser than the other level primarily because it describes a large open area, similar to a wilderness. This level is a GREAT cavern, five miles in diameter with a one mile diameter ruined city in the middle and the city surrounded by jungle. There are twenty or so set encounters within the cavern and one of them has a 40+ room complex attached to it. The other encounters are generally ‘routine’ for Carcosa: marauding war bots, space aliens, chthonic beasties etc, as well as a number of environmental hazards. he best part of this level, besides the general strangeness of it all, would have to be the factions. There are at least two major factions on the level and the adventure is ripe with suggestions on how the party can interact with the two major factions, generally to the detriment of the other faction. There’s also a very cool little scavenging table for when the party goes digging in the rubble for Goodies of the Ancients. The site locations are pretty memorable: a giant tower that extrudes effluent form the top, or a transdimensional anus that deposits refuse, sometimes still living, that a giant creature in another dimension has eaten. It’s gonzo and I LOVE gonzo. The party should have a whalloping good time fighting all the new Carcosa monsters, playing with the strange new ‘magic’ items, and getting in to trouble with the natives, which is exactly what they should be doing. On the down side: there’s a magic inhibitor in effect for a certain portion of the level, in various degrees. I’m not a real big fan of gimping the players. They earned their goodies, presumably, so they should get to use them. In this instance it’s really more a plot element rather than a crutch for poor design, but still, gimping players is not cool in my book.