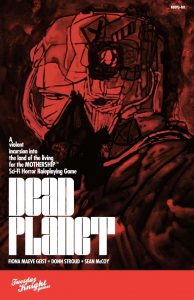 There is a planet that no ship escapes. A place where death calls like a beacon amongst the waves of the living. This is the DEAD PLANET.

This 52 page adventure for spaceman games presents a small series of “one page” dungeons, ala Stonehell, all related to a theme: being trapped in orbit around a certain planet. Colorful and evocative, runnable, with a hefty portion of the writing directed at actual play, it walks the line of performance art without getting too much up its own ass so as to be unrunnable. I often say that sci-fi is my favorite but I don’t know how to run it. I can run this.

Well hell, I don’t know where to start. This thing uses the same format as Stonehell, or The Fall of Whitecliff. There’s a general description of an area, heavy on text, that supplements a “one page dungeon.” The idea is that you read the background text and then you can run that portion of the adventure from the one page. The extra text is inspiration, background, things half-remembered and maybe a back reference for when you are running the one-pager. Stonehell did this in a format that was quite regimented and therefore easy to follow. Whitecliff did this in a more loose format, formatting things depending on the circumstances of the one-pager, social, dungeon, etc. This thing walks to the line of usability/performance art, looks down at, and does a jig on it with its tongue hanging out waggling, eyes all googley, while flipping the world off with both hands. It’s gets about as close as you can to the usability/art line. Garish colors, different fonts, immersive quotes, page backgrounds … it reminds me of Black Sun Deathcrawl or #WeAllLiveOnPunjar in places. But, at its heart, it’s using the Stonehell format. Buying in to that, as I did in my Stonehell & Whitecliff reviews, means accepting the overview text and its relationship to the adventure at the table.

This seems the correct place to mention a cult of survivors on the moon, cannibals, who ritually cul off parts of themselves for social status to feed the tribe, who also have a giant ship harpoon that shoot at ships to drag them down the moon. So, yeah, that’s kind of tone this thing has.

It does a lot right in terms of presenting information to the DM. Monsters generally lead their descriptions with the most important bits. Here’s a Glow Skull: “Brittle hyaline globes filled with phosphorescent liquid. Inside the globe, an internal skull can be seen moving within the green glow of the liquid.” That’s the first two of three sentences. It’s exactly what you need, as a DM, in order to run them.

SImilarly, the adventure provides the resources the DM needs when and where they need it. On the moon crawl there’s a short section called “how far can you walk?” There’s a timeline next to the section where the party has options on how to proceed. Huts on a plan? There a little table called “I search the bone hut.” How about that cannibal base? There’s a table focused on looting it. There’s a nice NPC summary sheet, with their quirks and goals easily seen, and thus easy for the DM to roleplay them. The emphasis on interactivity with the party, and resources to support that, is quite high. It’s almost like they thought about it and had that in mind when writing/designing/laying it out.

Did I mention the cross-references? Extensive page references exist in this. If it mentions another location, or person, or something then it also puts the page number next to it so you know where to go look for more info. That’s VERY good. In fact, one of the first such sections is “how do we get out of this system?” along with page references to the ways mentioned. Players love using scanners and sensors. The descriptions tell you what they say!

On that point, they don’t REALLY tell you what to say, the text in the sensors section gives you a general overview, allowing the DM to fill in what the characters actually get. Rather than prescriptive, it allows the DM to riff, with all the good that implies.

I like an adventure with some social elements. Hacking things is boring and its much more fun to talk to someone before you cut them down. This has that. Citing, again, the cannibal moonbase, they talk to you and ask you to surrender. Doing so brings a whole fuckton of interaction possibilities on the base. And … FACTION PLAY! That’s right, talking means you find different people with different goals and can support one side versus another and so on. This offers SO much more richer gameplay than just rolling to hit.

Which is not to say it’s perfect. Like I said, it fucks with the Art School line a little much. I’m not willing to say it strays over, but it does it enough that I raise an eyebrow and I’m certain its going to be a bit much for some folk.

Likewise not every descriptions is a good one, leading with the most important stuff. Not every monster leads with the description, some rooms lead with a history, and a decent portion of other things are NOT oriented toward actual play. This is generally around the random tables used for treasure and ship generation, but not always.

This is $8 at DriveThru. The preview shows you the first “one page” dungeon, (a derelict ship, the closest one) proper, as well as the derelict ship generator. It may have been better to show the support pages for the dungeon in question, so as to get a better idea of how the various pages and sections work together, instead of half of one section and a general rando table.
https://www.drivethrurpg.com/product/249108/Mothership-Dead-Planet?affiliate_id=1892600

The print copy is $15 at:
https://www.exaltedfuneral.com/collections/rpg/products/dead-planet

Oh, and I don’t know how I missed this my entire life [Ed: i do Bryce. You don’t pay the fuck attention.], but there’s this website called ExhaltedFuneral.com that sells print copies of this, and like a hundred other kick ass RPG things. This has GOT to be related to one of those metal-head DCC guys/artists.