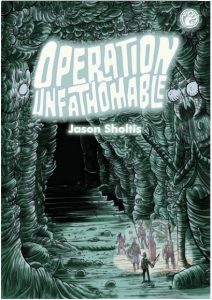 BEHOLD!!! the Underworld in all its bewildering majesty as titanic Chaos godlings and their unsavory cults make genocidal war upon one another! EXPLOIT!!! a trail of dead horrors
supplied by the recent, doomed expedition of powerful heroes! SEIZE!!! eldritch artifacts and treasures far above your lowly station! PONDER!!! the mind-bending riddles and inscrutable anomalies of reality itself in an overwhelming cascade of cosmic secrets! THRILL!!!as you throw the gauntlet of your life into the smug face of the unknowable and embark upon this OPERATION UNFATHOMABLE!!!

Unfair Advantage! Sholtis writes one of my favorite blogs, The Dungeon Dozen. It’s magnificently creative, when he’s not slacking off and not updating it. No pressure, Spudboy. Also, I tend to prefer the more simplistic & free-flowing forms of D&D, and this falls in to that genre.

This 110 page adventure contains 22 encounter areas in the cave world beneath your D&D game. Gonzo, fanciful, hyper-realistic, it is one of the most imaginative, and fun, things you will ever run. It also needs better use of bolding to call out important data and make the encounters more scanable, as well as a legible map. Still, it tends to marry the art to the writing to the layout in a way that very adventures do. IE: the art contributed rather than being filler. Easy to recommend.

The sorcorers-kings son has stolen the null rod from the Tower Impregnable and journeyed underground. The sole survivor of his expedition has returned mad, as has a guard group sent in. Guess what Level 1’s! You’re up!

What follows is a journey through the underdark unlike those seen before. This is firmly in the Weird side of the D&D spectrum, with little magical ren faire or pseudo-medieval to be found. I fucking love this shit. There’s little to no game balance present, it’s the brave little tailors vs The Strange. At heart, a pretty straightforward cave crawl looking for the pretext item, it shouts Come At Me Bro, at every turn, daring the party, over and over again, to engage. Enticing them. Luring them. Magnificent.

Fuck, back to facts. This was the results of a kickstarter, and started out in Knockspell Magazine #5. I reviewed that and loved it. The 22 rooms take up about 25 pages in the adventure, with about three rooms per page, except for the multi-room complexes, like temples. The appendices, taking up the last 25 or so pages, have the creatures and magic items, etc in them. The first fifty pages has a brief overview, the faction overview, and an extensive wandering encounter tables with monsters, strange stuff and so on.

The monsters are unique and magnificent. The magic items have a good mix of “normie” stuff, like potions of invisibility, and unique items. You even start out with some AND ITS NOT ODIOUS! I recall that giving each party member a random item was in vogue for awhile, as a manner in which to encourage creative play. The magic items given out here fit that mold, with a sword that can explode, Staff of the Magi style, offering up plenty of opportunities. The creatures and magic items are perfect, contributing to the overall weird vibe of the adventure and keeping the party on its toes. There’s no half efforts by just using book shit. This is the definition of the added value I’m looking for in an adventure.

I want to call out the art, specifically, also. I don’t usually do that. WIth very few exceptions I find that the art used in adventures are generally not evocative or inspiring. It’s filler. (And before the mob shows up, I’d like to note that I keep & display art while relegating almost all print material to PDF.) I don’t think art is generally used well. This is an exception. Almost every piece contributes directly to the evocative natures of the subject displayed. It helps bring the adventure alive by giving the DM even more inspiration than the printed word, which is what it should do.

Let’s talk NPC’s, including potential enemies encountered. From the pre-gens to the potential rival parties they come alive. The sullen guard sergeant sent with you to show you the way to the caves has already made funeral arrangements for himself. That’s fucking great. That’s a detail you can use. It makes me think he’s dressed in his finest, maybe has a coin in his mouth or has hired mourners. That’s what I’m looking for, detail that I can riff off of. This happens over and over again in this adventure. At one point there’s a terrified wooly neanderthal on a solo spirit quest. He asks questions like “What is good wooly neanderthal?” Perfection Personified.

The entrance to the caves is down a 1000’ ladder in a shaft. That’s a classic “entrance to the mythic underworld” right there. Fuck your 3e/4e/5e/Pathfinder set pieces, the parties gonna remember that ladder and climbing down it is going to set the tone and leave them scared shitless as they wander beyond. EXACTLY what its supposed to do.

Now that we’ve suitably inflated his ego, let’s talk about how Jason fucks up.

The map has a legibility issue. It’s got good terrain and level changes, lots of loops, and nice detail, but almost all of the text on it is impossible for me to read. I can read the numbers, but of all the text on the map, and there is a lot, I can only read “Start Here”, “Vault of Shaggath-Ka“and “Map of the Underworld.” Even if I take my glasses off and get close the text is fuzzy and hard to read. The PDF though DOES have the text hyperlinked, which is a nice touch.

The initial overview sections are organized well and use bolding to great effect to call out important details. It ALMOST disappears once the core of the adventure starts. It’s almost as if several different editors (or writers, whatever) were given different chunks and one person chose to highlight text with bolding while the others did not.

This is an issue because of … the text length. Jason can really get in to his descriptions, they are quite flavorful and easy to riff on, but at the cost of length. Length issues can be mitigated with organization and techniques like bolding. (IE: the highlighter.) The inconsistent nature of the bolding, mostly present in the (very sticky) summary and mostly absent wanderers/encounters, makes these sections more difficult to scan and run than I would be happy with.

Still, “Creative & hard to scan” is better than “boring and hard to scan” and “easy to scan but non -evocative.” I can fix it with a highlighter. I don’t WANT to have to fix it that’s the fucking writers/editors job, but I CAN. Well, I guess I could fix “boring” and “non-evocative” also, but then what the hell am I paying for in the first place?

This is $12 on DriveThru. The last couple of pages of the preview show you some of the weird “wandering stuff” you can encounter, and gives you a good idea of the writing style throughout the encounters.
https://www.drivethrurpg.com/product/233145/Operation-Unfathomable?affiliate_id=1892600