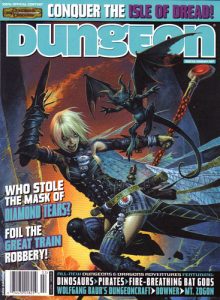 When I saw this I thought to myself ‘this better not be a fucking magical Eberron railroad adventure …”. It’s a fucking Eberron magic railroad adventure. Joy. Magic tech. Bound air elements. A need to explain everything. There are NPC’s on the train, but they get no personalities, names, or anything else. A new fucking low in adventure design, you move from room to room on the train and in each you fight someone. No roleplaying. “A big climax fight on the roof of the train! Ohhhhhh!” *yawn* The tactics porn is the only thing that matters. Fuck the roleplay. Fuck creativity. Go memorize the rules and build your min/max piece of shit character with your impotent DPS ratings. Fuck you and your “different people like different things” shit. Go fucking play Dust Tactics.

Part five of the Savage Tide adventure path. You wrecked on the Isle of Dread and made your way through the jungle to the colony of Farshore. You start out saving the colony and then wandering over the island accomplishing missions to beef up the colonies defense in prep for a pirate attack in two months. Then you defend against the attack, with everything done sofar earning you VP’s. Get enough and you win. In short the entire thing is: Do missions to Get points. There six when you first fight off the pirate raid, then five more on the island and then seven more during the big pirate invasion. The initial pirate raid and the final pirate battle both present some classic scenes: buildings on fire, pirates attacking villagers, and so on. The initial raid scenes are the best, with the final battle scenes being more in the “general crib notes expanded at length” variety. The middle section, across the island on missions, feels … disconnected? “Go see if the natives will help us” turns in to fighting fire bats, journeying across the island, and other “fetch” quests. ALL of the sections could be organized better, with better summaries and introductions and significantly cut text that instead focuses evocative atmosphere. I find myself to drawn to these “chaos decision” adventures. This one, chapter one of Hoard of the Dragon Queen (which I rewrote) and the start of DCO. I’m also not sure how I feel about them. I like the chaos and pressure to make decisions. What is seldom/never handled well is splitting the party. When you give them choices they will split to maximize outcomes and no adventure I’ve seen handles that well, either in execution or in preventing it. I like the concept presented in both the chaos/decision pressure and the “build defenses” section (and I think I’ve said down in the Troll Lord I series and a couple of Zombie Invasion type adventures) but it’s just not presented well here. Too bad, a jungle isle would be a good place for that. Time to go watch Zulu again …

Why me? What have I done? When these thoughts arise, as they do with this adventure, I recall a line from Unforgiven: deserve’s got nothing to do with it. The first real scene is the party trying to talk to a guy in a restaurant. The maitre d’ won’t let you in. You’re 13th level and that’s not famous enough. You can’t bribe him. Period. You can’t wait outside to talk to the guy, since the guard captain dimension door’d in. It’s interesting that the most obvious solution, slitting his throat and letting him watch himself bleed out, isn’t discussed at all, even though it DOES deal with attacking the guard captain.

I’d like to break for a moment and discuss society and the role of violence within it. Imagine you are a medieval lord and your neighbor brings a suit against you, claiming that your apple orchard is actually his. He wins. His serfs show up to collect his apples and you send your dudes over and kill them all. From a certain point of view ‘right’ is what you can enforce. CLoser to home, if a maitre d’ turns down your $2billion bribe for a table and you stab him 127 times in the ocular window with your pen, ‘justice’ is again at the mercy of what can be enforced. You you post bond and flee? Bribe the courts/police? Donate $1billion to EVERY politician’s campaign for a pardon/law change? Hire a small army of soldiers to break you out of jail and start a blue-uniformed paramilitary organization with cool tanks? COBRA! Is it left as an exercise for reader on why you didn’t seek mental health treatment for your entitlement issues with all that money, but, whatever. I’m reminded of the Fargo TV series and the bad guy saying something like “People live their lives by rules. Want to know a secret? There are no rules.” At 13th level you’re quite a powerful group and I can construct at least a dozen philosophical justifications for various degrees of coercion against the maitre d’. Next time you hear about one of those “Nobles had the right to kill peasants without repercussions.” remember to remind yourself, maybe the dude was a snooty maitre d’.