The Dwarves of Copper Gulch 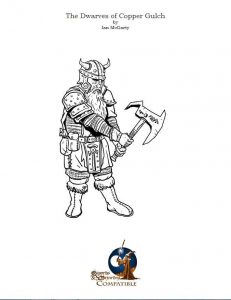 The Dwarves of Copper Gulch have returned! They seem to be a bit less industrious than before and you will have to figure out why.

This is an eleven page adventure in a small dwarven hold with around 28 rooms on two levels. It’s been taken over by goblins, who think they are dwarves. If I’m being generous, then the content is marginal. From layout to encounters to the core elements, there’s just not much thought.

Most of the adventure takes place in five pages, with two more for maps. You find a journal, or heard a rumor in a tavern, or find a map. All centering around hearing about an old dwarf hold that is rumored to be full of treasure if you can get past the traps and labyrinth of rooms. There is no labyrinth of rooms or even any traps. Instead there are goblins who think they are dwarves. Quick to anger, quick to laugh, and able to be reasoned with.

The formatting changes from one column to two. The rooms all run up against each other with no paragraph break between rooms, or bolding of their titles, making it difficult to pick out the individual rooms. The wandering monster table intro implies multiple creatures … but the table has one entry, labeled “1.” The front door is, evidently, locked with a puzzle lock. It’s not clear. There’s a handout with letters and numbers on it, but no indication of what the handout represents. There’s just this handout titled “Door Puzzle handout” that is a matrix of letters and numbers.

The treasure is all +1 axes and shields and so on, with no effort to describe or make unique. The final room has a silver statue of a bulette in it, with full stats. Does it do something? Does it come to life? Is it underneath the pit in the throne room? Absolutely no indication of any of it.

In summary: an “adventure” with no real efforts at hooks, no real efforts at formatting (Fuck man, just spend 15 minutes more on the layout to bold some room names and stick in some whitespace!) The “adventure” consists of, essentially, looting the place without getting caught by the “dwarves” …I guess? There’s just nothing here. A few monsters, some boring old room descriptions … nothing. It’s almost incoherent.

It’s Pay What You Want on DriveThru, with most of the adventure available in the preview. Page two shows the wandering monster table .. with one entry, while the bottom of the page shows the puzzle door with handout following. Page five is a GREAT example of the formatting. Whitespace on the previous page, none on this one and everything running together.https://www.drivethrurpg.com/product/210391/Dwarves-of-Copper-Gulch-a-Swords-and-Wizardry-Compatible-Adventure?affiliate_id=1892600

It’s 9:12am and I need a fucking drink after this.

7 Responses to The Dwarves of Copper Gulch