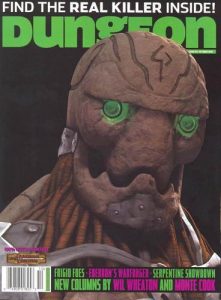 Raiders of the Black Ice
Blackmoor
By Wolfgang Baur
Level 1

Journey through the Black ice to a fortress to rescue from captured villagers. This is done over eighteen pages, with enough content to fill about five or six … maybe. It’s got a decent winter vibe, much more so than most winter adventures. From a village fight to worgs attacking a mastadon to a field of frozen corpses, it does a decent job of bringing in a variety of encounters and options for resolution that don’t just involve combat. Sneaking, talking, etc, all are involved. The wordiness though really detracts. When the content is expanded to three of four times … it makes one pull out the highlighter … and that’s NEVER a good thing. It’s not necessarily a special adventure, but if it were redone it would be a decent little thing.

Creating a setting doesn’t mean you can write a good adventure. This is a pretty classi (IE: shitty) plot based adventure that wants to be an investigation. It contains such wonders as “let the bad guy escape if they catch on too soon” and “even if they use scry, don’t give them the clues”, as well as “the DC to interrogate is 50.” Warforged are being killed and the party investigates. The ties to the killer are, essentially, non-existent, until a programmed encounter of a massacre in a bar, and even then it’s a little soft. That’s never good. The DM is routinely instructed to punish the party for good play, with the scry scenario being a good example. If the party thinks to scry, pushes their odds and makes it then they should be given helpful information. Likewise if they capture people to question the DC should NOT be 50 for a run of mill hired thug. They should be rewarded for their interesting and non-combat/non-linear attempts of actually trying to play D&D instead of a mini’s combat game. The bad guys lair is put behind a secret door and thus the adventure stalls if its not found … never a good design. Finally, the thing pushes the limits of suspension of disbelief at times. Bad guy creates a bunch of wands of soften earth so he can dig out a lair behind a broom closet. And bad guy is a warforged/robot. This kind of shit turns a potential Planescape-like interesting gritty environment in to a shit-fest with an adversarial DM.

Remember Cauldron, the volcano city? The refugees have all been taken care of easily. Consequence free adventureing, that’s what really embeds an adventure in the parties minds, isn’t it? Knowing that nothing they do matters.

This is the usual linear dungeon combat dreck. In room one, a bad guy eternally hides behind a low altar, waiting for intruders. Then there’s the will o’ wisp pets up above. Secret doors that you can’t find because they are three inches of plaster and automatically repair themselves after an hour if busted through. Oh, oh, and get this “Each plaster pillar holds a medusa rogue in temporal stasis.” There is,of course, the usual “used to be” and endless background text. This thing has, as far as I can tell, one good sentence out of its bajillion pages. Up above the dungeon, in the surface ruins, are some baboons that get eerily quiet when they see they party. “Only if attacked do they scatterm in which case they retreat in a strangely orderly, unnervingly silent exodus.” Also, unnerving is a conclusion. It’s telling instead of showing. Strike that word.