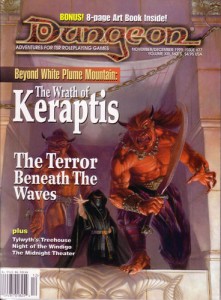 This issue isn’t too bad. Except for the feature.

Following a trail in a forest to find a missing elf. I’d call this charming and playful, if conversational and an abundance of text. It pays special attention to gnomes and their ability to speak with burrowing creatures. It’s quite specific in it’s detail of certain object, which adds a lot to the adventure. It pays too much attention to mechanics and uses several sentences where one would do, which clogs it all up with text. Creepy carving in the forest, a nicely described elf tree home (maybe the best I’ve seen), and some kobolds round out an encounter with a misanthrope. This is pretty low key but fanciful, which is how I like my folklorish adventures at first level. A powerful earthen odor with dangling roots draping an entrance? Nice! A great selection of reward items also, from folding boats to expanding 10’ poles, to oversized pipes.

A Feast of Flesh
By Peter R. Hopkins
AD&D
Level 3-5

A side-trek in a small village that is being surrounded/infested with giant burrowing beetles. This has a nice Tremors vibe going on with decent atmosphere that reminds me a lot of the scenes where they are trapped in a building, but this time it’s the entire village. Four pages and PACKED with more content than usual for a side-trek. The burrows/warren under the village are repetitive and don’t live up to the content in the village. Replacing it with one of those freaky “Living Plaque” adventures from Psychedelic Fantasies would be pretty cool. Very nice little map of the village and the warrens underneath. This could use a few events to liven things up in the village

This five page adventure is not a side-trek, but has significantly less content than the Tremors sidetrek in this issue. While camping in the snow, they party is tormented by a windigo. The abandoned campsite they discover is detailed at length, as are the four time-based events that follow. It’s all the wendigo screwing with the party. I suppose it’s meant to build tension, and I think it would do so pretty well. It is, essentially, an at length description of “surviving the night” while camped, something parties do often. “A half-hour of deathly silence settles on to the forest after the last bone falls.” That’s pretty good. The read aloud (the previous was a DM note) isn’t quite that good, but isn’t bad at all. The all too frequent “ruined by too much DM text” is rampant here, and detracts from the usefulness.

This is another White Plume Mountain, complete with some pictures to show players. . Enchantments have been placed on the dungeon that thwart any spell that transports something from one place to another, and any spell used in any way has a 25% chance of fizzling out. Joy. I’m not a fan of these; there ought to be a warning label so you know you are about to buy one. It’s serviceable for what it does, accomplishing the room-after-room challenge that these things must deliver, supported by some of the player handouts. Two paragraph read-alouds required to fortell the doom and puzzle to the players, followed by two columns of text per room to describe the DM notes and advice. How it’s actually possible to run something like this (specifically, digging through 2 columns of DM text) is beyond me.

Side-trek. A page of backstory. A read aloud monologue more than a column long. A baby slaad rips out of the chest of an actor on stage and runs into the basement. Kill it before it becomes a young slaad. The Tremors adventure could be better, but compared to the usual side-trek dreck, like this thing, it’s magnificent.

To Walk Beneath the Waves
By W. Jason Peck
AD&D
Levels 3-5

“The First Councilor is direct.” Quotes the adventure. Unlike the adventure proper, which takes forever to go nowhere. Just a few combats in this overly long adventure under the sea to find some underwater raiders. It wants to provide a magical and wondrous adventure in a strange and alien world under the sea. All it actually does is provide boring combat after combat. As with all crappy underwater adventures, it provides the party with gear to survive. Notably though, the designer references the dilemma directly in the second paragraph of the adventure: “they should possess very few if any magical items that help them deal with the undersea element. [items are provided] and by limiting the amount of such magic the DM enhances the sense of mystery and wonder inherent to this environment.” True. But the environment presented isn’t magical and wonderous, it’s boring and dull. And giving the party items deadens their own buy into the adventure. “Hey go do this mission in the magma! Don’t worry, here’s a 200 billion dollars worth of solid diamond stuff to survive it!”