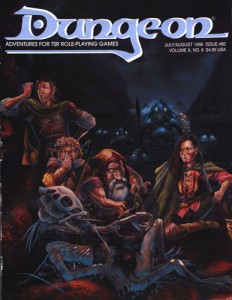 This is a monster-zoo fetch-quest adventure in the underdark. Seriously, everyone is here except Yul Brynner. Deep gnomes, duergar, drow, driders, kua-toa, myconids, mind flayers … everyone you could ever want in the underdark. I guess a lich is missing? Anyway, fetch quest. You’re given the task to collect some magic items from the underdark. Once there you move from encounter to encounter, killing the bad guys and getting new sub-fetch quests from the more friendly folk. “Sure, I know where X is, but first you need to …” There’s some decent imagery here and there: mind flayer containers made out of skulls, hanging skeletons outside a gate, and so on. It is, though, a railroad. You go through the adventure, moving from set piece to set piece, and having the encounters Maxwell wanted you to have in the way he wanted. It is, of course, possible for the DM to deviate, as it always is, but the adventure only supports you in one direction. This goes so far as “the party has no chance to detect the deception.” This is poor design. You’re forcing the thing to go down the way you want/wrote it. That’s lame. There’s a lot going on here, but not a lot of choices.

Well, it’s Planescape, and that’s a plus. It’s also mostly linear and has MOUNTAINS of text, even by Dungeon standards. Seriously, this must be the Brothers Karamazov of Dungeon adventures. A entire page for a back-alley fight in which the bad guy escapes in the first round. Nuts! It’s also sprinkled with great ideas, like the Styx boatman with a boat full of poisonous snakes. Of course a Styx crossing is window dressing! And recognizing it as such gives you the ability to make it creepy as hell. Is a linear adventure ok if it is very, very interesting? Maybe. But for the purposes of a review let’s say ‘No.’ It should be possible to convert a linear adventure into a more free-form one. The linear choice originally envisioned is only one choice. It should be possible to present an environment in which that option is available AND SUPPORTED, as well as many others … in the same page count where this adventure is concerned. There are a lot of interesting scenarios, people, and places in this, it’s too bad it’s so constrained with useless detail. Seriously, a page to describe an alley brawl?

A Side Trek adventure. The party encounters a wagon drawn by a haggered centaur, who doesn’t seem to be intelligent. A mob surrounds the wagon and it’s driver, who turns out to be an evil wizard. Cute little scene for a city/town wandering table. It deserves a paragraph, not two pages.

This is a little celtic themed adventure. The party finds a bunch of dead cattle and men. Arriving celts blame the party and they are (hopefully, eventually) tasked with bringing the true villains to justice. Tracking them back discovers a cave system with some kua-toa. The historical portions of this are nice, as is some of the imagery in the caves. The koa-toa are eating one person and watching another ones drowned body in fascination … those are some nice bits. The ‘arriving celts’ portion at the beginning, as well as the tracking back, could use a little more in the way of content and the koa-toa caves could be pared down a lot. There is a bit of an order of battle in the caves: some rooms describe who arrives when battle or light appears in the room. That’s quite nice. Just another also-ran.