The Islands of Purple-Haunted Putrescence 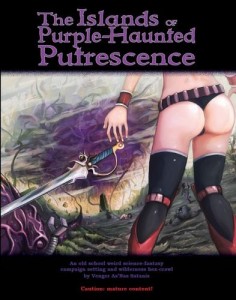 People only travel to the purple islands infrequently. It is this lack of tourism that gives it mystery. After all, everyplace is a bit weird once you first lay eyes on it. Those seeking adventure will find it. Those brought to the islands against their will should have their hands full.
This is a slightly gonzo hex-crawl on a series of three islands that are close together. There are sword & sorcery elements, gonzo elements (spaceships, time travelers, etc) and lovecraftian elements. The book has several issues, like the map, but overall they don’t detract enough from the awesome to make me not keep this. Yes, this makes it one of the few: a Bryce keeper. More than that, while I usually only do hex-crawls in PDF format, this might make it to print form … meaning I’d run it almost as-is, as opposed to mining it for seeds, hooks, and ideas.

I should note going in to this review that I love gonzo … AND you could also use this in Gamma World. It’s not the gonzo that makes this a good adventure, that’s just the icing.

This thing has a SHIT TON going on. Some may criticize the throw-everything-at-the-wall approach Venger has taken but I rather enjoyed it. It lets you pick and choose what to keep. Besides, I LOVE having a lot going on for the players to pick from. A complex and interrelated environment gives a much more solid sense of reality than the simplistic environments usually presented. In these cases, more IS better. Ultimately the strength of this book is derived from both the large number of things going on and the action-oriented nature of the hex encounters.

Action-oriented might be the wrong word. Maybe gameable content is better. ANyway, I think I covered this for the first time when I compared The Wilderlands to Hex Crawl Chronicles to Isle of the Unknown. Wilderlands and HCC had many more encounters that were written in a way to encourage interactivity. Let’s call that style Noun-Verb. Isle was written in the much flatter Noun format. “There is a bird here.” or “There is a statue here.” Compare this to the noun-verb style of “There are three mermen here hunting a wild boar.” That’s the first hex description from this particular hex-crawl, Purple. It goes on for just a bit but you get the idea. Rather than “3 mermen” or “Wild boar” it gives us something to interact with. Help them? Hinder them? Help the boar? Helping them might open up lines of communication … And so it will go at your table. The description is written in a way to encourage game play and interactivity. At least a great many of them are. It devolves at times into Noun format and that it one of the points where the book is weak. “There is a spaceship here.” is the entirety of one hex description. That is clearly pretty open ended and a DM could do anything with that. And yet, if it were a noun-verb format then you’d have yet another seed/more gameable content AND still have the noun available for the DM. The second hex described falls in this noun category as well, describing a giant skeleton graveyard littered with small totems and fetishes, and a slightly dissolved purple statue. Very interesting … but much more interesting would be something going on at this location. Overall though there is more than enough Noun-Verb content to keep the place VERY interesting.
I would also note that, unlike many hex crawls, Venger gives you some seeds to get things kicked off. These are pretty nice, in theory, and help solve one of the big Hex Crawl dilemmas: why are we wandering around? “necromancer of mount crystal, Totas Mundi, is raising an army of undead to conquer the islands. His doom hawks and zombie hordes routinely scour the main island of Korus for succulent prey,” This is just one of ten seeds given (I’d use them all, at the same time) and you can see how it might drive play. It falls down though in providing just a bit more for the DM. Just two more sentences and it would be at super-star levels. “His base is in hex 0416 and he organically expands NE. The snake-people are natural allies while the dark cultists oppose on philosophical grounds.” What this has done is grounded the seed into the actual island environment. It give the DM a place to start and provides a few reactions for some of the many factions to be found on the island.

I might pick nits that the various factions also exist in a vacuum, with their relationships to each other determined randomly. This is probably the contention between a box of legos (determine relations randomly) and an actual adventure (Bob loves Mary who hates Carl.) Either are ok, but I would suggest that things like this are to be left to change then perhaps calling them in a more organized fashion (“Chapter 2. Determining the setup of the Islands.”) might have been a better way to organize it, along with perhaps some ideas on the various implications. But, Factions! Yeah!

Here and there are bits that could use a little grounding. A great example of this is the rumor table. The first entry is “There is a blue-skinned queen that rules over the island.” That’s certainly not terrible, and is wat I would call “the usual” when it comes to rumors. I like things a bit more specific though. “The island is ruled by the 4-armed blue-skinned queen Markuva, who collects teeth.” Even better would be something like “Watch out boy! That blue-skinned bitch Markuva comes in the night to steal your teeth to use for her army to rule the island with!” Same thing, but more colorful and specific. I find these spur the imagination of the DM more than the generic form of rumor found in most products.

Finally, there’s the issue of the map. It needs some work. It is, essentially, a map of an island with a few terrain features and a numbered hex-grid overlaid on it. What’s missing is data. The party is in hex 403. They befriend mermen after helping them catch a wild pig. “Where’s the nearest village?” the party asks. Uh … I don’t know. Let me check. 15 minutes later you’ve scanned all of the entries and found a village. Placing landmarks of import on the map would have helped A LOT. As is a DM is going to have to do that themselves. Small icons of tribes, villages, domains of control (“Overlord territory!”, “Domain of the Dark Cults!”) would have all helped the map become an integral tool of the DM and kept the DM from having do this themselves, or at least minimized the effort needed.

There’s a lot of content in this book. Besides the hexes there’s A LOT of house rules, great magic items and monsters, empty dungeon layouts, and about a jillion different things going on, from crystals, to magic rain, to radiation, to … it’s easy to lose track.

This is not only a great hex crawl, it’s also a great little campaign sourcebook. Certainly worth owning.

1 Response to The Islands of Purple-Haunted Putrescence