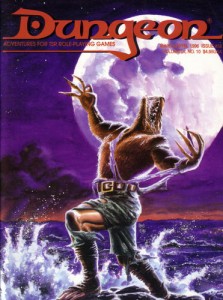 A cut-rate magical dentist has infected her patients with lycanthropy. The party gets to track the victims down since the full moon is coming in a day. This is town adventure and starts well enough for the party: someone comes into the bar and tells them the dentists office is covered in blood. I have this thing for town adventures. The idea of the party as a gang of toughs, almost mob-like, controlling a neighborhood as “protection”, either in the sinister or do-gooder sense, appeals to me a lot. Unfortunately, I have SUCH an adverse reaction to “magical RenFaire” adventures that I can’t see past that. Magic dentist. A scroll taking magical dictation. These things appeal to me in gonzo-land but not in a non-gonzo adventure. Notably this adventure has an event chart. While that’s usually a good thing, in this adventure it used to time railroad events. “At 6:15 you have encounter #4. At 7:30 you have encounter #5.” The “hunt the victim’s” theme is a good one, and includes complications such as “how do we cure them once we find them?” but it’s WAY too wordy. The dentist office takes 2.5 pages to describe … and it has three rooms.

An adventure for a single druid. I don’t review solo’s.

Challenge of Champions
by Johnathan M. Richards
AD&D
Any Level

This is a funhouse “proving ground” adventure. All spells are on scrolls and all weapons provided, no armor, blah blah blah, which is how it’s an All Levels adventure. This is more X-Crawl then it is old school funhouse. 10 challenges, all of which are really puzzles of one sort of another. It’s hard for me to recognize this as an adventure; it’s more of an evening activity in my mind.

This is a side-trek that has the party looking into a ghost in the hills, related to a tale a storyteller tells at the inn. There are two ghosts, both friendly, that lead to a cave in. You can put 1 to rest by burying him. There’s a nice magic item, a moonblade, but the party is bothered by elves if they keep it. The best part is gang of toughs in the inn that waylay the party on the way back. This would have been better had there actually been combat to weaken the party. The whole “attack you on the way back from the dungeon when you are weak” thing used to be a staple of adventures. It’s nice to see it back and to see it characterized as a gang of louts from the inn.

This hits all of the required Ravenloft notes. There is some strong horror imagery associated with several of the encounters. There are evil baddies to talk to during a repulsive dinner. There are freaky-deaky things, like a full suit of armor that bleeds. It’s got a very nice “isolated inn in a great forest” vibe at the beginning, replete with palisade. The room descriptions are focused, as far as Dungeon goes. Almost all of them have something going on, or some point to them. The number of boring old “nothing here but I’ve provided two paragraphs of text about it” rooms is close to zero. There’s a bit of faction play and the fortress is a bit open-ended, because of the willingness of some of the folks in it to talk. There’s a ring that an NPC has that prevents the detection if lying, which is super lame, but the impact is minimal because of the railroady hook beginning. Once past it the adventure really shines. Fields of bone skeletons before the gates, piles of body viscera from dumped victims, ravenous feats … a nice Ravenloft adventure. There’s a bit of Dragonlance added in, which seems to add nothing and is easily removed.

Vegapygmies in an herbal hospital in a city. Nice scene of fleeing nurses in the beginning. From there it turns into “where is the monster hiding in this room?” or “what weird thing is the monster doing in this room?” You eventually find a doctor inside who tells you of a cure elsewhere inside, and turn the pygmies back into people. A pretty simple & straight-forward adventure of looking at the bizarre thing in the room, coming up with a bizarre plan, and then moving on to the next room to repeat. Strangely, I don’t find this magical RenFaire adventure as odious as the magical dentist adventure. Herbs are more palatable? The nurses need more personality, since they have none.