Descent into the Candy Crypts 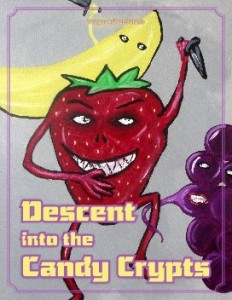 Fruit of the Doom, let’s show those candy sons-of-bitches what for!

Two pages of encounters and one page of maps in a fourteen page adventure. Even with a generous full page art allotment, that’s a bit too much for me. There’s a quarter page of additional encounters and a quarter page of new magic items, and a bit of background, but the overall effect is A LOT of white space. $3 for 14 pages is a good deal. $3 for 3 or pages is less of a good deal. I’m not sure why this is rubbing me wrong. I generally don’t care about money/price/cost but in this case I’m getting rubbed the wrong way because of the actual shortness.

The map is linear. Just one long shotgun shack of a hallway with rooms hanging off of it and occasionally one blocking the way. The one “Y” in the beginning doesn’t count. It’s linear. ANd boring. just room after room that’s 20×20 with nothing to break it up. Zzzz….. Elevation changes? No. Ledges? No. Straight & boring hallway with rooms hanging off of it? YES! If you walk straight you face three encounters before facing the candy king. Nothing interesting with the map.

The encounters are generally poor. While a great deal of creativity has gone into the actual creatures they are lost in the rooms they are put in. Ice Cream Men can cause brain freezes and donut-men can squeeze you in their holes. There’s a monster that’s a cross between a crab, squid, and winged monkey. Very nice effects. More than a little bland in their descriptions but nice in their special powers. Likewise with a few of the NPC’s you meet. A thinly applied veneer. A kiwi that speak with an aussie accent. A traitor. A homicidal marshmallow. This is the extent of the support you get for the eight NPC’s in the prison cells. Not quite the evocative flavor I’m usually looking for.

The rest of the rooms are generally barely there also. There’s really not much more than Tegal Manor of Palace of the Vampire Queen here. Just a room name (Yeah!) and a monster listing. There are brief divergences from this, but they are few and far between.

This is really the same quality as Tegal/Palace Vampire Queen. But while those also had very simple room/key encounters, they also had a large enough map and a complex enough environment to build something more through actual play. The very narrow focus of this adventure, combined with the lack of evocative writing, really limits the adventure.

1 Response to Descent into the Candy Crypts