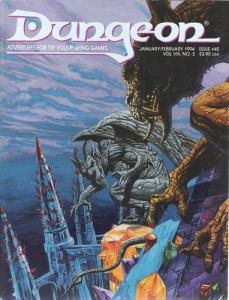 This adventure is some juveniles masturbatory fantasy. Some hot chick from a “provocative artistic race” hires you to go return a stolen necklace. SHe wears clothing with a lot of holes cut in provocative places, that’s how you know she’s provocative. And I’m pretty sure she tells you. You follow the trail to a fortress, probably assault it and kill all the drow inside, and then follow the trail to the drow ship. it’s painted flat black with yellow highlights to make it look like a wasp. K00L!!! Kill everyone, get the necklace and return. You know the deal by now: you’re not allowed to fuck with the NPC that hired you, they have powerful friends, magic and make unreasonable demands. On the plus side, it does have giant space hamsters and the drow ship differentiates between “battle stations” and “green light” stations. Otherwise this overly long adventure has nothing to recommend it. Oh, and it features a gnomish crew. A word of advice: when running NPC halfling, tinkers and gully, a little goes a LONG way. It’s often more useful to murder them all and dump the bodies (or display them proudly if you have cool DM.) “Well, it says I have blue, but I decided I wanted grey eyes.”

Three pages to describe an encounter with 4 con-men disguised as merchants. It’s not very interesting. They don’t have decent personalities, or fake gear, and don’t have any hooks/interesting things going on. Literally just 4 people each with their own generic graft.

“Charming” is probably the word I would use for this … but remember I like folklore adventures and this thing has a couple of folklore witches. It’s got a very BASIC feel to it, which is a compliment. The party is hired to bring the yearly tribute of some stew from a witches hut to a bugbear chieftain in order to maintain the peace. The witch needs ingredients and there’s a little intrigue at the bugbears. It’s straightforward, but in a good way, concentrating more than usual on the environment and the personalities. The bugbears have a jersey/gangster accent that folks try to use to portray humor in monsters. That’s pretty odious. Parts of the adventure are a little opaque, like finding the ingredients. Otherwise though, this is one of the highlights of Dungeon Magazine … a solid C or C-.

A con-man pulls up to the PC’s castle in the guise of a seer. If he’s not hired he makes prophecies and then uses his invisibility and illusion powers to make them come true. I like the premise; it’s so blatantly obvious that the ensuing role-play should be quite the jolly time, especially if you insert it into another event going on at the time like a dignitary visiting, farmers in for a contest or some such. The whole “I have exactly what I need to carry out my dastardly plan” thing is old, but not too out of line in this adventure.

This is a decent adventure marred by the style of the time. You’re going to need to photostat the adventure and make liberal use of a highlighter, and perhaps prepare some other play aids as well. For example, summarizing all of the guards/NPC on a single reference sheet with simple stats and personalities. But WITH that work you could have a decent adventure … and that work is significantly less than with other Dungeon adventures. I wouldn’t quite hunt down an issue of Dungeon for this one, but if it fell in your lap you could certainly have a decent adventure with an hour or two’s work.

A cloud castle floats overhead and a crystal falls to the ground which the party can use to create a rainbow bridge to the castle. Maybe it’s got a note attached that says “Save me!” or something like that. upstairs the castle has six spires, each of a different color. In each spire is a crystal. Place each crystal on a pedestal at the center of the courtyard and a new, white, tower appears, along with the real master of the tower. You see, a demon and evil apprentice tricked and imprisoned him, breaking his white powerstone into the separate colored crystals. (It feels like there should be a Voltron or Captain Planet reference in there somewhere.)

The towers are, of course, themed. Green=garden, blue=water, red=war, and so on. There are some puzzle elements to several of the rooms that are nicely done. And by nicely done I mean “the solution is not telegraphed to you.” For example, there’s a crystal at the bottom of a deep pool of water. Or a crystal floating up in the air. Or a crystal attached to a statue that will CLEARLY come to life if fucked with. These are best kinds of puzzles. It’s not a “put together the subtle clues to figure out you have to spin around 3.5 times while reciting the alphabet backwards under a waning moon” but rather a “use your abilities and brains to get to your goal.” THATS encouraging creativity and active play.

The room encounters/descriptions are not so badly done either. They ARE wordy, hence the highlighter recommendation, but they almost hit the mark in being evocative places. A lantern in the red tower is made of shortsword blades. The cockatrice have made a nest on the veranda, using the seat cushion and ilk, torn apart for bedding. It’s not just “they have a nest on the veranda” but rather the imagery conjured by using the cushions torn apart as bedding.