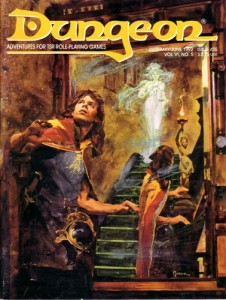 Seeing the pro’s names ad Dungeon authors reminds me of the strippers who show up at spring break wet t-shirt contests.

Adventures like this one are part of that great soul-sucking morass that drags down the hobby. The party is hired to go through a gate to a fortress on the shadow plane and bring back a staff, in order to close the gate because shadow monsters are coming through it. Turn out the guy that hired them is a rakshasa and that will free him from his prison. The hackneyed plot (lure adventurers to free me while I impersonate someone!) isn’t so much the issue as the MASSIVE amount of text that accomplishes NOTHING. This runs 12-14 pages and has maybe three or four encounters. The inn the guy lives in is described completely and realistically in the most boring fashion possible. So s the two levels of the shadow fortress and the two or three encounters in it. Page after page of backstory. Page after page of boring descriptions of featureless wilderness. Page after page of trivial detail and explanation that does NOTHING to enhance play. Three is so little content that I think you could easily do this as a one-page dungeon. The rakshassa part is lame also. Need a bad guy to launch a plot that can’t be foiled by Detect Evil or ESP? Rakshasa! puke

Uh … this is an adventure? The party stumbles on a ruin in the desert with fresh grass. Inside the small 6 room ruin they find a magic cistern of water. A friendly NPC shows up and wants to break up the cistern. An evil NPC group shows up. The cistern gets broken, the water elemental it contained gets free and kills the evil NPC party. End of adventure. This is an encounter, not an adventure. A side-trek at BEST and more likely a one-pager. But I guess it fulfills the requirement to publish a Dark Sun adventure in Dungeon. This is just devoid of anything. It’s more like watching a movie than doing something. Kill the friendly NPC? He survives so the showdown can take place. LAME. Why not just roll a d6? On a 1-5 you win, and 6 you roll again.

This is a nice little short viking-themed encounter. A whale has washed up on the beach and a group of fishermen and a grow from the local lord are arguing for ownership rights. As the party approaches one of the land-men shoots an arrow at a women in the fishermans boat. Everyone stops talking and stares coldly at each other. That’s the perfect little moment to introduce the party to the scene, at the point things could change dramatically one way or another. The two groups have several personalities and some generic men, with the personalities having some good motivations and character to drive the action forward. The fishermen WILL starve if they don’t get the whale. The land-men DO have a real claim, but it is from an unreliable person. Baur understands that these sorts of scenes are driving by the NPC personalities and describes each in a paragraph or so and provides enough little background bits THAT ARE RELEVANT to drive the action forward. This is a great tangled mess where there are lots of possible answers. Nicely done.

Middle class morality. That’s the problem with this adventure. A green dragon contacts the party in order to get five of her eggs rescued. They fell in a hole in a volcano and she needs you to go in and get them back. Inside is an assortment of vermin (who attack), magmen (who attack), grue (who attack) and an efretti (who eventually attacks.) Then you get out and the dragon attacks. Wouldn’t it be so much more interesting if you could get an ally from green dragon, or from the eftreeti? You are doing a major boon to both, and both are highly intelligent. But they attack. Lame. There’s a nice little maze on the map, some of the eggs are fakes, some are hard boiled already, and ALMOST everything in the adventure is intelligent. And attack. There’s an interesting set up or two with the eggs, traps and the like. Giving the true, magmen, efretti, orcs (who are all dead, having been sent in before you) some personality would have really made this adventure something. You could do it yourself, but then … why did you buy this magazine? There was a great opportunity for faction play, since they all hate each other anyway, and lots of opportunities to make some fire & lava themed rooms. Instead you get a lava pool or two and nothing else. The end result is Just Another Stinking Dungeon, but with a couple of fire creatures in it this time. 🙁

This is a haunted house adventure. An heir hires you to go in and help him get his ancestral treasure. There are a couple of rogues inside who are pretending to haunt the house … and some real ghosts as well. Some of the ghosts are neutral-ish (and not really ‘ghosts’ by D&D standards) and one is evil. You tool around the house getting ‘haunted’ and looking in to things and then probably meet the good-natured rogues. They, in turn, probably help you find the treasure vault, along with the goodish ghosts. Inside the vault you fight the evil ghosts. (which are really just shadows.) This is a pretty long adventure and most of the haunting things are done fairly well. There’s good advice present on how to run a spooky adventure, including he one dream sequence. I normally hate dream sequences, but this one is done ok and emphasizes the need to not do another one after it since they get old real quick. (True That.) This has a slow, investigatory quality to it. There are some vermin to kill prior to the showdown, but it’s otherwise an adventure which builds to several spooky moments. It does this better than most spooky adventures. It’s helped by the two rogues, scaring people off, who build things to a climax … and then they are probably caught, dispelling the tension. Until you find out they didn’t do everything … and then tension builds more, this time with your new helpers. Tension builds again until its dispelled by the finally meeting the real ghosts. Then there is the ominous battle of the treasure vault, that the party probably knows is coming. That sort of cycle works well. I would note that there MAY be a single problem. There are a decent number of bodies in the adventure from the olden-days. There is one high-level speak with dead spell. Completing the adventure relies on the spell being cast one ONE body in particular. I may have missed the thing that singles this body out. Anyway, good hauntings based on both room and time/event. The personalities of the ghosts and NPC’s are spread out a bit. Most detail is in one place but important other details are spread though the text, which makes running them a pain. All in all though, not a bad haunted house. Better than U1 anyway.